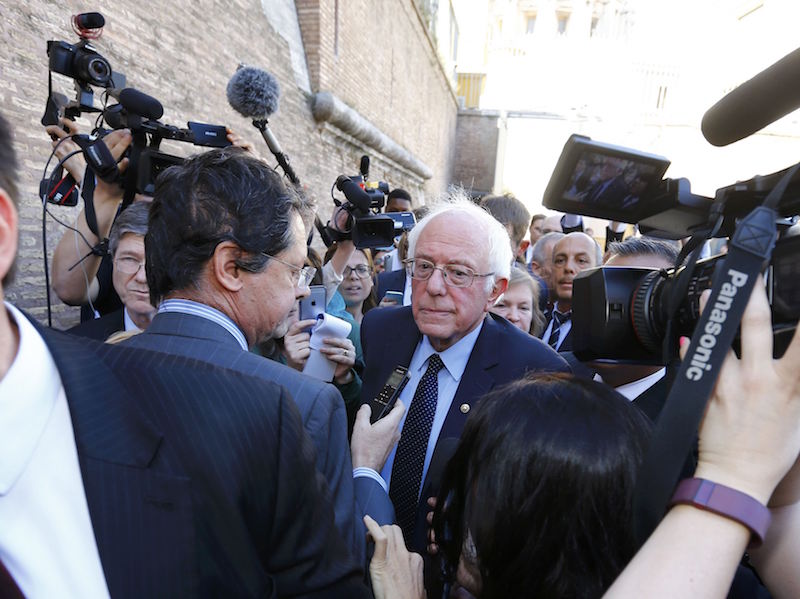 U.S. Democratic presidential candidate Bernie Sanders speaks with media and supporters during his visit to the Vatican , April 15, 2016. REUTERS/Stefano Rellandini

VATICAN CITY (RNS) In the end, Bernie Sanders got something almost as good as a picture with Pope Francis: blanket international news coverage and a chance to deliver his stump speech wrapped in the words of the pontiff, one of the most popular leaders on the planet.

Oh, and, rumor had it, a sleepover in the pope’s own Vatican guest house.

All in all, not too shabby for a guy who’s trying to catch Hillary Clinton, his rival for the Democratic presidential nomination, in Tuesday’s (April 19) pivotal primary in New York, the delegate-rich home state of both candidates.

“I believe that the pope has played an historic and an incredible role in trying to create a new world economy and a new vision for the people of our planet,” Sanders told a scrum of reporters outside the Vatican walls shortly after delivering his 10-minute address at a Vatican conference on social justice on Friday.

“What he is saying is that we cannot continue to go forward when so few have so much and when greed is such a destructive force, not only in the U.S. but throughout the world,” Sanders continued.

“I have long been a supporter of the economic vision of Pope Francis. His views on climate change have played a profound … role in turning many people’s minds around about the urgency of the moment in terms of dealing with climate change,” the Vermont senator added.

At the impromptu briefing, Sanders was also greeted by a handful of cheering supporters — more evidence of the passion he inspires among his followers, and perhaps an indication that the quick trip would pay political dividends, a calculation that was a matter of intense debate ahead of time.

Speaking to Italy’s La Repubblica newspaper, Sanders insisted that “the conference is not a political event.” The presidential hopeful also rejected the charge that his appearance at the conference was an expression of the Vatican’s support for his candidacy.

Sanders had been invited by a Vatican official to speak at a conference of the Pontifical Academy of Social Sciences on “Centesimus Annus,” a landmark social justice encyclical by St. John Paul II.

Bishop Marcelo Sanchez Sorondo, head of the academy, has said he invited Sanders because he was the only U.S. presidential candidate who showed a deep interest in the teachings of Francis.

During his 10-minute address, titled “The Urgency of a Moral Economy,” Sanders slammed the current global financial system and praised Francis’ 2015 encyclical on the environment, which called for an overhaul of the world’s approach to economics and climate change.

“As Pope Francis made powerfully clear last year in (the encyclical) ‘Laudato Si’,’ we have the technology and know-how to solve our problems — from poverty to climate change to health care to protection of biodiversity,” Sanders said.

“We also have the vast wealth to do so, especially if the rich pay their way in fair taxes rather than hiding their funds in the world’s tax and secrecy havens — as the Panama Papers have shown.”

Throughout his speech, which largely reprised applause-winning lines about Wall Street greed and the wealthy that he delivers at his campaign rallies, Sanders referred to the “common good,” a phrase that is central to Catholic social teaching. It is also invoked frequently by Francis, often in contrast to the kind of individualism that many say characterizes American society.

Sanders arrived in Rome just hours after his rambunctious debate in Brooklyn with Clinton; a nonobservant Jew, Sanders was accompanied by his wife, Jane Sanders — who was raised Catholic — and 10 family members, including four grandchildren.

Traveling straight to the conference after touching down in Rome — like many tourists, he was delayed by customs — Sanders was seated next to the president of Bolivia, Evo Morales, with whom he shook hands after the speech.

Morales had a private audience with the pope on Friday morning, during which they discussed social policy among other topics.

But as the day’s event came to a close, a similar official meeting between Francis and Sanders seemed unlikely.

In a note to the conference delegates, the pope apologized for not being able to greet them. Francis said he was busy preparing for a daylong trip to the Greek island of Lesbos on Saturday, where he will meet with refugees.

Sanders did not comment on whether he was disappointed a meeting had not been scheduled with the pope.

But church sources and some reports late Friday said that Sanders (though not the rest of his party) was in fact staying over in the Vatican guest house, the Casa Santa Marta, where the pope also lives.

That would make an “unplanned” meeting, in the hallways or over breakfast, a much stronger possibility.

It would certainly not be beyond Vatican practice to announce at a later date that a meeting had taken place.

The Democrat’s arrival at the Vatican followed a week of speculation surrounding the visit, focused largely on whether the U.S. senator would meet Francis. The Vatican asserted the presidential hopeful had been invited by a bishop, rather than the pontiff, stating no meeting between Sanders and the pope was scheduled.