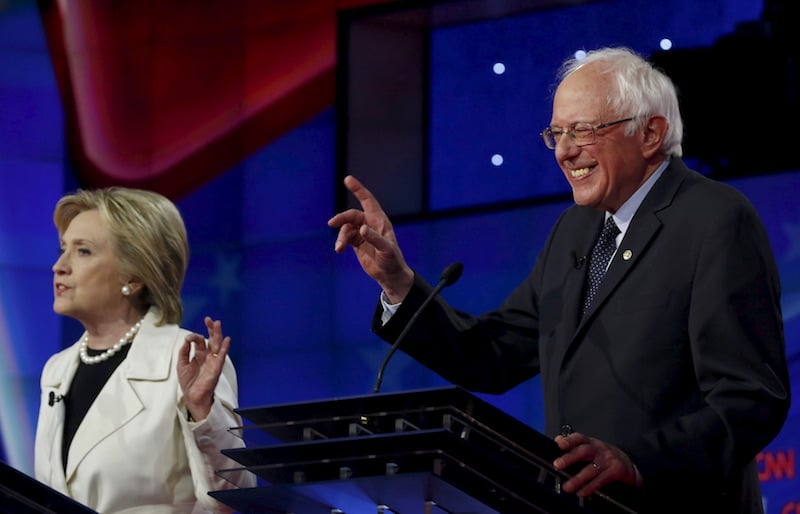 VATICAN CITY (Reuters) – U.S. Democratic presidential candidate Bernie Sanders heads to the Vatican on Friday, saying he would be happy to meet the Pope but denying his lightning transatlantic trip is a bid to woo Catholic voters.

Sanders, fresh from a tough debate with Democratic front-runner Hillary Clinton, was due to give a speech on the “Urgency of a Moral Economy” at an event marking the 25th anniversary of a landmark encyclical by the late Pope John Paul on social and economic justice.

The Brooklyn-born son of Polish Jewish immigrants has said the trip is not a political tactic but a testament to his admiration for Pope Francis and the pontiff’s views on social and economic inequality in the world.

Still, political analysts have said the visit could broaden his appeal to Catholics ahead of crucial nominating contests in a series of Northeastern U.S. states. Polls suggest Catholic Democrats currently mostly prefer Clinton.

In an interview with the Italian daily La Repubblica, Sanders was asked if his presence at the conference meant the Vatican was backing his candidacy.

“No. It is not that way. The Vatican is not involved in that. The conference is not a political event,” he said.

Sanders is expected to speak on the better distribution of global resources, the need for health care equality, and climate change, all tenets of his campaign stump speeches.

None of the participants are scheduled to meet the pope. Sanders told La Repubblica that if he did, he would like to discuss the role the United States could play in “changing the world economy from a moral point of view” and climate change.

Pope Francis wrote a major encyclical, or papal treatise, last year on the need to respect the environment.

Sanders will spend less than 24 hours in Rome before returning to the campaign trail before a New York State primary on Tuesday.