VATICAN CITY (RNS) Pope Francis brought 12 Muslim refugees to the Vatican with him aboard the papal plane following a politically-charged one-day visit to the Greek island of Lesbos intended to draw attention to the plight of migrants fleeing to Europe.

“I want to tell you that you are not alone,” Francis told people at Moria refugee camp, urging them to not lose hope.

“We have come to call the attention of the world to this grave humanitarian crisis and to plead for its resolution. As people of faith, we wish to join our voices to speak out on your behalf,” he added. “We hope that the world will heed these scenes of tragic and indeed desperate need, and respond in a way worthy of our common humanity.”

Two of the families are from Damascus while the third comes from Deir Azzor, in eastern Syria, and their homes had been destroyed in bombing during the civil war that has ravaged the country.

Their passage out of Lesbos was secured following negotiations between the Vatican and the Greek and Italian authorities, with the Roman Catholic city-state taking responsibility for looking after them. They will be cared for initially by a Rome-based Catholic organization, the Community of Sant’Egidio.

According to U.S. News and World Report, Francis told reporters as they flew to Rome together that the idea came to him only a week ago from a Vatican official. He said he accepted it “immediately” because it was in keeping with the message of humanity that he wanted to send.

The three families, including six children, had arrived in Lesbos ahead of a controversial deal last month between Turkey and the European Union to return refugees who had fled to Greece. The agreement was intended to stop the flow of migrants and refugees after more than 1 million people arrived in Europe last year.

The pope’s visit to Lesbos, the arrival point for many refugees, was arranged after Francis expressed a desire to shine a spotlight on the current situation. Although the Vatican has said it should not be interpreted as a political statement, Francis’ expression of solidarity with refugees sent a clear message to European leaders as well as the exiles. 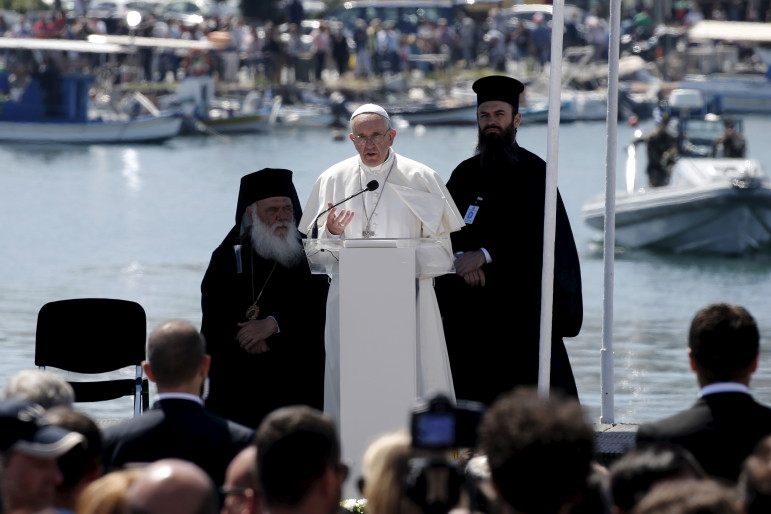 Pope Francis delivers his address at the port of Mytilene during his visit on Greek Island of Lesbos aiming at supporting refugees and drawing attention to the front line of Europe’s migration crisis in Lesbos, April 16, 2016. REUTERS/Alkis Konstantinidis

There are around 2,500 people currently at Moria, which underwent a clean-up operation ahead of the pope’s arrival. The medical charity Doctors Without Borders suspended its activities in the camp last month, stating it was appalled by what it called the “cynical agreement” between the EU and Turkey.

Francis was joined at the center by Ecumenical Patriarch Bartholomew, the Istanbul-based leader of Orthodox Christians; and Greek Orthodox Archbishop Ieronymos of Athens, who both traveled with him from the airport in a minibus to the refugee camp.

The three religious leaders greeted people staying at Moria in an emotional visit, during which some people broke down into tears and told the pope their stories, and had lunch with a small number of refugees.

As part of the short visit, a memorial was also held to the victims of migration at Lebsos’ Mytilene port. Francis, Bartholomew and Ieronymos all recited prayers and threw wreaths into the sea. So far this year 728 people have died or gone missing trying to reach Europe by sea, according to figures from the UN’s refugee agency (UNHCR).

Addressing the Greek people, Francis expressed his admiration for the way they had responded to the recent arrivals and praised Greeks as “guardians of humanity.” Pope Francis greets migrants and refugees at the Moria refugee camp near the port of Mytilene, on the Greek island of Lesbos, April 16, 2016. REUTERS/Filippo Monteforte/Pool

“Today, I renew my heartfelt plea for responsibility and solidarity in the face of this tragic situation,” the pope said. He also addressed the “legitimate” concerns of Europeans, while stating they have a duty to respect and defend human rights.

Francis’ speech mirrored a joint declaration signed with the two other religious leaders, in which they said the world could not ignore “the colossal humanitarian crisis.”

“(We) have met on the Greek island of Lesbos to demonstrate our profound concern for the tragic situation of the numerous refugees, migrants and asylum seekers who have come to Europe fleeing from situations of conflict and, in many cases, daily threats to their survival,” the declaration said.