(RNS) A year ago, when the death of Freddie Gray and resulting unrest in Baltimore filled the news, the Rev. Kathy Dwyer felt she had to do something.

“Every time I turned on the TV, I just felt like I was getting punched in the gut from watching the issue of racism just escalate in our country,” said the white pastor of a predominantly white United Church of Christ congregation in Arlington, Va.

In the wake of the continuing deaths of African-Americans at the hands of police officers, some white church leaders say they can no longer check off their racial-justice to-do list by hosting a Black History Month event. Instead, they are holding workshops that address white privilege — not experiencing or knowing the unfair treatment endured by nonwhites.

Dwyer’s church started a yearlong racial justice conversation and posted a Black Lives Matter sign that was vandalized. More than 40 members began reading books such as “The New Jim Crow” and “Between the World and Me” to better understand white privilege. And they invited people of color to speak at “sacred suppers” about their personal experiences with discrimination. The Rev. Leonard L. Hamlin Sr., a black pastor of a National Baptist Convention, USA, congregation in Arlington, said being invited to Dwyer’s church — where he spoke of being awarded one of two silver medals instead of a gold in a high school oratory competition — was different from many of the times he’s explained his experiences to others.

“You had persons who really wanted to hear it,” he said, “persons who gave more time for it.”

On Sunday (April 17), at the annual Ecumenical Advocacy Days conference, about 60 mainline Protestants and Catholics gathered in a hotel ballroom in suburban Washington for a 90-minute session called “Face to Face with Racism.” 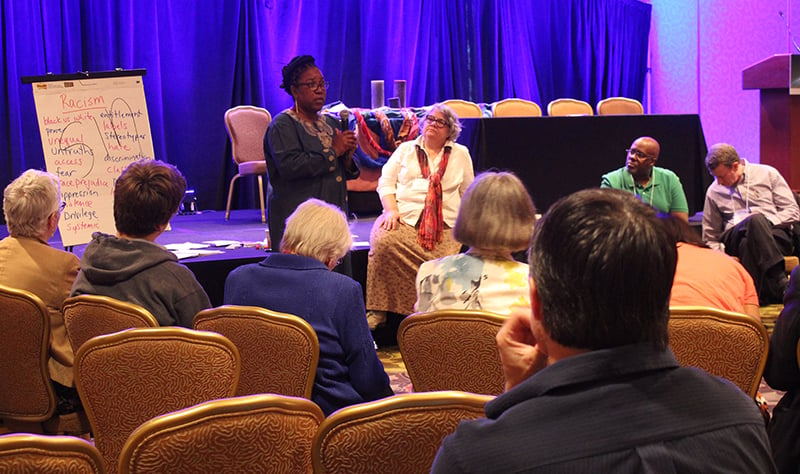 Co-facilitators Pam Nath and Yvonne Platts took turns discussing the image of an iceberg on a flip chart at the front of the room. They said it was a symbol of how oppressive power is like the tip of an iceberg, with white power looming just underneath.

“The stuff that’s hidden below the surface is bigger and more powerful and more dangerous than the stuff we can see above the waters,” said Nath, who is white, and who works with Platts, a black woman, in the Mennonite-based group Roots of Justice.

At a later point in the workshop, they led a role-playing exercise about power, in which a black woman depicted Jesus and a white man took the part of Jairus, a synagogue leader who sought Jesus out to heal his daughter.

“How are they addressing oppressive power — in the places you work and more particularly the places where you worship?” Platts asked.

In the last half-century, there have been other examples of whites addressing racial justice — from the Freedom Summer voting registration project in the South in the 1960s to anti-racism efforts in mainline Protestant denominations in the 1990s. But the focus on white privilege seems sharper now, propelled in part by the calls for change by the Black Lives Matter movement.

“Most of us don’t think about our whiteness until something brings it to our attention and sometimes that’s things like Freddie Gray,” said Kevin Skwira-Brown, a white facilitator of the “Cracking the Shell of Whiteness” class held for six weeks earlier this year at Peace United Church of Christ in Duluth, Minn.

Since the 15 people concluded the class, Skwira-Brown has received reports of how they have tried to apply what they’ve learned. One person has encouraged a medical professional to include more inviting artwork in an office instead of only images of white people.

Dwyer said a member of her church left a store without purchasing a desired item after hearing the salesclerk utter a racially derogatory statement. 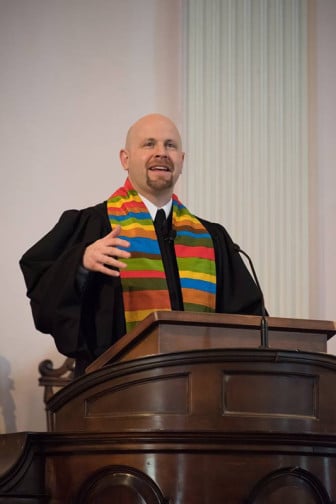 The Rev. Rob Keithan is teaching a “White Ally Course” to 21 people at All Souls Church Unitarian in Washington in hopes of helping other whites strategize on using the strength of their faith to work more effectively on racial justice.

“White people have the responsibility to educate white people about race and racism,” he said. “We can’t place all that burden on people of color. … We have to do the education.”

The Rev. Cheryl Sanders, a professor of Christian ethics at Howard University Divinity School, said issues of white privilege and white supremacy have long been discussed on the campus of her predominantly black school and in other black settings. But she celebrates the attention to them by white allies.

“To do so will make a big difference as the ascendancy of Donald Trump forces the issue upon us, that is, to acknowledge and repudiate systems that validate white male dominance while denigrating the claims and humanity of others,” she said.

But the language of “white privilege” might stop the conversation for some before it starts, said Alan Cross, a Southern Baptist minister who authored a book on racism and Southern evangelicals.

“In the South, amongst conservative evangelicals, that would be a nonstarter to use that language,” he said. “If you step back, a lot of people would agree if we talk about what we mean instead of just using the term.”

Skwira-Brown said that white attendees of classes focused on whiteness are really at the start of a long process.

“If someone is filled with pride because they see something they didn’t see six weeks ago or six months ago, they sort of have perhaps lost touch with that racial humility,” he said. “And that’s part of the challenge, is to recognize how much we have to learn.”