(RNS) When Chase Darr gathers with his family and nearly 20 friends from his congregation at his home in Columbia, Mo., to celebrate Passover, they’ll drink the four cups of wine.

They’ll ask why this night is different from all other nights and watch each others’ faces across the table as they taste the bitter herbs and dip the parsley into salt water.

That’s because Darr and his wife, Katie, are Christians.

Darr, a 31-year-old research scientist at the University of Missouri, has celebrated the beloved Jewish holiday since the Calvary Chapel church his family attended when he was in high school in Arkansas was reading the parts of Scripture shared by both Christians and Jews and reached the descriptions of festivals in the Book of Leviticus. It was spring, nearing Passover, and the pastor encouraged his congregation to seek out a seder, the ritual meal eaten on the first two nights of the holiday, he said.

He and his family attended a meal hosted by a Messianic Jew at a nearby church (Jews consider Messianic Jews to be Christians because they believe in Jesus). They were so moved, he said, they invited the man to host a seder at their church the next year, something that since has become a tradition there.

Darr has hosted his own seder, using a copy of the church’s Haggadah (the book with the seder liturgy), for the past seven years — since he moved to Missouri, where he now attends The Crossing, part of the Evangelical Presbyterian Church.

To him, the Passover story is a story of spiritual freedom, and the four cups, a reminder to him of God’s promises fulfilled in Jesus.

“It provides a rich context for Communion, and it helps to explain Jesus’ words,” he said, referring to the sacramental meal of bread and wine Jesus instituted at his Last Supper, which many believe was a Passover meal.

“I think there’s a lot to be gained just in understanding what Communion means and it really is a form of taking it. … It’s been celebrated for a very long time in similar forms, and Jesus did it, so what’s not to like?”

Darr and his family are not the only Christians who have adopted the Jewish holiday of Passover, which celebrates God leading the Israelites out of slavery in Egypt to freedom in the Promised Land.

“The lesson of Passover is a universal lesson, and it’s something that is true for Christians just as it is for Jews,” Rabbi Evan Moffic said.

In fact, Rabbi Evan Moffic said he’s noticed a greater interest in the Jewish roots of Christianity from Christians over the last 10 or 15 years.

That may be partly because of the evangelical embrace of Israel, and partly a search for roots in newer Christian traditions less grounded to history and place, according to the Reform rabbi of Congregation Solel in Highland Park, Ill., and author of “What Every Christian Needs to Know About Passover.” It may be just because we live in a “much more open world,” one in which, he pointed out, the U.S. president, a Christian, hosts a White House seder.

“The lesson of Passover is a universal lesson, and it’s something that is true for Christians just as it is for Jews,” Moffic said.

But not all Jews, or even all Christians, think it is appropriate for gentiles to host their own dinners.

“To me, you haven’t walked that path with that people. You’re taking the benefits without having suffered,” the Rev. Ann Fontaine said.

The Rev. Ann Fontaine, priest associate at St. Catherine of Alexandria Episcopal Church in Nehalem, Ore., points to the work her denomination’s Standing Commission on Liturgy and Music has done in recent years to counter what it calls “Christian anti-Judaism.” That includes language often used during the Easter season that make Jews out to be the “bad guys” who killed Jesus, she said.

To Fontaine, Passover “comes from a history of people who have suffered at Christian hands.”

“It’s a lot like people doing a sweat lodge or sun dance that are not Native American. To me, you haven’t walked that path with that people. You’re taking the benefits without having suffered,” she said. “I don’t mind if a Jewish family invites you to a seder or if a Native American group invited you to a sweat lodge — that’s OK. But to start one yourself, that’s stealing.”

The Evangelical Lutheran Church in America also has warned its congregations that “taking a tradition that does not belong to us and practicing it in our congregations could be an imitation that is not welcomed at best and very offensive at worst.”

Moffic has heard similar arguments, and he acknowledges people will disagree with him. But, he said, “To me, as a Reform rabbi, I believe our customs and stories are open to interpretation, and Christians can interpret a story just as we can.”

“I think we all read our own personal story and experiences into the Passover seder. That’s what makes it so powerful. We see our own story in it. There are as many interpretations as there are people,” he said.

Not to mention, he said, Jesus himself observed Passover. While the seder wasn’t instituted until much later, he would have shared a Passover meal with his family of disciples, traveling to Jerusalem and eating dinner and retelling the story of Israel’s freedom.

RELATED: The ‘Splainer: Was the Last Supper a Passover seder?

Darr said he hasn’t met with opposition to his family’s seder — just some quizzical looks.

He had planned to host the meal for his church small group on the Sunday before Passover (April 17), but they’ve had to reschedule because of illness. Moffic discourages Christians from hosting seders on the traditional first and second night of Passover in order to avoid the suggestion the Christian seder is replacing the Jewish seder.

Other Christians host seders on Maundy Thursday in the week leading up to Easter, the day Christians commemorate the Last Supper.

“It’s such a rich and rewarding experience. I wish more Christians would partake in it,” Darr said.

“It has the potential to hold quite a bit of meaning to anybody who participates, and I think it’s a really worthwhile pursuit for both Jews and Christians to continue to celebrate it.” 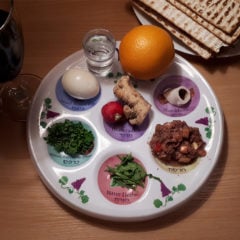 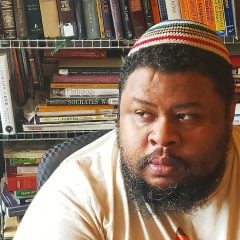