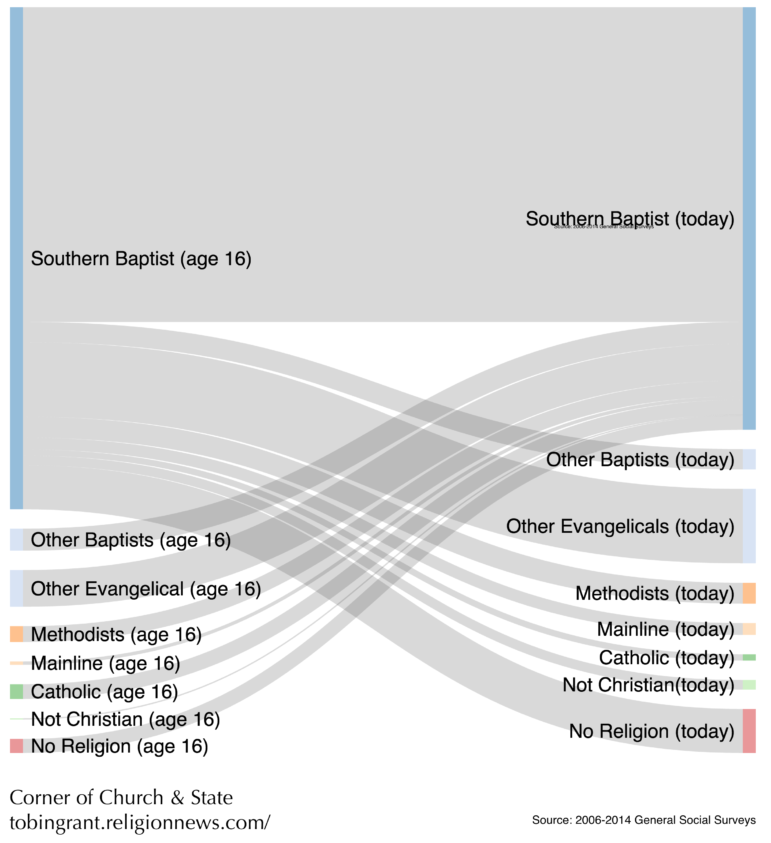 There are a lot of reasons given for the decline, but most of these explanations flow from opinion than data.

This chart can’t cover all of the reasons for the Southern Baptist Convention (SBC) decline. It could be that the number of SBC members is on the decline because there are fewer potential members. Today’s SBC members have lower fertility rates than in previous generations. Changes in the economy make it more difficult for working adults to attend church. Churches are not baptizing (converting) new members. SBC churches have also been less successful in attracting immigrants.

These are factors, but they’re unlikely to be the most important. Most of the decline is coming because SBC churches are not holding onto those who were raised in their congregations.

This chart is a snapshot of religious change. Using the results of recent General Social Surveys, I tracked 1) where people who grew up in an SBC church went and 2) where current SBC members came from.

Interpreting the chart: This is a Sankey chart. It basically combines pie charts so that you can see where people are going.The size of the bar is the relative size. This graph includes only those who were either SBC or grew up and joined the SBC. The left side shows where people were at age 16. On the right is where they are today.

Some of those who leave are replaced by newcomers. SBC churches lose members to other Baptist churches, but they gain about as many back from those same congregations. The same goes for Methodists: SBC youth grow up and become Methodists; Methodists also become Baptists.

Southern Baptist congregations are also losing members who are leaving the faith altogether. The losses here are worse than to evangelical churches. Sure, some people who grew up with no religion convert and join an SBC church. But for each convert, the SBC loses three of its youth who grow up to have no religious affiliation.

The only net-gain for the SBC are from Catholics. Very few who grew up in an SBC church convert to Catholicism. Southern Baptists are able to bring in about two Catholics for every one they lose to the Catholic Church.

The bottom-line is that the SBC’s greatest losses stem from their inability to keep their youth, who are going to other evangelical churches or leaving religion altogether.

Ahead of the Trend
Curmudgeons or not, atheists like those of other faiths more than Christians do, study finds
Follow us on Facebook!
Submit your photos to RNS