(RNS) It was an offhand tweet about Donald Trump’s anti-Semitic followers she posted after the South Carolina Republican presidential primary that unleashed a flood of hateful responses in Bethany Mandel’s notifications on Twitter.

For Dilshad Ali, it was a post she’d written online about the Council on American-Islamic Relations’ satirical “Islamophobin” campaign, advertising a spoof medication to treat “chronic Islamophobia.”

Both say that’s become part of the job of being a journalist. But for many journalists at religious media outlets, their faith is both what can make them a target and what influences their responses.

“For the most part, I can’t respond the way people will tweet at me sometimes,” Ali said.

Ali, who is Muslim, is managing editor of Patheos’ Muslim channel online and editor-in-chief of its altmuslim blog. Being hateful, being negative isn’t how her religion teaches her to be or to interact with people, she said, and that informs her interactions online, too.

Mandel, who is Jewish, is a freelance journalist who writes about politics from a conservative viewpoint for the Forward, a national Jewish media outlet.

Trolling and negative comments are something media outlets and the journalists who write for them deal with as part of the “unfortunate reality of social media,” according to Jonathan A. Greenblatt, CEO of the Anti-Defamation League. But the ADL has noticed a surge in attacks and abuse that go beyond obnoxious-but-harmless trolling.

“They’ve used Twitter to great effect to harass people, and not just to tweet mean things, but rather organize online mobs to threaten them — ‘doxing’ them, ‘swatting’ them,” Greenblatt said. 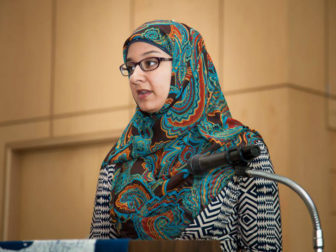 Dilshad Ali, managing editor of the Muslim channel at Patheos and editor-in-chief of altmuslim. Photo courtesy of Dilshad Ali

Internet wisdom maintains one should never read the comments, which often turn negative and unwieldy to moderate, and in recent years, media outlets like Christianity Today have begun to remove the feature from their websites.

“I think the internet would agree there was a time when comments were a really exciting way to engage and have feedback, and a lot of that happened pre-Twitter or in the early days of Twitter when it was the only way you could have a conversation with people about an article or interact with a publication,” said Kate Shellnutt, online associate editor for Christianity Today.

And there are comments that make that conversation worthwhile. Shellnutt says the “ultimate feedback” is hearing from Christianity Today’s followers who recognize themselves — sometimes literally — in the photos and articles the magazine posts about the churches.

“The great thing about having such a huge reach, even though you might need to wade through some haters or some negativity, is that we reach people who are directly affected by what we’re talking about and are represented in our coverage,” she said.

The responses Ali receives on her own Patheos blog, Muslimah Next Door, are “actually pretty pleasant.”

Writing about autism, she’ll hear from other Muslims who are empowered to be open and honest about living with disabilities, she said. And she’ll get comments from non-Muslims who say she’s changed their perceptions of Muslims and helped them realize how much they have in common — that they struggle and experience heartbreak and love their families alike.

Those are the comments she’ll engage, she said.

And Mandel said not only did she build her career on social media, but also “it’s an incredible force for good” in the world.

“You sort of have to take the good with the bad,” she said. 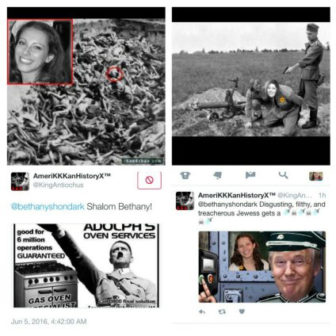 Differing interpretations of Christianity can lead to some Facebook squabbles between Christianity Today’s Christian readers, Shellnutt said. Sometimes non-Christians, who she suspects find its posts by monitoring keywords, will “throw in a statement” about topics like some churches’ stances against homosexuality. She’ll hide comments on Facebook that use vulgar language or attack people directly, and she’ll “like” those that are most pertinent to the discussion, even if they’re not the ones she most agrees with.

But, she said, “As someone who reads all of Christianity Today’s mentions, I’m generally excited people are sharing our stuff. It’s rare that I get the day I’m shaking my fist at trolls.”

Ali doesn’t write as much about her faith since moving into her editorial role at Patheos, but when she does, she said, “It is an exponentially different experience.”

She usually ignores the nasty comments that come when she writes about Islam, she said, but when she tweeted her post about Islamophobin, the responses weren’t just comments, but “near-pornographic photos and beheadings.” One of the Muslim bloggers she edits once received death threats. A conservative Christian blogger she knows, who also is hosted on Patheos, has received threats aimed at her children.

She doesn’t take down posts, and she rarely deletes comments or reports or blocks users on social media, she said. But when threats are being made against journalists and their children, she said, “What is the value? Honestly, there is no value in those comments. There is no reader engagement. There’s nothing.”

Mandel has received tweets calling her a “disgusting, filthy and treacherous Jewess” and tweets with images superimposing her face onto violent Holocaust imagery. Some referenced the fact she had been the victim of a sex crime, something she had written about before, showing they had done “diligence in finding out who I am and what button to press, which was a little freaky,” she said.

She was “doxed,” her personal information published on an anti-Semitic website, she said.

She’s written about how she ended up buying a gun to protect herself, and she filed a police report after she received death threats via Facebook.

“There’s the ‘get back in the oven,’ ‘you and your kin should be dead,’ ‘you should just kill yourself.’ That doesn’t bother me as much. It’s the people who are fixated — those are the people who could show up at your house someday,” she said.

And Mandel isn’t the only one on the receiving end of anti-Semitic attacks online. Julia Ioffe was similarly harassed online after publishing a profile of Trump’s wife, Melania Trump, in GQ, and New York Times editor Jonathan Weisman recently wrote about his decision to quit Twitter after he received a barrage of anti-Semitic comments and the social network declined to take action.

Google also recently removed an anti-Semitic Chrome extension called “Coincidence Detector” from its app store, and the Anti-Defamation League has added the “echo” symbol — three parentheses around a name, used to single out and target Jews online — to its online hate symbols database.

The ADL also launched a Task Force on Hate Speech and Journalism including both Mandel and Ioffe earlier this month to look into a spike in the online harassment of journalists by what Greenblatt called a “loosely organized movement of extremists.”

“There are questions about how does one measure that in the new digital age. Our stalking laws, if you will, and questions of free speech, if you will, have not necessarily been updated to reflect the reality of an online environment where how we socialize and how we shop and how we spread ideas — all of it is now happening online,” he said.

Mandel isn’t really sure what more can be done besides blocking abusive accounts on social media.

And Ali doesn’t tend to block those commenters who are “disrespectful of things that I hold dear,” including saying “disgusting” things about her faith and “really repulsive” things about the Prophet Muhammad.

“I think, listen, you’re first and foremost a journalist and everybody’s not going to agree with you. Everybody’s not going to think the way you think. I know that, so I rarely block for that,” she said. “It pains me like anyone when something is important to them, but that’s a line that’s kind of a blurry line to me I debate all the time.”

Shellnutt said her responses are guided by Christianity Today’s mission of “beautiful orthodoxy,” of what’s “beautiful, true and good” inspiring not only what the magazine covers, but also how it covers it. That means that she always will answer people’s genuine questions because “truth is important” and that she can “concede and not feel like my reputation lives or dies by it,” she said.

And faith is partly why Ali said she doesn’t engage: That requires a “hard shell to deal with all the nastiness that comes.” That’s not part of the “Adab,” the manners she was taught through her Muslim faith, she said, and she doesn’t want to compromise that.

“With that in mind, I don’t want to lose whatever softness (I have). … I don’t want that part of me to change that much in response to what gets thrown at me online, and that’s something I think about a lot,” she said.