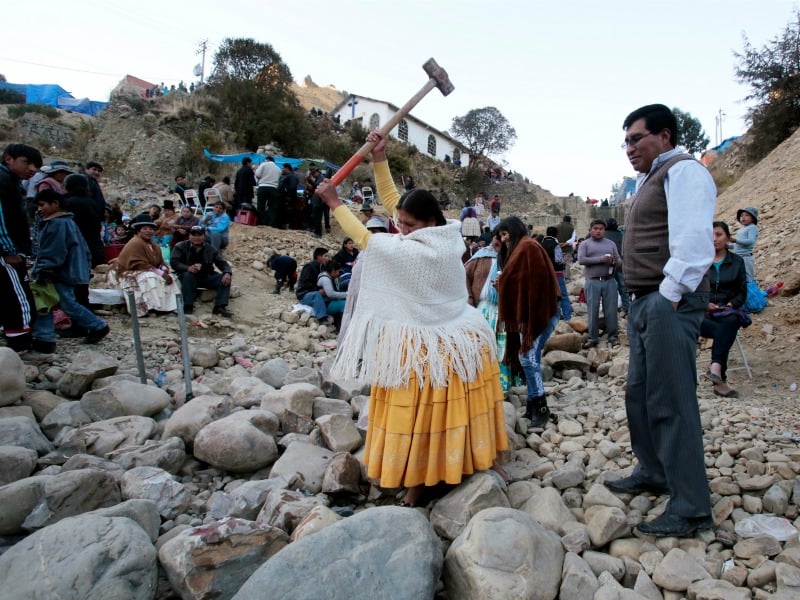 An Aymara woman tries to break a rock with a sledgehammer as part of the celebration of the Virgin of Urkupina on Aug. 15, 2016, on the outskirts of La Paz. Photo by David Mercado/REUTERS
August 17, 2016
RNS staff

(Reuters) Every year, in the third week of August, thousands of Bolivian Catholics gather on the outskirts of capital La Paz to take a swing at fortune by breaking rocks.

The rite is performed to call for the blessing of the Virgin of Urkupina.

Legend has it that Virgin Mary appeared to a shepherd girl to instruct her to take rocks from this dried river that miraculously turned into silver when she reached home.

On Tuesday (Aug. 16), pilgrims struck rocks to try to improve their fortunes.

When a rock is easily split, their wish will be soon fulfilled. If believers have more difficulty striking and splitting the rock, it will take more time.

"You can ask for a house, a car, all your wishes are fulfilled," said believer Ricardo Tarqui. "I broke the rock with a second blow and in a third attempt. I have been able to buy a house and also a car."

While Bolivia is a largely Roman Catholic country, it has kept its strong indigenous roots.

This unique ritual, mixing Catholic and local culture, hits a sweet spot with many pilgrims from around the country and abroad.

Related Posts
By Alejandra Molina
Who is Junipero Serra and why are California protesters toppling statues of this saint?
By David Crary
Amid pandemic, scores of US Catholic schools face closure
By Alejandra Molina
On LA’s Skid Row, Catholic Worker’s ‘Hippie Kitchen’ adjusts to COVID-19
By Bill Baker
A conversation with Father James Martin: 'Why did God let this happen?'
By Emily McFarlan Miller
Paczki Day brings Chicagoans together for one last indulgence before Lent