Mother Teresa presents documents for a new house to a villager from Latur in Bombay on Sept. 26, 1994. Photo courtesy of REUTERS/Savita Kirloskar *Editors: This photo may only be republished with RNS-MARTIN-TERESA, originally transmitted on Aug. 31, 2016.
August 31, 2016
David Gibson

(RNS) The Rev. James Martin is a Jesuit priest and popular author who wrote about his lifelong fascination with the saints and the many aspects of sainthood in the Catholic tradition in the best-selling book “My Life With the Saints.” 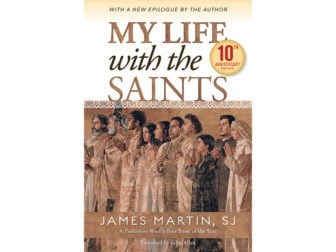 "My Life With the Saints" is a spiritual memoir by the Rev. James Martin, a Jesuit priest. Cover art courtesy of Loyola Press

Loyola Press is issuing a 10th anniversary edition of Martin’s memoir in September, which also coincides with the Sept. 4 canonization of Mother Teresa of Calcutta, who even during her lifetime – she died in 1997 – was regarded by millions as a “living saint” for her work with the destitute in India and around the world.

Of course, “living saint” is an oxymoron, since a saint is someone who has died and gone to heaven. Canonization is the last step in the process by which the church officially declares that yes, someone is in heaven and is worthy of veneration as a spiritual role model, and as someone whom the faithful -- through prayer -- can ask to intercede with God on their behalf.

Though she was not yet a saint, Martin wrote in his book about Mother Teresa – soon to be St. Teresa of Calcutta – and has subsequently written widely about revelations in letters published after her death that she experienced a long stretch of “spiritual darkness.”

Martin, an editor at the Jesuit-run weekly America magazine, spoke with RNS about Mother Teresa and sainthood in the modern era. This interview has been edited for length and clarity.

Q: Why do you think your book struck such a chord with readers?

A: Perhaps people were ready to hear about the saints in a new way. Perhaps they were taken by the real life stories of the saints, which in the past had sometimes been overwhelmed by layers and layers of pious legend. But their real lives are much more interesting than the legend. There’s no such thing as a dull saint’s life.

A: In general, many Catholics still don’t have access to hard facts about the lives of the saints. One of the biggest surprises after writing this book was that people would come up to me and say, “I had no idea Thomas Aquinas’ life was so exciting! All I knew was that he was a medieval theologian and that he wrote the 'Summa Theologica.'”

But the idea that Aquinas’ brothers kidnapped him to keep him from joining the Dominican order and that his family threw him into a cell, and they even sent a prostitute to tempt him, was somewhat surprising to most readers.

Q: Not everyone you wrote about in your book was officially a saint. Dorothy Day is now on the track to sainthood, and Pope John XXIII was only canonized after your book was first published.

A: In my new epilogue I answer three of the most common questions that come up in talks and interviews, and one of them is: Why did you include people who are not officially saints? The answer is that it’s a much broader way of looking at sanctity, and the fact is that in the early church there wasn’t an official canonization process anyway. There wasn’t a Vatican process because there wasn’t a Vatican as we know it. 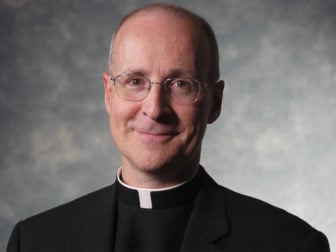 The Rev. James Martin, a Jesuit priest and author of "My Life With the Saints." Photo courtesy of Nutopia

One other person I wrote about who is not on the canonization track is Thomas Merton (the famous convert, Trappist monk and author who died in 1968). But I have him in the book because I am using the term “saints” as much broader than just canonized saints. It’s more in the sense that St. Paul used it, as “holy people of God.” In my view, Merton certainly qualifies on that score.

Q: Pope Francis has on occasion dispensed with the requirement that at least two miracles be ascribed to the intercession of a saint before they can be canonized. Why is that?

A: For the most part, Pope Francis is following the traditional path, which is to wait for a popular devotion to grow up after the death of a holy person, have the local bishop introduce the cause for sainthood, have the postulators do their work, wait for the miracles, have the Vatican’s Congregation for the Causes of Saints do their work, and then present it all to the pope for his approval.

But sometimes he does dispense with the need for two miracles to become a saint, as in the case with St. Peter Faber (a co-founder of the Jesuits in the 16th century), who Francis decided to canonize in 2013.

Funny enough, I had always been opposed to the idea of dispensing with miracles because I thought in a sense it cheapened the process a little bit. But once he decided to do it with Peter Faber I thought it was a great idea because Faber’s a Jesuit! So obviously it’s pretty subjective.

Still, in the current Vatican process the miracles are necessary for the canonization to go ahead. But miracles don’t make the saint. God makes the saint. It’s just the question of the church recognizing that. So in that sense it doesn’t bother me.

Q: So you think the miracles requirement is still important?

A: Yes. It’s a confirmation for the people of God that this person is definitely in heaven. We have to be careful to note that we are praying to a saint to intercede for us, to pray for us in order that a miracle might happen. A saint doesn’t do a miracle himself or herself.

But I still think it makes sense to have the miracles requirement because it really drives home the point that this person is worthy of veneration.

Q: How does Mother Teresa, who was known as the "Saint of the Gutters" for her work with the poor, stack up among the thousands of saints that have been canonized over the centuries?

Now, why do I say that? Other saints have done what she did – found a religious order, work with the poor, lead a life of outstanding holiness. Many, many saints have done that. None of them, however, have done that without the benefit of a rich interior prayer life, which is what she had to confront in the last 50 years of her life.

We know from the publication of her diaries and her letters that she suffered this “dark night” for the last half of her life. None of the saints had to do the kinds of things she did on an empty tank. So for me that makes her the greatest modern saint.

The great irony is that this most traditional of saints becomes the patron for people who doubt, people who seek, people who are agnostic. She becomes the “Saint of the Doubters,” which no one would have suspected during her lifetime.

Q: We also see what some say is a new age of martyrs, especially with the persecution of Christians in the Middle East and even the murder of an elderly priest, Father Jacques Hamel, while he was saying Mass in France. Does this indicate something to us about who the saints are today?

A: The martyrs will always speak to us because their lives are the ultimate gift to God. A martyr is not someone who courts death. The martyr is someone who stays in his or her place, usually with the poor or the marginalized, and accepts death as part of God’s plan for him or her.

READ: Should Father Hamel be a martyr?

Jacques Hamel, Dorothy Stang (an American nun killed in Brazil in 2005 for working with the indigenous people of the Amazon Basin), the Jesuit martyrs of El Salvador (murdered in 1989), certainly Oscar Romero (the Salvadoran archbishop shot dead while saying Mass in 1989) – they’re all saints.

It’s just a question of when the church is going to recognize that. Clearly, anyone who gives their life for Christ, particularly in the face of persecution, is a martyr and therefore in my mind a saint.

Related Posts
By Claire Giangravé
Vatican Museums used to be an overcrowded ‘hell,’ say tour guides. COVID-19 may change that.
By Alejandra Molina
We have a story to tell: Indigenous scholars, activists speak up amid toppling of Serra statues
By Claire Giangravé
Top Vatican investigator on sex abuse says church must empower victims
By Claire Giangravé
In video, Cardinal Pell details his time in prison before being cleared in abuse case
By Claire Giangravé
With tourism and giving down, Vatican tightens belt. It may not work, despite Pope Francis’ hopes.