(RNS) The words, “Let us now praise famous men,” are found in the Wisdom of Sirach, an ancient Jewish ethical text, and they then appear about 21 centuries later as the title of James Agee’s well-known 1941 book.

Many Americans are familiar with the significant interreligious contributions of “famous” spiritual leaders of the past whom we “praise,” including Popes John XXIII and John Paul II, the Rev. Martin Luther King Jr., the Rev. Reinhold Niebuhr and Greek Orthodox Archbishop Iakavos — all of whom built human bridges of mutual understanding and respect between Christians and Jews.

But we must also “praise” those not so “famous” people who take the ideals expressed in elegantly worded interreligious proclamations and lofty statements and transform those abstractions into flesh-and-blood realities in the American and international public arenas.

Such a person is the Rev. William Hall Harter who is marking his 80th birthday with a joyous celebration in Chambersburg, Pa., on Saturday (Sept. 17). 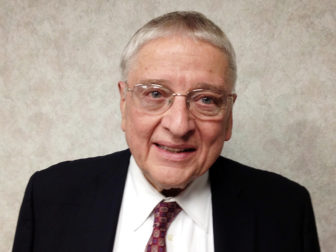 Bill Harter, my friend and colleague for many years, is an American Presbyterian leader who for more than five decades has been an active participant in the historic and revolutionary efforts to improve relations between Christians and Jews.

He is a beloved and superb pastor, who along with his late wife, the Rev. Linda B. Harter, served Presbyterian congregations in Margaretville and Kingston, N.Y., beginning in 1967, before becoming co-pastors in 1977 at the Church of Falling Spring in Chambersburg.

In 1976 Bill took his passionate commitment  to social justice into the rough-and-tumble political world and ran, unsuccessfully, for a seat in Congress representing a district north of New York City.

Bill Harter has been indefatigable in the continuing struggle to eradicate the religious anti-Semitism and political anti-Zionism he often finds embedded within his own denomination. Today he remains what he has always been for 50 years: one of America’s most vigorous and effective Christian public advocates in behalf of Israel’s security and survival.

Harter’s Ph.D. thesis at UTS focused on the ancient battle of Masada (73-74 A.D.) that took place in the bleak Judean wilderness three years after the Roman destruction of Judaism’s Second Holy Temple in Jerusalem. Masada was a bitter one-sided clash between a small band of defiant Jews and the vaunted Tenth Roman Legion, a brutal military occupation force in ancient Israel.

In addition to his work as a gifted congregational pastor, Harter has made 50 trips to the Middle East. On many of those journeys he led Christian study missions and shared his extraordinary love for the State of Israel and its people.

During his long career Bill has worked on a series of interreligious programs with the National Council of Churches, the World Council of Churches, the National Christian Leadership Conference for Israel, and most recently Presbyterians for Middle East Peace. The latter group has led the fight against attempts by the Presbyterian Church (USA)’s national body to participate in the anti-Israel BDS (Boycott, Divestment and Sanctions) campaign.

I frequently ask Bill if he ever becomes weary or discouraged, especially during his difficult campaigns to achieve justice, peace and positive interreligious relations. His answer: “Give God the glory for anything we can do; I’m so very thankful that God has given me the opportunities I have had — and continue to have!”

On Bill Harter’s 80th birthday, I’m reminded of the words of Psalm 90: “The days of our years are threescore years and ten, or even by reason of strength fourscore years.”