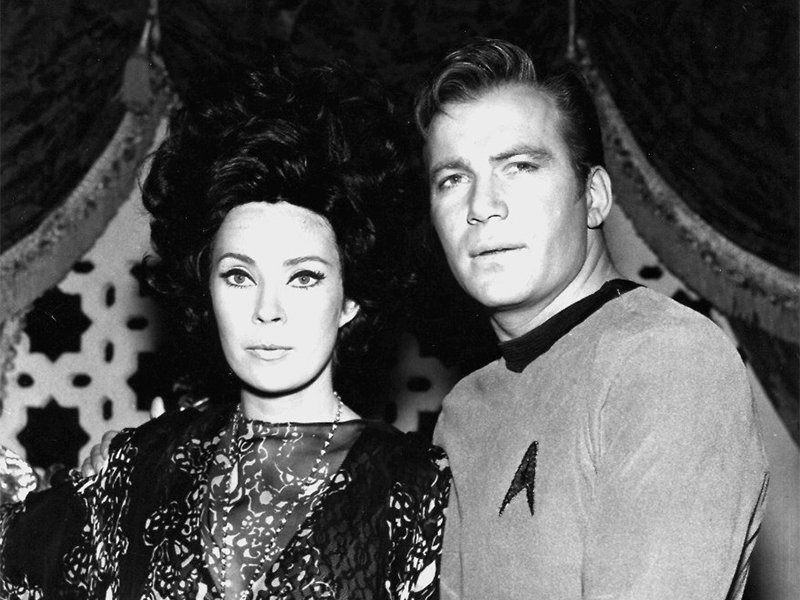 Sherry Jackson, left, as Andrea, and William Shatner as Captain Kirk from the Star Trek first season episode "What Are Little Girls Made Of?" in 1966. Photo courtesy of Wikimedia Commons
December 8, 2016
David P. Gushee

I am learning for the first time about what it means to be the primary leader of an organization in which many other people's livelihoods and even happiness are at least partly dependent on my decisions. It is chastening.

For almost every waking minute of my 25-year professional career I have served under the authority of someone else. Mainly that has been serving as a professor under a dean, provost, and president. Earlier it was as a youth minister under a pastor. Of course, in each case the pastor or president was responsible to a board or trustees. But my role was far below those august heights.

But now I am the pastor of a substantial church in Decatur, Georgia. And even though I am interim, I am still in the "captain's chair" for at least a while in leading this congregation. I set the preaching program, relate to all the committees, and lead the staff.

I am learning, among other things, that being the leader of an organization creates a whole different set of responsibilities -- and opportunities. Of course, I knew this in theory, but now I know it in my bones.

For example, it was easy for me to play the prophet when I was "just" a professor, especially once protected by tenure. I could say whatever I wanted without having to bear the full weight of the consequences. If there were complaints, they were mainly directed to those above me. They were the ones who had to lose sleep at night over how to respond to unhappy customers (parents, donors, alumni) and how, if at all, to try to rein me in. I could feel proud of my own courage (always a dangerous thing) and listen with frustration at those in authority as they occasionally felt the need to speak with me about the challenges my work was bringing to their institutions.

Now, amusingly, I am the one who has to talk to headstrong young prophets and suggest why it might have been better to say it this way rather than that way, to avoid antagonizing people unnecessarily, to be aware that their way of looking at something is not the only way to see it. If any of my former supervisors see this post I can imagine them saying to themselves: "At last, for old Gushee, the shoe is on the other foot. I wonder how he likes it?"

Christians like to say, based on Hebrew Bible precedent, that the three main leadership roles are prophet, priest, and king. The king leads the state, the priest leads the temple, the prophet challenges both with reminders of God's will, God's law. Or more broadly, the king carries the executive function, the priest cares for souls in crisis and transition, and the prophet articulates the core values that are supposed to govern the community.

It seems to me that both political and religious leaders carry all three responsibilities. Notice for example how President Obama has not only proposed and declared policy and directed the executive branch, but has so often played a priestly role in moments of national grief, and occasionally played a kind of prophetic role in reminding the nation of core American values as he sees them -- though in the latter role he has been deeply constrained by his responsibility to try to provide leadership to the whole national community, not just to his partisans.

The senior pastor of a church, at least, does the same kind of thing -- propose and declare policy and set direction, offer priestly care, and remind the church community of its core values in a way that serves the whole community as far as possible.

(It is precisely because of the limited truth-speaking possible to the head of the organization that more radical voices emerge, usually from the margins of the community, to speak a bolder truth as they see it. Thus for every King David there needs to be a Prophet Nathan, for every LBJ a Martin Luther King, and for every Barack Obama a Cornel West.)

I have been reminded that Baptist churches were among the first truly democratic institutions in the western world. The subtle combination of strong executive leadership under the "rule of law" provided by constitution, bylaws and various committee structures is a wonder to behold. But, as in the democratic state, it is fragile. It is protected by the will of the people, and by leaders who, generation after generation, are committed to the culture that sustains a truly democratic polity. The danger on the one side is always tyranny, while on the other extreme lies anarchy.

When I vacate the "captain's chair" and return solely to the classroom and the computer, I will do so having learned valuable lessons about organizational leadership and the challenges facing those who bear responsibility for the entire system rather than just one little part of it.

Maybe I will offer fewer headaches to my dean.

Related Posts
By Adelle M. Banks
John Lewis, preaching politician and civil rights activist, dies at 80
By Joseph D'Souza
India can take lessons from US in our struggle to end casteism
By Tony Jones
My last conversation with Darrin Patrick
By Thomas Reese
Democrats ignore Catholic voters at their own peril
By Elana Schor, Jack Jenkins
In South Carolina, secular activists rival political might of black church