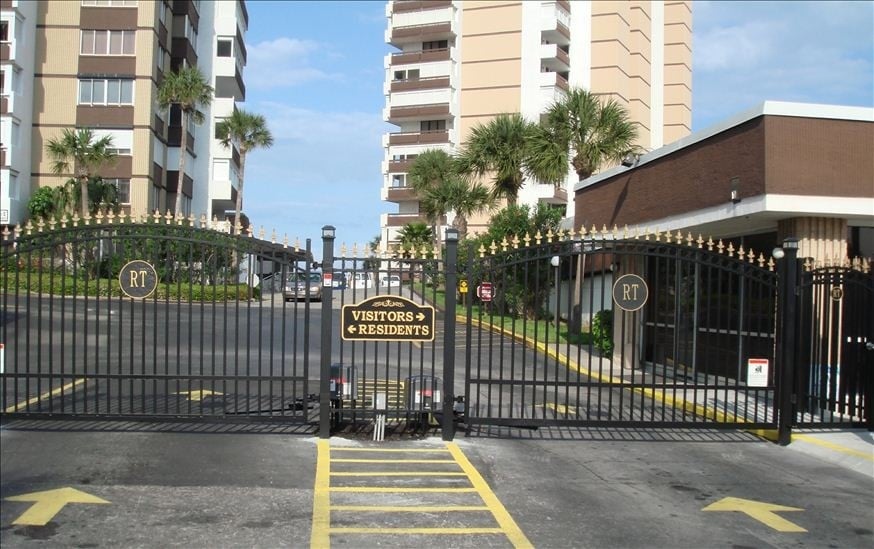 Are you thinking about re-locating to Florida?

Or, you can live in a gated community (and, of course, not just in Florida).

I have nothing against gated communities. There will probably come a time when I will live in one.

I even understand the ritual that happens at the gatehouse -- reaching into my pants pocket, which is not easy to do when in a car, pulling out my wallet, and pulling out my drivers’ license as a identification.

I get it. It’s called security. And because we live in insecure times, we need all the security we can get.

What does Judaism say about gated communities?

In the ancient Near East, almost every city was a walled city. Within those city walls, there were many sub-communites. And within those sub-communities, families would live around a common courtyard.

Here are the rules about walled communities. (Talmud, Baba Batra 7b)

You live within a walled community. You and your neighbors decide that you want to make some improvements within that community.

Question: How long does someone have to live in a community before the community can tax that person in order to make an improvement in the property?

Answer: A resident has to live in the community for a full year before he or she is subject to taxes for improvements.

But, if someone buys a house in that community, that person has to contribute to the costs for the improvement.

In other words, there is a difference between a renter and an owner.

So, now: what would constitute an improvement to the walled community?

A swimming pool. A tennis court. A place to play mah jong.

Or, how about a gatehouse?

I learned this from Rabbi Donniel Hartman, president of the Shalom Hartman Institute in Jerusalem, who will be speaking at Temple Solel, 5100 Sheridan Street, Hollywood, Florida, on Thursday evening, February 23.

He will be talking about his new book, Putting God Second: How To Save Religion From Itself.

The Talmud say that there was a sage who lived in such a walled city. Apparently, the prophet Elijah used to visit this sage.

Elijah, of course, was no longer alive. He had died – or, sort of died – fifteen hundred years before that.

When Elijah shows up, it means that godliness is present in that moment and in that place.

The Talmud tells us – that this sage, whom Elijah used to visit, built a gatehouse.

This is what RASHI, the great medieval commentator, says about the gatehouse:

It cuts off from view those calling out [the needy, out in the street, calling for tzedakah], and their voices are not heard.

Yes, security is a reasonable concern.

But, while those are reasonable concerns – we cannot let those concerns interfere with our responsibility to see and respond to those in need.

While the gatehouse provides safety, it also creates solitude.

We are not really talking about real estate here.

We are talking about what it means to live, as Jews, in the world.

The courtyard is a metaphor for the spaces (physical and spiritual) in which we live our lives.

The gatehouse is a metaphor for the things we build to protect us from the outside world.

Over the last few weeks, that has been the test – for all of us, for the Jewish community, for all people of conscience.

We can build gatehouses, and some of us have done a very good job of doing so.

Yes, we must protect ourselves, but protection does not mean blindness and deafness to what happens outside our walls.

We have to be able to see and to hear the voices of the poor, the refugees, the disenfranchised – of all those who live outside our gated communities of the soul.

For let us remember the lesson from the Talmud.

There was that sage who used to hang out with the prophet, Elijah. Something godly, otherworldly – what we might call spiritual – would visit him.

Until he built a gatehouse. The poor could no longer enter his community. And precisely at the moment that he did that, Elijah failed to show up for lunch.

To bring Elijah into our lives is to bring God into the world.

And if we want to bring God into the world -- then the poor, the refugee, the disenfranchised -- they must be allowed to enter our courtyards of the soul.