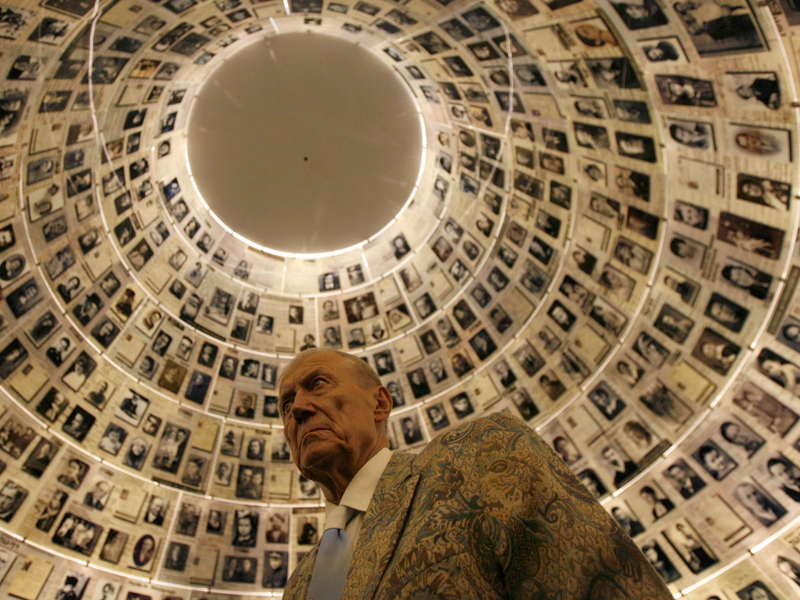 (RNS) Once upon a time, poets were rock stars.

Few rock star-poets were as compelling as Yevgeni Yevtushenko. The Russian poet, whose defiant verse inspired young Russians to resist Stalinism, died on Saturday (April 1) at the age of 83.

Yevtushenko deserves to be remembered -- for just one poem.

It was right before Yom Kippur.

The Nazis deliberately chose to schedule aktionen (murderous actions) during sacred seasons of the Jewish year.

That is why, for example, they launched the final attack on the Warsaw Ghetto to coincide with Passover, 1943.

They wanted to utterly and eternally sully the sanctity of those times.

Over the course of those two days, German soldiers massacred 33,771 Jews. It was the largest massive shooting during the Holocaust — the prime example of what has been called “the Holocaust by bullets.”

Over the next few months, in that place, thousands more Jews, Roma (Gypsies), Communists, and Soviet prisoners of war, were also murdered -- as many as 100,000 people.

And yet, the very Jewish aspect of that horror was deliberately erased.

Even the fact that September 29-30 And why did they do this?

Because they wanted to totally and eternally sully the sanctity of those holy days.

Why did the Kremlin resist establishing a memorial to Jewish victims?

Because, Soviet authorities said, the Nazis had shot other people there, too -- not only Jews.

Sound familiar? This was why the Trump administration deliberately, and repeatedly, refused to mention the specific nature of Jewish suffering on Holocaust Remembrance Day.

For Yevtushenko, that sin of omission was too much to bear.

No monument stands over Babi Yar.

Today, I am as old

As the entire Jewish race itself.

I see myself an ancient Israelite.

I wander o’er the roads of ancient Egypt

And here, upon the cross, I perish, tortured

And even now, I bear the marks of nails.

It seems to me that Dreyfus is myself.

The Philistines betrayed me – and now judge.

I’m in a cage. Surrounded and trapped,

I’m persecuted, spat on, slandered, and

The dainty dollies in their Brussels frills

Squeal, as they stab umbrellas at my face.

I see myself a boy in Belostok

Blood spills, and runs upon the floors,

The chiefs of bar and pub rage unimpeded

And reek of vodka and of onion, half and half.

I’m thrown back by a boot, I have no strength left,

In vain I beg the rabble of pogrom,

To jeers of “Kill the Jews, and save our Russia!”

My mother’s being beaten by a clerk.

O, Russia of my heart, I know that you

Are international, by inner nature.

But often those whose hands are steeped in filth

Abused your purest name, in name of hatred.

I know the kindness of my native land.

How vile, that without the slightest quiver

The antisemites have proclaimed themselves

The “Union of the Russian People!”

It seems to me that I am Anna Frank,

Transparent, as the thinnest branch in April,

And I’m in love, and have no need of phrases,

But only that we gaze into each other’s eyes.

How little one can see, or even sense!

Leaves are forbidden, so is sky,

But much is still allowed – very gently

In darkened rooms each other to embrace.

“No, fear not – those are sounds

Of spring itself. She’s coming soon.

“They break the door!”

“No, river ice is breaking…”

The trees look sternly, as if passing judgement.

Here, silently, all screams, and, hat in hand,

I feel my hair changing shade to gray.

As I am every child murdered here.

No fiber of my body will forget this.

May “Internationale” thunder and ring

When, for all time, is buried and forgotten

The last of antisemites on this earth.

There is no Jewish blood that’s blood of mine,

But, hated with a passion that’s corrosive

And that is why I call myself a Russian!

Yevtushenko was not allowed to give a public reading of the poem in Ukraine until the 1980s.

Yevtushenko is a proud Russian. But he knows Russian history. The Jew-hatred of the Czarist era never disappeared. Communism simply gave it a new form.

That was why Yevtushenko chose to imagine himself as a Jew: as an "ancient Israelite" in Egypt; as the biblical Samson; as Jesus on the cross; as Dreyfus; as a child victim of a pogrom (in Belostock/Bialystok) -- finally, as "Anna" Frank.

In the words of the Passover Haggadah: "In every generation, a person must see himself or herself as if he or she had gone out of Egypt."

Note: it does not say "every Jew." It says, in Hebrew, adam -- any descendant of Adam and Eve.

Yevtushenko taught us that moral imagination begins at the moment that we imagine ourselves as the Other.