WASHINGTON (RNS) When President Trump took office, scientists were chief among those who panicked.

After all, as a presidential candidate, Trump had referred to climate change as a hoax and had spoken suspiciously of vaccines, all while courting evangelical Christian voters, many of whom believe in creationism over evolution.

Now that the president has appointed cabinet members openly hostile to science, scientists all over the world say they have no choice but to take action.

And Earth Day (April 22), launched almost 50 years ago, marked the beginning of what supporters of science say is a new kind of activism among a group of people who have traditionally kept out of the political spotlight.

Thousands of people all over the world participated in what was dubbed the March for Science.

Organizers said the march — not just from the Washington Monument to the U.S. Capitol in Washington, D.C., but in more than 600 cities  — was a call “for science that upholds the common good and for political leaders and policy makers to enact evidence-based policies in the public interest.” Partners included the National Science Teachers Association, Advancing Chicanos/Hispanics & Native Americans in Science and the Union of Concerned Scientists. Bill Nye leads demonstrators on a march to the U.S. Capitol during the March for Science in Washington, D.C., on April 22, 2017. Photo courtesy Reuters/Aaron P. Bernstein

Among the most high-profile performers and speakers in Washington were Questlove and Bill Nye, better known as Bill Nye the Science Guy, a popular science educator.

“We are marching today to remind people everywhere, our lawmakers especially, of the significance of science for our health and prosperity,” Nye said, as a crowd of thousands waved signs and cheered in front of the Washington Monument.

“Our lawmakers must know and accept that science serves every one of us.”

Although organizers described science as a nonpartisan issue — noting that one of the goals for the march was to affirm that “science is a democratic value” — many that gathered for the event made clear they were no fans of the current presidential administration.

Some in the crowd cited, for example, the White House’s recently revealed plan to slash the Environmental Protection Agency’s budget by 31 percent and to cut more than 20 percent of the agency’s current workforce.

Dressed in purple and yellow superhero costumes, brother-and-sister team Eli and Gwenden Dueker traveled to the march to stand up for the EPA.

Eli Dueker, a 46 year-old professor of environmental microbiology at Bard College in upstate New York, said he thought it was time for scientists to acknowledge that like other politically active citizens, they too have concerns and priorities.

As a transgender person, he said, he also wanted to highlight the fact that scientists are a diverse group that include women, religious people and people of color. 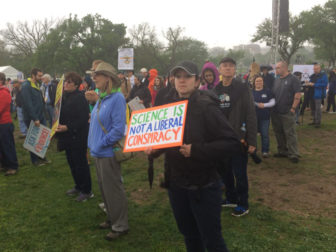 Rachel Anderson, 32, who has a Ph.D. in neuroscience and is an alcohol researcher at the Medical University of South Carolina in Charleston, said she decided to attend the March for Science April 22, 2017, in Washington, D.C., because she was worried about proposed cuts to National Institutes of Health funding. RNS photo by Lilly Fowler

Rachel Anderson, 32, who has a Ph.D. in neuroscience and is an alcohol researcher at the Medical University of South Carolina in Charleston, said she decided to attend that march because she was worried about proposed cuts to National Institutes of Health funding.

“I think there’s just a lack of respect for science. It’s being brushed off as a liberal agenda and science helps all people,” Anderson said.

Asked whether she believed the Trump administration had more respect for religion than science, the researcher said she didn’t think that was the main problem.

“I think a lot of politicians pretend to be more religious than they are as a way to rally support for themselves” she said.

Some, however, did cite concerns about religion playing too much of a role in the administration. Dressed in a light blue lab coat and dark blue bowtie, Sean Ravel, 16, who attends Reservoir High School in Fulton, Md., was among the many children and teens who attended the march. Ravel said he worried about Vice President Mike Pence’s conservative evangelical views, especially his belief in creationism, but said that wasn’t the case for Trump.

“I think he’s mostly appealing to his base,” Ravel said of Trump and religion. At the same time, he said, “I absolutely believe he doesn’t care about climate change and the well-being of the planet.”

“The president pandered toward conservative Christians but does not have those beliefs personally,” Armstrong said. Armstrong said she was concerned about the Trump administration’s impact on wildlife and national forests. Marchers gather on the grounds of the Washington Monument for the March for Science April 22, 2017, in Washington, D.C. RNS photo by Lilly Fowler

Despite a steady stream of rain throughout the day, marchers remained enthusiastic. Some ducked into coffee shops to try to dry off.

Casper Uhl, 43, a contractor for the Federal Communications Commission, took a break inside a Starbucks before going back outside and joining the march. He said ever since the election, he had made it a point to become more politically active.

As Uhl headed back outside, he grabbed a sign with an image of a polar bear and ice melting that read, “Let’s now paws for a moment of science.”