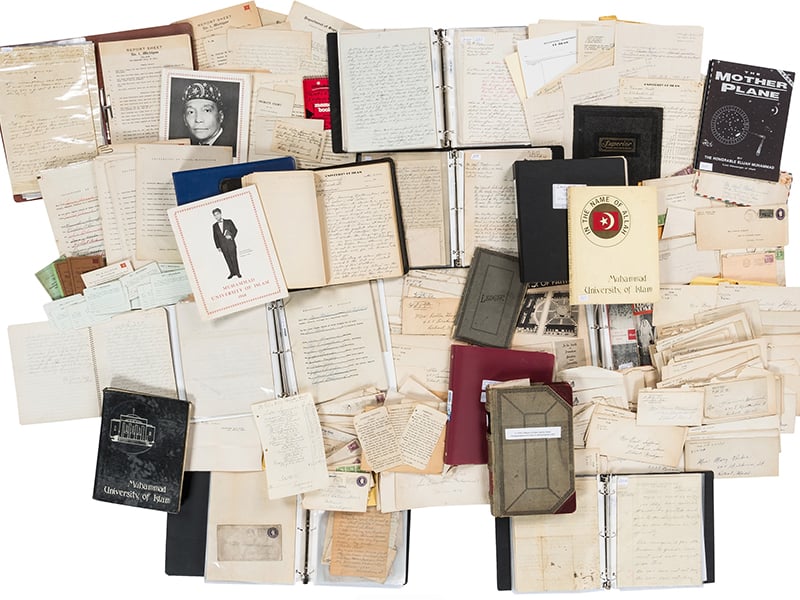 Some of the Nation of Islam documents being auctioned. Photo courtesy of Heritage Auctions, HA.com
May 15, 2017
Lauren Markoe

(RNS) A diamond-encrusted gold ring worn by Nation of Islam leader Elijah Muhammad sold for $5,250. His signature kofia, or hat, went for $32,500.

But documents from the early years of the religious group, assigned a minimum bid of $250,000, were pulled from an auction last week after their ownership was challenged, the Dallas auction house overseeing the sale said Monday (May 15).

The family of Burnsteen Sharrieff Muhammad, who served as secretary for Nation of Islam co-founder W.D. Fard, had guaranteed ownership of the ring, kofia and documents — 29 boxes of sermon notes and lesson plans from the first four decades of the religious group.

On the right, Nation of Islam leader Elijah Muhammad wearing a kofia in a 1965 FBI monograph. A kofia that is similar in style was recently auctioned. Muhammad image courtesy of Creative Commons. Kofia image, left, courtesy of Heritage Auctions, HA.com

Heritage Auctions said in a statement that it received notice of a challenge to the title of the document collection, so "the consignment was withdrawn ... pending a satisfactory resolution.”

Such challenges are "rather uncommon," said Eric Bradley, head of public relations for Heritage Auctions.

The Nation of Islam did not immediately respond to inquiries about the auction from RNS.

"We were very pleased to see both Mr. Muhammad's ring and kofia perform so well at auction. It speaks to his enduring legacy and his impact in the Muslim American community," Bradley said.

The Nation of Islam today is far smaller than the mid-20th-century organization that attracted thousands of African-Americans with its message of self-sufficiency and piety, its mistrust of the white establishment and its call for black separatism.

Then the dominant stream of Islam in America, it no longer is. Today, most mainstream adherents of Islam in the U.S. and abroad consider many of the Nation of Islam’s beliefs heretical.

The Nation of Islam’s two most famous converts, boxer Muhammad Ali and civil rights leader Malcolm X, both eventually broke with the organization.

Its prominence grew somewhat in the mid-1990s, especially after its sponsorship of the Million Man March in Washington, D.C., in 1995. The Nation’s leader, Louis Farrakhan, 84, is considered controversial for his anti-Semitic and homophobic sermons, his claims to have visited outer space, and false assertions that vaccines cause autism and that 9/11 “was an inside job.”