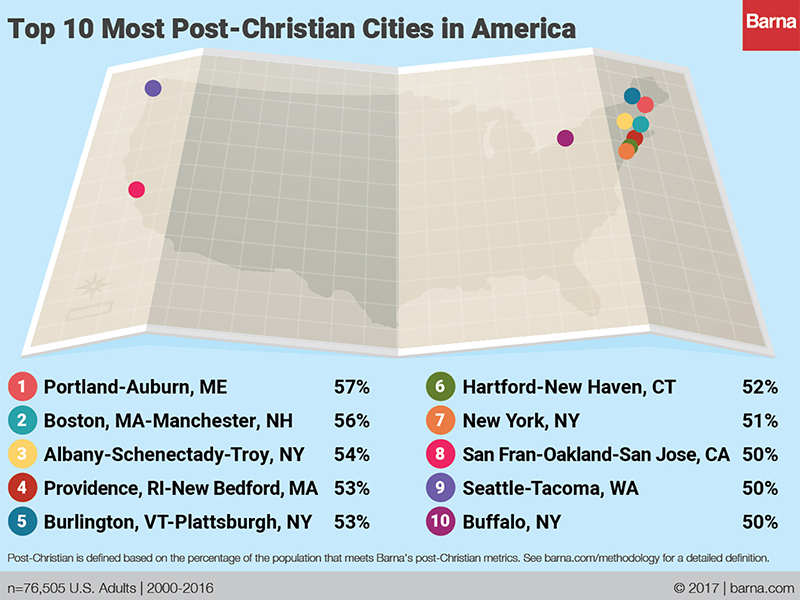 (RNS) — Residents of Portland and Auburn, Maine, aren’t just living in the far Northeast. They’re in the most “post-Christian” part of the country.

So says Barna Group, a California-based firm that conducts research for businesses and Christian institutions. Researchers opted for a different way of measuring the state of belief than asking people to say if they are “Christian." Those meeting nine or more of 16 criteria were labeled “post-Christian,” or secular.

“These factors include whether individuals identify as atheist, have never made a commitment to Jesus, have not attended church in the last year or have not read the Bible in the last week,” Barna said about the study.

Barna President David Kinnaman called the research a “more holistic look at the level of secularization of a particular market or city.”

In all the top secular-leaning cities, half or more of the respondents met Barna’s secular criteria.

Rounding out the top 10 were two West Coast centers — the California cities of San Francisco, Oakland and San Jose (50 percent), and the Seattle-Tacoma area of Washington state (50 percent) —and Buffalo, N.Y. (50 percent).

Shreveport, La., was the least "post-Christian" city, at 12 percent.

Barna also recently reported the cities that are the most “churched,” “unchurched” and “dechurched” — a term it used to describe people who were “formerly either very, somewhat or minimally active churchgoers” but have not attended a church service (except a special event like a wedding or a funeral) in the past six months.

Chattanooga, Tenn., was the most churched city, at 59 percent. The California region including San Francisco, Oakland and San Jose was the most unchurched, at 60 percent, and the most dechurched, at 47 percent.

Both sets of findings were based on nationwide telephone and online interviews of 76,505 adults conducted over seven years ending in April 2016. The maximum margin of error was plus or minus 0.4 percentage points.