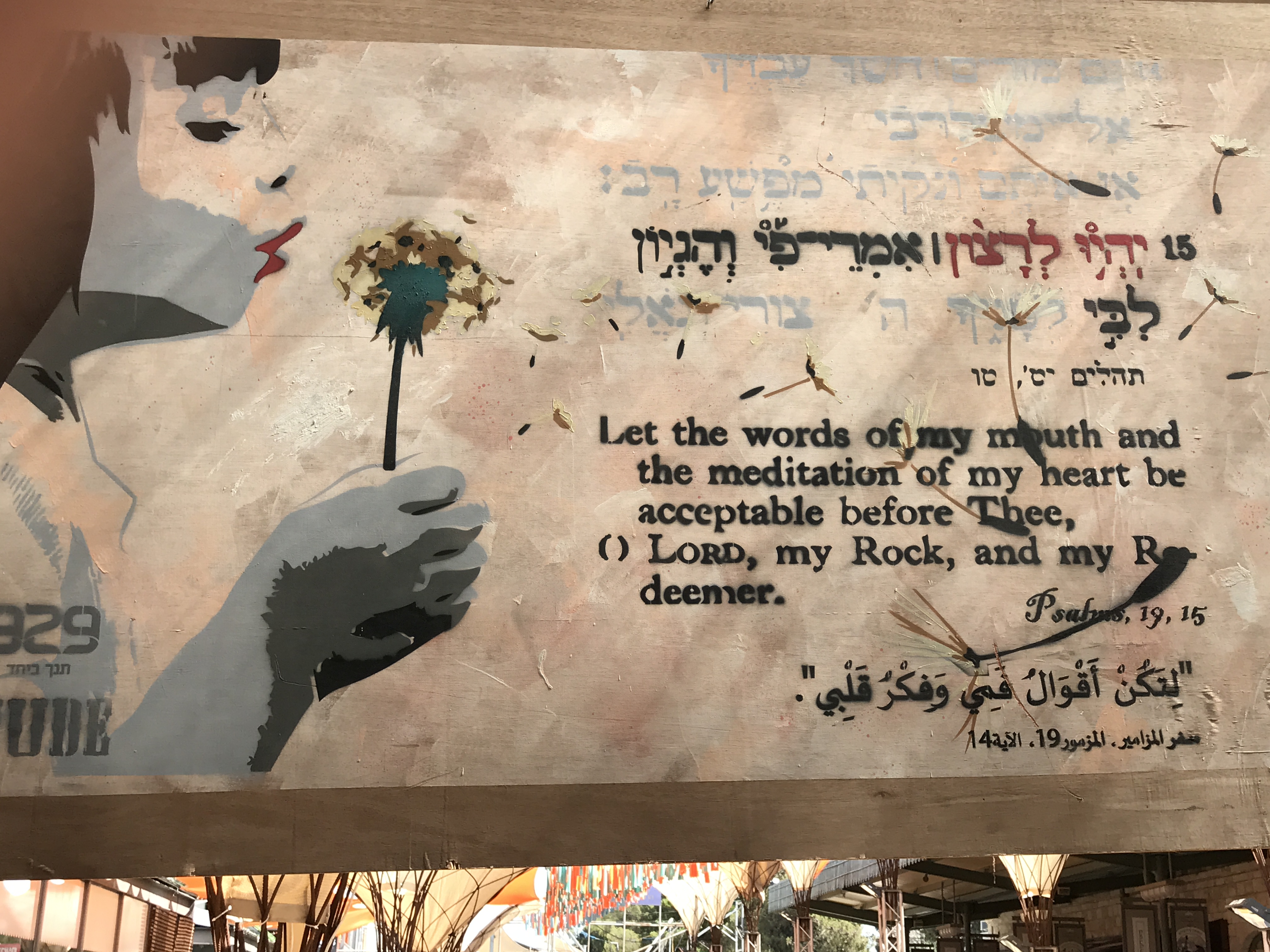 A poster hanging at the old train station in Jerusalem, which has been renovated for public celebrations. Note the Hebrew and Arabic texts.
July 17, 2017
Jeffrey Salkin

It has been a difficult week in Israel.

The bleeding has come from both internal and external wounds.

First, the internal -- the flap over the Kotel; the conversion crisis, and the Chief Rabbinate rejecting letters that were written by numerous rabbis, both non-Orthodox and Orthodox, attesting to the Jewish status of conversion candidates.

And then, the external wound -- the terror attack on the Temple Mount, that claimed the lives of two Druze policemen.

But, even in the face of all these events, it is too easy to ignore the greatness that is emanating from Israel -- greatness that is far more powerful than the religious Lilliputianism of the hareidim, far more typical than terror, and even far more persuasive than the fabled "start up nation" mythos of the Jewish state.

Let me introduce you to the true spiritual geography of the Jewish world.

I have been spending time in what author Yossi Klein Halevi and I have dubbed Jerusalem's "Jewish pluralism square kilometer" -- a roughly hexagonally shaped piece of the southern part of the city.

If you seek the places that embody soulful modern worship, social justice, and intellectual vigor, that area of Jerusalem is Ground Zero.

It is the most creative area in the Jewish world.

Because here is what you might not have noticed. With all the heat that has emanated from certain sectors of Israeli Orthodoxy, there has been an equal, and no less vigorous, response.

It is the response on the part of so-called "secular" Jews...

Here is what "secular" Jews are saying to the hareidim: "You don't own these texts and ideas. They are the patrimony of the entire Jewish people. They belong to us, as well.

And we intend to give them light, and heat, and spirit, and power, and depth.

This, frankly, is why I love Israel, and why I am a Zionist. I guess I believe in the Zionist vision of Ahad Ha'Am, who believed that Israel should become a cultural powerhouse fo the entire Jewish world.

If we were paying attention, we would notice that this has, in fact, come to fruition.

This truth is so powerful that it eclipses so much of the darkness that seems to emanate from the Jewish state.

My friends ask me: "Aren't you frustrated by the cynical power politics of the ultra-Orthodox?"

My response is simply this: "Yes. But, I love the Jewish state far more than I dislike their machinations. Their mischief is not powerful enough to put a damper on my ardor for the Zionist vision."

So, too, they ask me: "How can you continue to support Israel with its right-wing government?"

My response is simply this: "The same way I still love the United States of America -- even with its right-wing government."

Yes, there is much cause for frustration over what is happening in Israel -- both internally, and with its relationships with the larger Jewish people, and in with aspects of its foreign policy.

But, I find myself reflecting on the Hasidic story -- of the man whose son constantly disappoints him and hurts him.

He goes to his rabbi for advice: "What should I do?"

The rabbi counsels him: "Love him even more."

That is my response to what is happening in Israel.

I will simply have to love her even more.