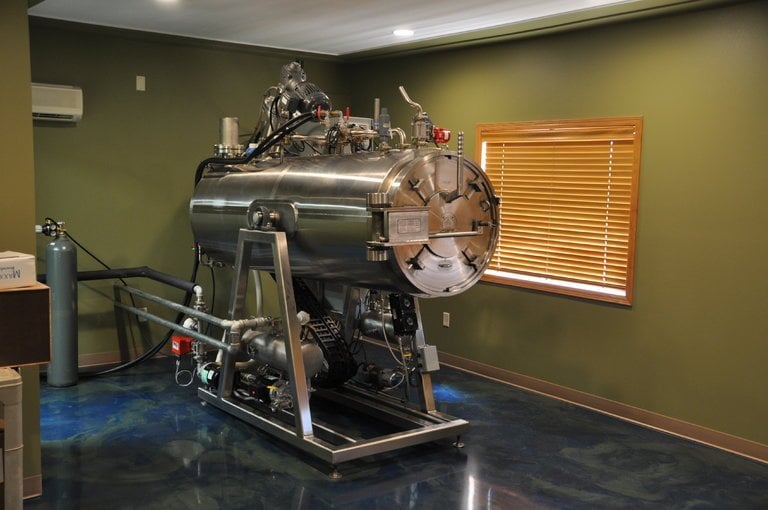 Years ago, the late Canadian author, Robertson Davies, wrote these words in an essay,"Haunted by Halloween":

Our forebears are deserving of tribute for one indisputable reason, if for no other; without them we should not be here. Let us recognize that we are not the ultimate triumph but rather we are beads on a string. Let us behave with decency to the beads that were strung before us, and hope modestly that the beads that come after us will not hold us of no account merely because we are dead...triviality about the past leads certainly toward a trivial future.

Bear these words in mind, as I tell you about a new, ghoulish (the day after Halloween linkage) way of disposing of the dead.

Not burial, and not cremation.

No. It is a liquefaction process called by a variety of names — flameless cremation, green cremation or the “Fire to Water” method, and chemically known as alkaline hydrolysis.

Here is how it works (and, if you have just eaten, forgive me).

A machine uses a chemical bath to dissolve protein, blood, and fat.

After that happens, what's left (in addition to the soul)?

Now – imagine that for your mother.

Alkaline hydrolysis is not new. It was first patented in the United States in 1888 “for the treatment of bones and animal waste.” The process was modernized in the 1990s, when it was used to dispose of human cadavers and dead pets.

The process has become all the rage among younger funeral directors.

Why is alkaline hydolysis gaining in popularity?

Then, there are other benefits of liquefaction. The resulting fluid contains nutrients. It can be used, and is already being used, as a fertilizer.

Rick Vonderwell, who manages Tails Remembered, a pet crematory in Delphos, Ohio, uses it at his farm, as do several large universities.

Where do I stand on this somewhat new and increasingly popular practice?

It violates every Jewish principle regarding how we treat the dead.

In Judaism, the body is sacred. It does not lose its sanctify when it is dead. To treat a body this way is nothing less than nivul ha-met, a violation and desecration of the dead.

I feel the same way about cremation. When anyone asks my advice on this matter, I counsel against it.

We are living only 75 years after history’s greatest single greatest assault on the Jewish body – the Shoah.

Anyone who has stood at the ovens in Auschwitz, as I have done, will probably resonate with this deep, visceral feeling.

(Or, perhaps not. I have heard of Holocaust survivors who have explicitly requested that they be cremated – as an act of solidarity with their loved ones who perished in the camps.)

At least, with ashes, there is the possibility – and probability – that loving survivors will place the ashes in an urn – burying them, or perhaps keeping the ashes in a place of honor. (Forgive me: as soon as I type these words, I think of this scene from "Meet the Parents").

But, with liquefaction, the remains go, well…..

I sympathize with the environmental concerns regarding burial. I wonder, like many people: where will all the dead go?

But, even though I am committed to environmentalism, I worry far more about the coarsening of a society in which the dead are treated as disposable commodities.

Yes, yes: people will say that “I carry the memory of my mother in my heart,” which I suppose is true.

But, Judaism has never believed in the absolute interiority of such feelings. There is something to be said about having a place to visit.

A story: years ago, I knew a family whose elderly mother had died, in her nineties.

I found out about the death weeks later. When I inquired about it, and asked about the funeral (I was their rabbi, and was puzzled that I never got a call), they hemmed and hawed.

Finally, the husband said: “You know, she was so old – we just decided to have her cremated. No service. Frankly, it just wasn't convenient for us."

“What happened to her ashes?” I asked.

“We just kind of….threw them away,” said the mother.

“In any place special, or meaningful?” I asked.

Nothing. No funeral. No burial. No prayers. Nothing.

But, her earthly remains went to nothing.

They were distraught. Their daughter, aged twenty, had joined a cult.

“Because she said that there’s nothing spiritual in our home, or in our lives,” the mother wept.

For decades, I have been haunted by this question:

Was there any link between this young woman’s search for spirituality – and the fact that she obviously witnessed that her grandmothere’s remains were treated with something approaching apathy – even callousness?

It matters how the dead are treated.

It might not matter to them, but it matters to us.

And, it matters to God.