In a recent RadioWest episode, Doug Fabrizio interviewed Jana Riess about the “Next Mormons Survey” that she and I designed and fielded in the fall of 2016. Jana noted that the results showed that less than half of Mormon Millennials watched General Conference in the last six months.

Age undoubtedly makes a difference, but what about gender, education, race/ethnicity, or other important demographic factors? Using the “Next Mormons Survey” we are able to dig deeper into patterns of viewership of LDS General Conference.

Using a statistical tool called a “multivariate regression analysis,” we can identify the unique effect of each of these factors on General Conference viewership among our survey respondents, controlling for each of the other factors. Here we analyzed age, gender, race, education, income, political partisanship, geography, and activity level in the Church.

This graph shows the likelihood of each demographic group reporting that they viewed General Conference in the last six months, statistically controlling for each other variable described above.*

Age: We continue to see a clear difference between older and younger active Mormons when it comes to General Conference viewership. Millennials and GenXers are about 48% and 51% likely to watch General Conference, respectively, compared to 63% for their older counterparts. Perhaps this is because there has never been a wider gap between the average age of Mormon General Authorities and rank-and-file members as there is right now. Younger Mormons may have a more difficult time relating to the speakers who are two to three times their age.

Some of the largest differences, though, are found in terms of church activity, geography, and education: 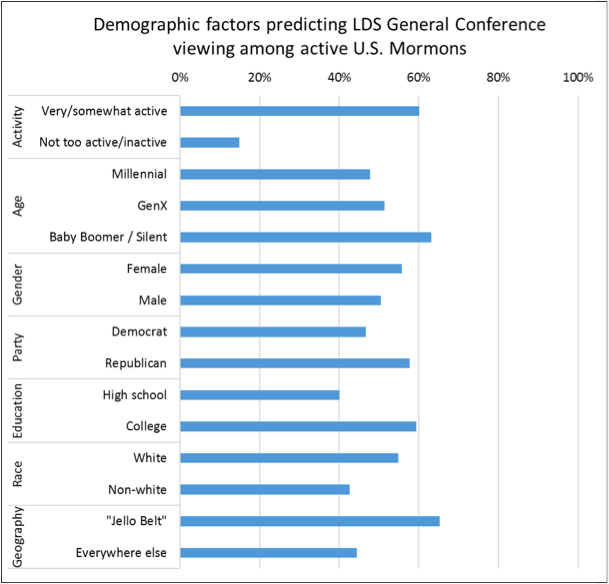 Benjamin Knoll is is the John Marshall Harlan Associate Professor of Politics at Centre College in Kentucky and the co-author of the forthcoming book “She Preached the Word”: A Fresh Perspective on Women’s Ordination in American Congregations (Oxford).

Note: In more technical terms, every other factor in the multivariate logistic regression model achieves levels of statistical significance at p<0.05, with gender being significant at p<0.10. The model was estimated using robust standard errors to account for the presence of heteroskedasticity in the estimation.

Other findings from the Next Mormons Survey:

Mormons, Trump and McMullin: A 2016 postmortem by the numbers