There have been lots of fights in the Catholic Church lately as reactionary cardinals, theologians and commentators have gone after Pope Francis and his emphasis on God’s compassion and mercy. These dissenters believe that he should stress the rules and divine judgment.

What is remarkable about these critics of Pope Francis is that many were papal loyalists during the papacies of John Paul and Benedict. During these papacies, they harshly criticized as dissidents and heretics anyone who questioned papal teaching. What is clear now is that their loyalty was not to the successor of Peter but to their own theological opinions.

No one epitomizes this transformation more than Capuchin Father Thomas Weinandy, who recently released his letter to the pope accusing him of confusing the faithful. Weinandy was executive director of the U.S. bishops’ Secretariat for Doctrine from 2005-2013 and used his office like a grand inquisitor to persecute those theologians who questioned papal teaching. True, he did not physically torture his victims, but he did everything he could to destroy their reputations and their careers.

To my knowledge, none of these theologians had the chutzpah to write a letter to the pope and then release it to the press. Rather, they wrote as academics on topics in the areas of their expertise. Most of them were highly respected in their fields.

Now the inquisitor is questioning the pope.

His letter begins by stating that “a chronic confusion seems to mark your pontificate.” Too often, the light of faith “is obscured by the ambiguity of your words and actions,” which “fosters within the faithful a growing unease.”

Weinandy and his friends may be confused, but the faithful at large love and support Pope Francis. A Pew Research Center survey released in January found that 87 percent of Catholics express a favorable view of Pope Francis. It should be noted that these Catholics also liked Popes John Paul and Benedict, but unlike the conservative dissidents, they did not abandon the papacy when Francis was elected.

The first problem Weinandy points to is Chapter 8 of “Amoris Laetitia,” which deals with the role of conscience and discernment in guiding divorced and remarried Catholics. He joins his voice to those of the four cardinals and some theologians who have criticized this chapter. He accuses the pope of being “intentionally ambiguous, thus inviting both a traditional interpretation of Catholic teaching on marriage and divorce as well as one that might imply a change in that teaching.”

He even asserts that this “seemingly intentional lack of clarity inevitably risks sinning against the Holy Spirit, the Spirit of truth.” He accuses the pope of “calumny” in calling his critics “Pharisaic stone-throwers who embody a merciless rigorism.” This coming from a man who did not worry about calumny when he was accusing some of America’s most prominent theologians of being unorthodox!

Weinandy ignores that fact that “Amoris Laetitia” was the product of wide consultation in the church, including two synods of bishops.

A second issue that Weinandy has with Pope Francis is that he “seems to demean the importance of Church doctrine.”

There is no question that Pope Francis gives a priority to how we live the faith rather than how we explain it, or as theologians would say, he gives more importance to orthopraxis than orthodoxy. As Matthew 25 explains, we will be judged by how we live the faith in feeding the hungry, giving drink to the thirsty and clothing the naked. We will not be judged by whether we can answer all our catechism questions.

What Weinandy and his inquisitional colleagues never understood is that it is the job of theologians not simply to quote Augustine and Aquinas, but to imitate them by using the best thinking of their day to explain the faith to their generation. One cannot use 13th-century theology to explain the faith to people in the 21st century. The suppression of theological creativity during the papacies of John Paul and Benedict hurt the church badly.

Weinandy’s third complaint is that the pope is scandalizing the believers by appointing bishops “who seem not merely open to those who hold views counter to Christian belief but who support and even defend them.” Again, Weinandy confuses the faith with his theology. He is shocked that a pope would appoint men who reflect his priorities for the church when this has been done by every pope. Under John Paul, loyalty was the most important criterion for episcopal appointments, trumping pastoral qualifications and good judgment. 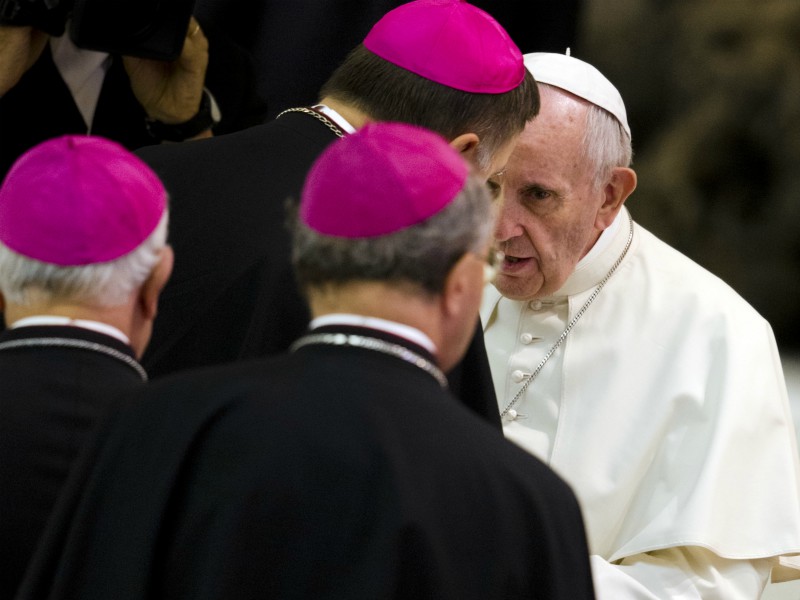 Pope Francis talks with bishops during an audience he held for participants at the 68th national Liturgical Week on Aug. 24, 2017, in the Pope Paul VI Hall at the Vatican. AP photo by Domenico Stinellis

Weinandy’s next complaint is that Pope Francis is fostering disunity in the church by encouraging “a form of ‘synodality’ that allows and promotes various doctrinal and moral options within the Church [and] can only lead to more theological and pastoral confusion.” Again, Weinandy believes that any views that are different from his theology are wrong. He even asserts that “Such synodality is unwise and, in practice, works against collegial unity among bishops.”

In reality, collegiality and synodality are trying to explain the same reality — the union of the pope with the college of bishops where there is shared responsibility for the church under the primacy of the pope. Sadly, collegiality under John Paul became defined as the obligation of the bishops to agree with him in all things. Synods became a joke, where bishops quoted the pope to himself and told him how great he was.

Pope Francis, on the other hand, encourages free discussion and debate, which he sees as the path to theological and pastoral development. Ironically, Weinandy complains about the pope allowing too much freedom of discussion and then takes advantage of this freedom to tell the pope that he is all wrong.

Finally, Weinandy accuses the pope of being vindictive. What “many have learned from your pontificate is not that you are open to criticism, but that you resent it.” He goes on, “Many fear that if they speak their mind, they will be marginalized or worse.”

Again, Weinandy appears to have forgotten the fear inspired in bishops and theologians by John Paul, who would allow no discussion on issues on which he had made up his mind. Weinandy has also conveniently forgotten his own role in this inquisition. So far, he can provide no evidence of similar actions against him and his colleagues by Pope Francis.

In brief, Weinandy fails to see that most of his criticisms of Pope Francis are exactly the same as the criticisms that progressive theologians had of Pope John Paul II. While Weinandy believes Francis has betrayed the legacy of John Paul and Benedict, progressive theologians accused John Paul of betraying the documents and spirit of the Second Vatican Council. Progressives too felt that John Paul’s episcopal appointments were disastrous. And they saw scores of their colleagues subjected to inquisitional procedures that Weinandy helped carry out for the bishops and the pope.

If a theologian like Sister Elizabeth Johnson of Fordham University had written a similar letter to Pope John Paul, the Vatican and the bishops would have come down on her like a ton of bricks.

Weinandy, on the other hand, got a slap on the wrist from the president of the National Conference of Catholic Bishops and lost his position as a consultant to the bishops’ Committee on Doctrine.

In his statement, Cardinal Daniel DiNardo noted that “Throughout the history of the Church, ministers, theologians and the laity all have debated and have held personal opinions on a variety of theological and pastoral issues.” But, he said, “every good Christian ought to be more eager to put a good interpretation on a neighbor’s statement than to condemn it.” And, “This presupposition should be afforded all the more to the teaching of Our Holy Father,” DiNardo said.

I don’t disagree with anything DiNardo said, I just wish dissenters had been treated similarly during the papacies of John Paul and Benedict.

Yesterday’s papal loyalists are today’s dissidents. Yesterday’s dissenters are today’s papal defenders. The true scandal in the church is not what one theologian or pope says, it is that we are not capable of dialoguing with each other. That is the fault of John Paul and Benedict, not Francis. They attempted to impose their theologies (their way of explaining the faith) on the church and silenced anyone who disagreed.

With the papacy of Francis, we are being invited to dialogue in a truly collegial fashion. Why does that scare people like Weinandy? Because they can no longer impose their views on the church. They are no longer in charge.