(RNS) — Next week, Pope Francis will make a visit to Myanmar, where he risks either compromising his moral authority or putting in danger the Christians of that country. I have great admiration for the pope and his abilities, but someone should have talked him out of making this trip.

I pray I am wrong.

Myanmar is a mess.

Under a veneer of democracy, the military still holds most of the power, including control of the police and other security forces. Allied with the military are radical Buddhist monks who have rallied their people against the Rohingya, a Muslim minority, which they consider hostile foreigners even though they have been in Myanmar for generations. The result has been what the United Nations calls a textbook case of ethnic cleansing and some people think borders on genocide.

The evidence is overwhelming. Satellite photos show scores of villages burned to the ground. Nearly 600,000 Rohingya have fled their country becoming refugees in Bangladesh. Journalists and human rights organizations have recorded hundreds of eyewitness stories of systematic rape, mass murder, and organized terror against the Rohingya by the Myanmar military. The refugees in overcrowded, disorganized camps are clearly traumatized by their experience.

This crisis did not just suddenly appear without notice. The U.S. Commission on International Religious Freedom has been documenting the abuse of the Rohingya for years and has listed Myanmar, which the U.S. State Department still calls Burma, as a “country of particular concern,” one of the worst countries in the world on religious freedom.

Although I have been a commissioner of USCIRF since appointed by President Obama in 2014, the views expressed in this column are my own and do not necessarily represent the views of the commission.

In its annual reports, USCIRF has been very critical of Myanmar. In December 2016, it also published a special report on “The Ongoing Persecution of Rohingya Muslims in Burma.” But it is not only the Muslims who have been persecuted by the Buddhist majority. Also documented by USCIRF is the hidden plight of the Christian minorities in Burma. 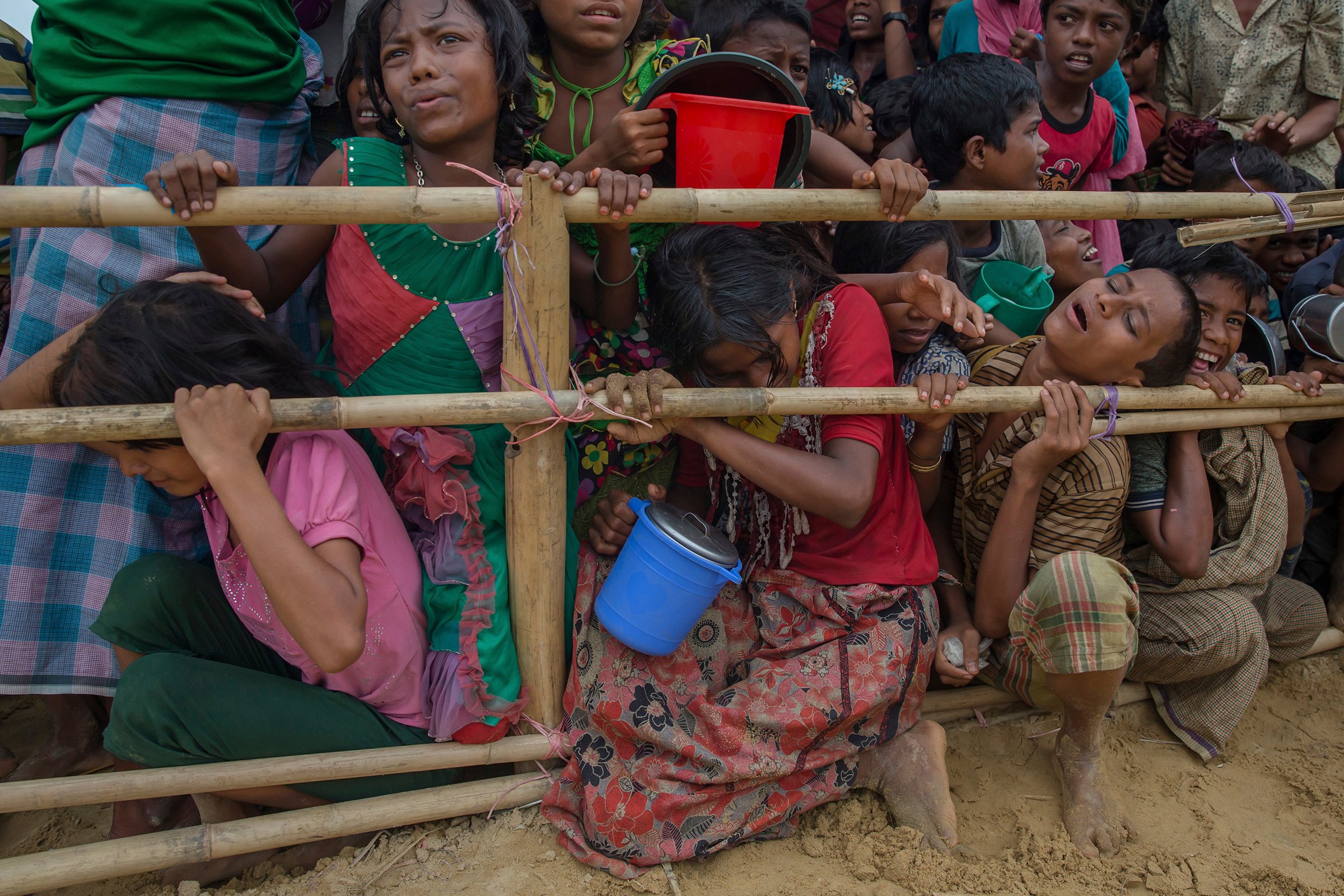 Rohingya Muslim children, who crossed over from Myanmar into Bangladesh, wait squashed together to receive food handouts distributed to children and women by a Turkish aid agency at Thaingkhali refugee camp, Bangladesh, Saturday, Oct. 21, 2017. UNICEF says the children who make up most of the nearly 600,000 Rohingya Muslims who have fled violence in Myanmar are seeing a “hell on earth” in overcrowded, muddy and squalid refugee camps in neighboring Bangladesh. Children account for 58 percent of the refugees who have poured into Cox’s Bazar, Bangladesh, over the last eight weeks. (AP Photo/Dar Yasin)

This is why the pope’s Myanmar visit, which begins on Monday (Nov. 27), is so dangerous for the 4 percent of the population that is Christian, including the 659,000 Catholics.

On the one hand, his prophetic voice should be on the side of the Rohingya refugees, but the Myanmar military and government deny any ethnic cleansing is happening. A strong defense of the Rohingya will lead to increased persecution of the Christians in Myanmar. Cardinal Charles Maung Bo, archbishop of Yangon, has warned the pope not to even use the word “Rohingya,” a term the Buddhist majority rejects.

In the last century, Pope Pius XII faced a similar dilemma. Would speaking out against genocide of the Jews during World War II put Catholics at risk? Pope Francis is walking through the same minefield in Myanmar. If he is prophetic, he puts Christians at risk; if he is silent about the persecution of the Rohingya, he loses moral credibility. While I hope he and the Myanmar Christians survive the experience, Pius XII’s credibility clearly did not.

This is not the first visit of Pope Francis to a troubled land. He visited the Middle East in 2014, and Cuba and the Central African Republic in 2015. Those trips were almost universally deemed successes. If he is equally successful in Myanmar, I will not be surprised to see him walk on water.

News
Pope Francis voices support of civil unions for LGBTQ couples in new documentary
News
Carlo Acutis, millennial candidate for sainthood, draws 41,000 to Assisi church
Signs of the Times
Dear Pope Francis, six reasons you should wear a mask
News
Clergy shortage grows to more than 3k Catholics for every priest, Vatican data shows
News
‘Cardinal’s lady’ arrested in Milan is latest to be accused in widening Vatican scandal
© Copyright 2020, Religion News Service. All rights reserved. Use of and/or registration on any portion of this site constitutes acceptance of our User Agreement and Privacy Policy, Privacy Statement and Cookie Notice. The material on this site may not be reproduced, distributed, transmitted, cached or otherwise used, except with the prior written permission of Religion News Service.