So here’s our question to kick off the season: What if Mary wasn’t a virgin?

That’s the question driving theologian Kyle Roberts’s new book A Complicated Pregnancy: Whether Mary Was a Virgin and Why It Matters.

What struck me most in reading it was that regardless of where you fall on the question of Mary’s virginity, the book makes a compelling case that something is gained and something is lost either way: If Mary was not a virgin, Christianity jettisons another piece of the miraculous, stranding us in a disenchanted post-Enlightenment world. If she was, it loses the opportunity to redeem sexuality and the body as elements of creation that God called “good.”

I found the book fascinating — not to mention timely, what with Roy Moore and the question of sexual consent for teenage girls. (We talk about that at the end of the interview.) — JKR

Roberts: The original inspiration was a blog discussion that I was involved in on Patheos, where each of four authors took a turn reflecting on the meaning of the Christmas story. I took on the question of the virgin birth, and that provoked a journey for me that ultimately led to the book. In the book, I actually take a different conclusion than I did in the post.

RNS: What changed about your conclusion?

Roberts: In the original post I take a traditional conclusion consistent with every confession and creed that’s been written since the first century of the church. But I realized when writing the book there is so much going on with that simple phrase “born of a virgin.” From our vantage point—with biology and history and our understanding of how legend and mythology work, the virginal conception makes much less sense today. But more surprisingly, the point of the incarnation, that God becomes a human being, conflicts with the traditional idea of a virginal conception.

RNS: You mentioned biology, and there’s an interesting chapter in the book about how virgin birth (asexual reproduction) does happen in nature, like with some sharks. Wow.

Roberts: The technical term is parthenogenesis, but you lose friends quickly if you throw that term around! It is an intriguing idea, and pretty stunning if you’ve never encountered it before, that asexual conception is not all that unusual in the natural world. Life has a way of reproducing in the face of great odds. In an asexual conception, the fertilization of an egg or a life happens apart from normal, typical, male-female sex. There’s a whole species of female-only lizards, for example, known as “lesbian lizards!”

The intriguing thought for me originally, when I set out to write the book from a more traditional perspective, was “Wow. This phenomenon of science actually lends support to the traditional virgin birth stories.” That’s a compelling idea on the face of it, but when you did deeper you realize that it never happens with mammals. Science doesn’t actually support asexual reproduction for humans.

But people don’t believe in the virgin birth because of science; it’s about a miracle, about God intervening in the processes of nature. So you go through these roundabouts and detours and wind your way around all of these issues. It all leads to the question: What counts as a miracle? What counts as God’s acting in the world? Does it have to be flashy and dazzling and supernatural for it to be God acting in the world?

RNS: You make a case that all the bodily fluids and blood that happen with any birth are a vital part of understanding the incarnation, and that the early church lost something when it sanitized the birth of Jesus.

Roberts: Not all theologians were averse to those things early on, like Tertullian, who argued that Jesus needed to be born in the midst of all of that. The human biology of the delivery had to be something that Jesus was not shielded from. A typical human birth or delivery suggests a positive view of humanity and nature—that our biology is not inherently dirty of flawed, or that God somehow needs to be protected from blood and sexuality and the fluids that are endemic to a human birth.

RNS: How is this going over with your students or the people at church? Are they threatened at all by the idea of Mary not being born of a virgin?

Roberts: It’s different depending on the context. In the progressive mainline Protestant seminary where I teach, the question of whether Mary was or was not a virgin is not one that consumes them. My class now is reading through the book with me, and I hope they’ll see that the question does matter in ways that they hadn’t perhaps articulated.

I take a more orthodox position on the resurrection, so it’s not like I’m saying that if we’re going to be modern Christians we have to discount every miracle, every claim. My hope is that by being positioned in this unique way, and taking the lens of the theology of the incarnation as central, it will capture people from different sides, and also raise critiques from both sides.

In my church context, which is much more traditional, when I talk about this it raises a lot more anxiety from some who aren’t ready to go down that road. But most of them are at least willing to hear out the position. And some are grateful to hear an alternative interpretation.

RNS: In the last couple of weeks, the issue of Mary and Joseph has been in the news in a bizarre way via one of the defenders of Roy Moore, who excused Moore’s alleged molestation of a teenage girl by saying that Joseph was much older than Mary, so there’s “nothing immoral or illegal” about Moore’s behavior.

Roberts: It was a very strange series of tweets and statements. For one thing, if you affirm a traditional view of the virgin birth, Joseph and Mary didn’t have sexual relations. And of course if you affirm the perpetual virginity of Mary, as many Catholics and Orthodox Christians do, they never have sex at all. So from that standpoint it’s odd to use the relationship of Joseph and Mary as an excuse for Roy Moore apparently preying on teenage girls.

Many scholars rightly point out the problem of a young, possibly very young, teenage girl in the story being compelled to use her body to carry the Son of God. As I ask in the book, could this young Jewish girl have said no to the angel—to God? Was there an actual rape of Mary by an older Joseph, or by a Roman soldier, as was rumored very early on? So the question of consent is a deeply important one, and it’s certainly not one that lends credence to the kind of the thing that Roy Moore was apparently doing. In fact, it should cause us to raise concerns in the opposite direction.

The Roy Moore situation is an example of how objectifying female sexuality—and idealizing sexual “purity”—under the cover of Christianity can harm women and girls.

News
Mary, mother of Jesus, returns as an icon for pop stars and social justice warriors 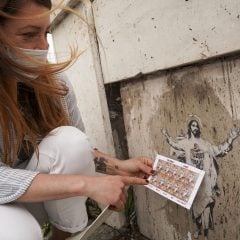 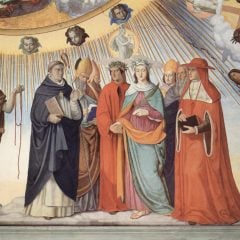 News
As COVID-19 surges, Catholics find new, socially distanced ways to honor Our Lady of Guadalupe
Follow us on Facebook!
Submit your photos to RNS