THETKABYIN, Myanmar (AP) — In her dreams, Setara walks hand in hand with her Muslim husband through the streets of the seaside Myanmar town they grew up in. They visit old friends, share a meal with family, dip their toes into the warm surf of the Bay of Bengal.

But in the hate-filled reality of the world they live in, Setara can only do these things alone — when she takes off her Islamic veil and crosses through a pair of checkpoints into the predominantly Buddhist state capital, where her government will not allow the love of her life to set foot.

That’s because Setara’s husband is an ethnic Rohingya Muslim, a group the United Nations has called one of the most persecuted on the planet. Setara, meanwhile, was born a Buddhist and part of the ethnic Rakhine, who despise the Rohingya and see them as foreign invaders from Bangladesh.

Marriage between the two communities is extraordinarily rare. It’s also risky in a nation where security forces have driven more than 730,000 Rohingya into exile since 2016, carried out large-scale massacres and burned hundreds of villages in a campaign the U.N. and human rights groups have described as “ethnic cleansing.”

In Sittwe, Setara tells no one she is married to a Rohingya. Because “if they knew, they would kill me right away. So I’m always careful.”

The 24-year-old’s fears are not exaggerated. Even Rohingya who have ventured into Sittwe on rare trips escorted by police in recent months have been attacked by mobs and killed. Hard-line Buddhists regularly march through the city’s crumbling streets, past ruined mosques that have been closed since June 2012, when the Rakhine burned most Rohingya homes and drove more than 120,000 into camps for the displaced.

Setara, then a widow, met her husband, Mohammad, about eight months later at a market on the edge of a Rohingya village where she had come to sell vegetables. Rakhine traders, who can travel freely, regularly sell goods to Rohingya at marked-up prices. 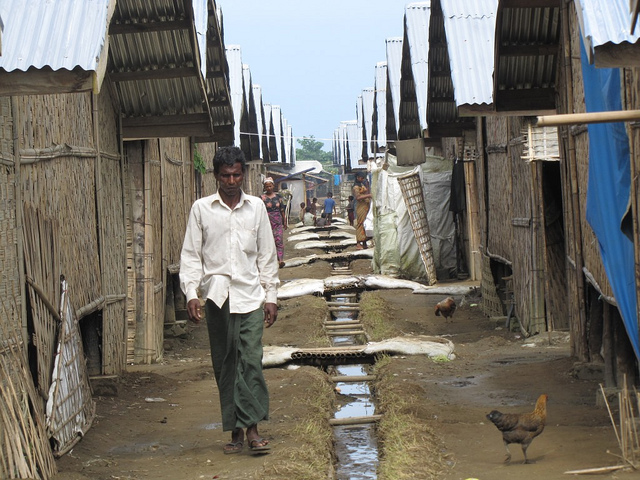 (Sept. 2013) Some 90,000 Rohingya now find themselves squeezed into camps near the state capital Sittwe, living in cramped barrack-type shelters.

They exchanged phone numbers and she began visiting him at a pharmacy he ran nearby. Mohammad, 32, bought her small gifts, teased her to make her laugh and took her for rides on his motorbike. He was amazed to meet a Rakhine woman who didn’t treat a Rohingya any differently than her own. He told her he loved her.

Setara felt the same way. She thought he was the kindest man she had ever known.
But when she told her family — after much reluctance — that she was dating a Rohingya man, they became enraged. Her brother beat her severely. They told her she could not go back. Then, her family kicked her out.

The move pushed her closer to Mohammad. In late 2013, she converted to Islam and they married in a small Islamic ceremony held before local religious leaders. No one from Setara’s family attended.

In the years since, Setara has reconciled with her three sisters. But she has never been able to return home. Her parents passed away when she was young, and the brother who helped raise them all still refuses to speak to her. Residents of her old neighborhood have also made clear she is no longer welcome; they call her a “Kalar’s wife.” Kalar is a derogatory word for Muslims that is frequently used in Myanmar.

Mohammad characterizes their relationship in much the same way his wife does. “She sees me as a human being and I see her as a human being, and it’s that simple,” he said, when asked how they had overcome the huge societal obstacles to marry.

Mohammad is a quiet man with a calm manner; Setara is more outspoken. They are a couple clearly in love, glancing at each other and smiling as they talk. The AP is identifying them by their first names only for their protection.

They live in a Rohingya village adjacent to a network of Muslim displaced camps, with Setara’s 2-year-old niece and her 9-year-old daughter from her first marriage. Setara says the Rohingya have welcomed her warmly, as one of their own. But she misses her old friends and her old life.

While Mohammad, like all Rohingya, is not permitted by the government to travel, Setara makes regular trips to Sittwe, about half an hour away, to buy supplies for the small pharmacy and shop they run beside their home.

Before going, though, she smears a pale cosmetic paste on her cheeks called “thanaka,” which is commonly used by Buddhists in Myanmar. She takes off her veil and puts on a blouse. And she never forgets to bring her national identification card, which includes a critical line indicating she is Buddhist. Without it, she could never cross the checkpoints — one manned by police, the other by soldiers — to town.

The contrast between the two worlds is startling. The Rohingya side is dry and dusty, devoid of trees and filled with despair, with little to do. The Buddhist side is lush, with schools and a university, paved roads, a karaoke bar and restaurants that serve wine by the sea.In Sittwe’s main market, Setara visits friends and sometimes her sisters.

But she also overhears Rakhine gossiping about the latest news, and cursing the Rohingya. Sometimes she goes to the beach, where teens hang out at seaside cafes on plastic chairs, and watches the sun go down. But when she thinks about her husband — the fact that he cannot be there — her thoughts turn dark, and she wonders “if our lives will just end like this.”

Rohingya Muslim men carry the body to a cemetery in Kutupalong refugee camp on Sunday, Nov. 26, 2017, in Bangladesh. Since late August, more than 620,000 Rohingya have fled Myanmar’s Rakhine state into neighboring Bangladesh, where they are living in squalid refugee camps. (AP Photo/Wong Maye-E)

“I always wish I could go out with my husband and go to the fun places in town … especially when I see other couples going around,” Setara said. “I just want to cry sometimes.

Mohammad imagines the same, impossible trips. But he also worries each time she goes. “I worry something might happen, that someone might find out she’s a Muslim, that she’s married to me,” he said.

Both said they want children of their own because they love each other. But it would not be easy for a child, who would be half Rohingya and not recognized as a Burmese citizen.

The marriage has given Setara a profound insight into life in the camps for the Rohingya displaced.

“It’s just like hell,” she said. “They have no hope. They have no medical treatment. People are more and more scared.”

Since Rohingya insurgents staged dozens of attacks in the northern half of Rakhine state that triggered a major backlash by security forces in late August, life in the south, where Setara and her husband live, has stayed calm but only gotten harder.

International aid for displaced camps has been held up by authorities, and humanitarian workers have been forced to scale back visits. Hussein said the government has also stopped Rohingya from fishing, a critical source of income, until they accept “national verification cards” which identify them as “Bengalis.” Many have resisted because they insist on being identified as Rohingya, a term the government does not recognize.

In her despair, Setara sometimes tells her husband she is going to leave. When he begs her to “stop saying that,” she tells him she doesn’t mean it.

“It doesn’t mean that I don’t love him. I just don’t like the way we have to live here,” she said. “I keep telling myself every day that I need to be strong …. but sometimes I just want to fly away.”

Still, she says, that is something she will never do. “The future for the Rohingya is bad,” she said. “But I will never leave … it is my destiny to be here, to be with my husband.”