LONDON (RNS) — The archbishop of Canterbury, head of the Church of England and the wider Anglican Communion, was an oil executive who helped run a major corporation before he became a parish priest.

The latter job was unquestionably the most stressful he ever had, Justin Welby has said.

“It was isolated, insatiably demanding, and I was, on the whole, working without close colleagues.” The role is, “for many, quite overwhelming and exhausting,” he said.

This kind of pressure may well explain why increasing numbers of his priests in the Church of England are seeking help outside the church for their problems. Faced with demanding congregations, rarely being off duty, piles of paperwork and disciplinary procedures they often feel are unfair, priests are turning instead to trade unions for support.

According to one of Britain’s largest unions, Unite, there has been a rapid increase in the past year in the number of Anglican parish priests, or vicars, joining its specialist faith worker branch. Almost 1,500 priests plus a few rabbis and imams joined the union last year — an increase of 16 percent in 12 months.

The Anglican vicars are joining despite not having the usual British employment rights, because they are termed “officeholders” and cannot take their complaints to an employment tribunal. And while they cannot pursue rights they don’t have as members of Unite, they can seek counsel and support there from others familiar with their travails.

According to the Rev. Peter Hobson, who is head of the priests’ Unite branch, Church of England Clergy Advocates, vicars are turning to the union because they are under pressure from all sides — from the people in the pews and from their bishops.

“Although it is a vocation, it is also a very difficult role,” Hobson said.

“The workload is enormous. In a consumeristic world, people expect you to deal with their needs instantly, and the bishop, while he is a pastoral figure, is also managerial. And the managerial approach is coming more and more to the fore,” he said.

Hobson said this more managerial approach makes relationships between clergy and bishops more difficult, and clergy consequently need more advice and someone “on their side,” as it were, from outside the church when there are tensions over the way priests are fulfilling their role. This is where a trade union such as Unite steps in.

While the pressures of being a priest in city centers are considerable, with churches coping with transient populations, it is the rural vicars who are facing the toughest times, according to Hobson.

“We’re in a post-Christendom world and in rural areas, more and more benefices are being run by one priest,” he said.

His words are borne out by a major six-part television documentary series starting this week on British television. Called “A Vicar’s Life,” it focuses on the work of four priests in the Diocese of Herefordshire — the most rural part of England, next to the Welsh border — and reveals vicars, despite working in a seemingly peaceful, idyllic rural Britain, struggling to cope with the pressures of their roles.

Many are responsible for six parishes each and travel great distances to minister to their congregations. The documentary also highlights the problems of homelessness, unemployment and loneliness in the English countryside, with many people turning to the church for help after considerable cuts to government services. 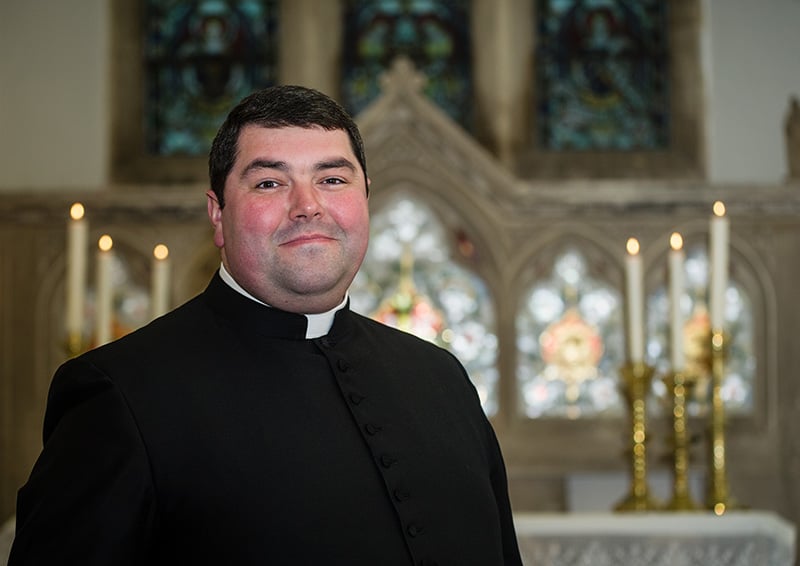 The Rev. Matthew Cashmore in “A Vicar’s Life.” Photo by Richard Weaver

One of the curates featured in the documentary, the Rev. Matthew Cashmore, who was until recently a publishing executive, has found the role of priest to be highly demanding.

“The church is rediscovering its role and is offering unconditional love to people in a practical way,” he said, acknowledging that this is vital but puts considerable pressure on the clergy.

Another priest in Hereford Diocese but not featured in the TV series is Rector Sarah Jones, who also came into the church after a career in industry and who is now in charge of three benefices in the picturesque town of Ross-on-Wye.

“I can honestly say that this is the toughest role I have ever had,” she said. While vicars work a six-day week, she said that they are “always on call.”

“People nowadays expect and demand a quick response if they contact you. And there are some people who seem to feel free to express their anger to clergy in a way they would never do to someone else. They think we should turn the other cheek.”

Jones agrees that rural priests in particular have a very stressful life.

“Most of us find that we do our best pastoral work when we are in tune with a particular community. But if you have five or six communities to look after, it becomes very hard.”

She is one of the Anglican clergy who has joined the Unite union, finding it reassuring to have extra support in the background.

While she believes that bishops step in effectively when one of their clergy has a clear crisis, she fears that “the system is such that people are too busy to give pastoral care on an ongoing basis.”

But as rector, Jones finds one thing above all helps. “The rhythm of prayer and the Scriptures is the greatest help there is in handling stress.”