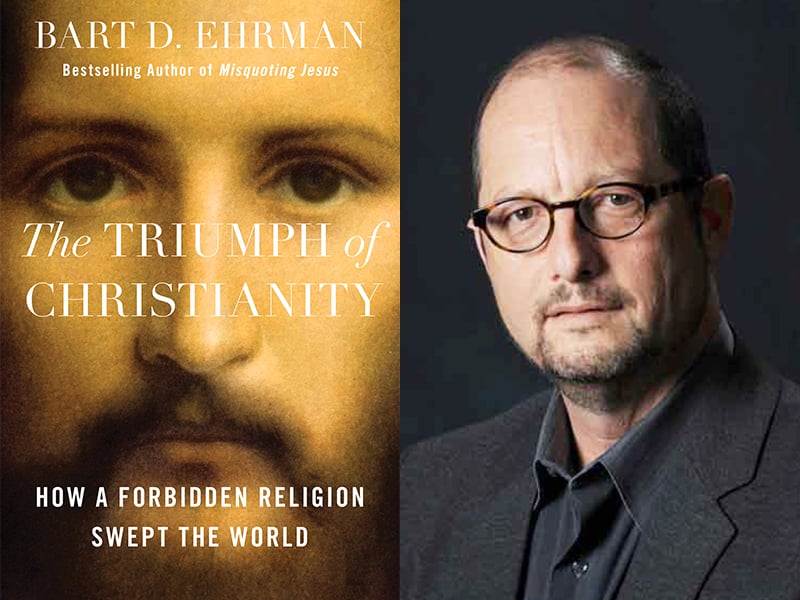 “The Triumph of Christianity: How a Forbidden Religion Swept the World” and author Bart D. Ehrman.
February 9, 2018
Yonat Shimron

With titles like “How Jesus Became God,” “Forged” and “Misquoting Jesus,” he gained a devoted following of fellow agnostics, atheists and ex-Christians.

They may not appreciate the title of his newest book, “The Triumph of Christianity: How a Forbidden Religion Swept the World,” which is set to be released Tuesday (Feb. 13). In it, Ehrman tries to explain a long-puzzling historical drama: How did 20 or so Jesus followers come to convert much of the world in the space of 300 years? (Sociologist Rodney Stark published a book of the same title in 2011.)

Most of the research into the first few centuries after Jesus’ crucifixion around the year 33, he concedes, is not new. Scholars have been grappling with how Christianity exploded on the scene for a long time. Ehrman's goal is to bring that issue to the masses in plain English, marshaling the evidence — most of it written in Greek and Latin — and crunching the numbers.

True to form, Ehrman, a professor at the University of North Carolina at Chapel Hill, doesn’t exalt in Christianity's success, despite his new book's title. “In this book I have tried to explain the triumph of Christianity without making it a triumphalist narrative,” he writes. (As someone who has written 20 books for lay readers, Ehrman may know something about what titles are likely to sell.)

RNS caught up with Ehrman before he left for Washington, D.C., to give four lectures as part of a sold-out Smithsonian Associates program on Saturday. He will also give a reading at Politics and Prose on Sunday.

Why did you focus on this particular era of Christian history?

The thing that struck me was how significant this Christian revolution was. Christianity became the most powerful institution in the Western world. My question in the book is: How did that happen?

How do you get from 20 insignificant, illiterate, lower-class day laborers in a remote part of the empire to 30 million people and end up being the most influential power in the West? I’ve always thought it was a very important question and the book tries to answer it.

You conclude that the conversion of Roman Emperor Constantine to Christianity in the year 312 was not the signal event that led to Christianity’s rise. Explain.

What I came to realize is that it probably would have happened whether or not Constantine converted. If you actually plot the growth of Christianity, you realize that it’s an exponential curve. Christianity is gaining a few people early on and they’re gaining massive numbers of people later on. It’s like investments: The rate of growth ends up creating huge amounts of money later when you have a lot of money; earlier, when it was just a little bit of money, it’s little growth.

Christianity appealed to pagans, you write, because of its emphasis on miracles. Why?

One thing (pagans) have in common is that they’re worshipping the gods because of the benefits the gods can provide. The gods can make sure that it rains, that crops grow, livestock reproduces. They can protect women in childbirth, heal people that are sick. It’s all about divine power. If Christians are going to convert people away from the religious practices that they’ve been involved in for millennia, it has to be because your divine power is more effective than theirs. The way you show the Christian God is more powerful than the other gods is by showing that he does miracles — and you have to show people that his miracles are superior. That’s what the Christians do.

Are there any lessons in that about the growth of Christianity in Africa and Asia?

It is interesting that liberal Christianity in America, as we think of it, tends to be more rational and less interested in supernatural displays of power, healing miracles or speaking in tongues. That kind of liberal Christianity simply doesn’t have much influence on the wider world. The places that are converting are where you get these very conservative Christian groups going in who have no trouble talking about miracles happening. I suspect it’s a similar phenomenon.

You write about how Christianity went from being persecuted to being persecutors (of pagans and Jews). Do you see modern parallels?

A lot of people have the image of early Christianity being a constantly persecuted faith and that Christianity was declared illegal and so they had to go into hiding and hung out in the catacombs of Rome. When you actually look at the evidence you see the persecution was actually very sporadic and fairly rare and regional.

You have a reputation of being the debunker of Christian dogma but now you’re talking about its triumph. Is that a contradiction?

As a historian, I’m neutral on whether it was good or bad. If Christianity hadn’t taken over, something else would have happened. History would have gone on. But history would have been incalculably different. There are certain aspects of the triumph of Christianity that everyone can appreciate. Just in terms of culture: Think of art. If Christianity hadn’t taken over, we wouldn’t have had Leonardo, or Michelangelo or in music, or philosophy, or literature. We’re all grateful we have this fantastic cultural heritage.

On the other hand, a lot was lost when Christianity triumphed. Thousands of pieces of pagan art were destroyed. Pagan literature is lost to posterity. So a lot was gained in the triumph of Christianity and a lot was lost, and certainly effectively it was a triumph, but whether that was a good thing or a bad thing, I think people can have different evaluations of that.

In your books you try to explain historical methods. Why is that important?

What’s next for you?

My next step has a very loose connection with "The Triumph of Christianity." Before Christians came along, most pagans had no idea that their religion was going to affect what happened after they died. A lot of pagans thought that when you died, that was the end of the story. You just ceased to exist.

Christians came along and said, "No. There’s a heaven and hell and you’re going to go to one place or the other. If you believe in Christ, you’ll go to heaven. If you reject Christ, you’ll be tormented eternally." This was a very effective evangelistic tool and what the Christians did was that they invented a need that pagans didn’t know they had.

This idea of your soul going to heaven or hell is certainly not taught in the Old Testament, and it wasn’t taught by Jesus. So why do Christians have this idea? Jesus didn’t think that when your soul died it went to one place or the other in eternity. But that is what Christians think, so my question is where did that come from? My next book is going to be on the invention of the afterlife.