WASHINGTON (RNS) — Dozens of nuns, priests and lay people were arrested in the Capitol Rotunda as part of a Catholic-led effort to persuade lawmakers to protect undocumented immigrants who were brought to this country as children.

Those arrested were part of a group of at least 200 Catholic demonstrators who marched on Capitol Hill on Tuesday morning (Feb. 27) to draw attention to the fate of the immigrants, known as “Dreamers,” all of whom had been granted protection during the Obama administration through the Deferred Action for Childhood Arrivals program. President Trump has taken steps to rescind it.

DACA now covers 800,000 people who face deportation without it; hundreds of thousands more never signed up for the program but are believed to be in the same situation. The DACA participants hope for a legislative solution — including a path to citizenship — that polls show most Americans support.

READ: Today I plan to get arrested

A slate of faith groups have condemned Trump’s decision to phase out DACA, and many religious leaders — including more than 80 rabbis and other Jewish activists in January — have been arrested in recent months during demonstrations to support the immigrants. 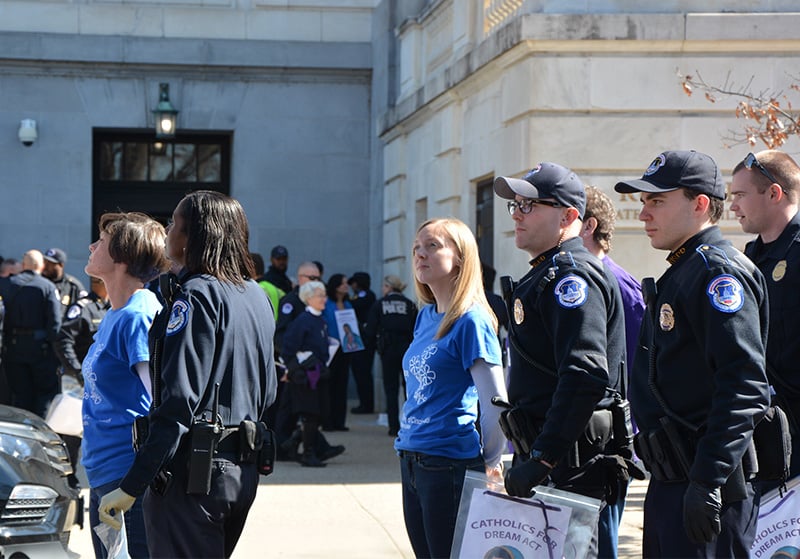 Catholic demonstrators are arrested by police on Capitol Hill on Feb. 27, 2018. RNS photo by Jack Jenkins

Before their arrest, the Catholics filed past the Supreme Court as they sang hymns and held signs with the words “Catholics Stand with Dreamers” emblazoned next to a visage of the Virgin Mary.

A Supreme Court decision on Monday appears to have forced the federal government to continue reissuing DACA protections for now, but advocates say they can’t afford to rely on the courts.

“We have to insist that it’s not a time to wait around anymore — our Dreamers have heard plenty of false promises, but their lives are on hold,” said Bishop John Stowe of the Diocese of Lexington, Ky., addressing the crowd on the Capitol lawn, where he was followed by other Catholic clergy and immigrants alike.

The Rev. Thomas Reese, a Jesuit priest and columnist with Religion News Service, was one of many speakers who singled out House Speaker Paul Ryan, who has often invoked his Catholic faith during his political career. Reese criticized what he sees as Ryan’s failure to pass legislation on the issue and invoked a passage from the Book of Acts where the Apostle Paul is asked by God why he persecutes Christians. 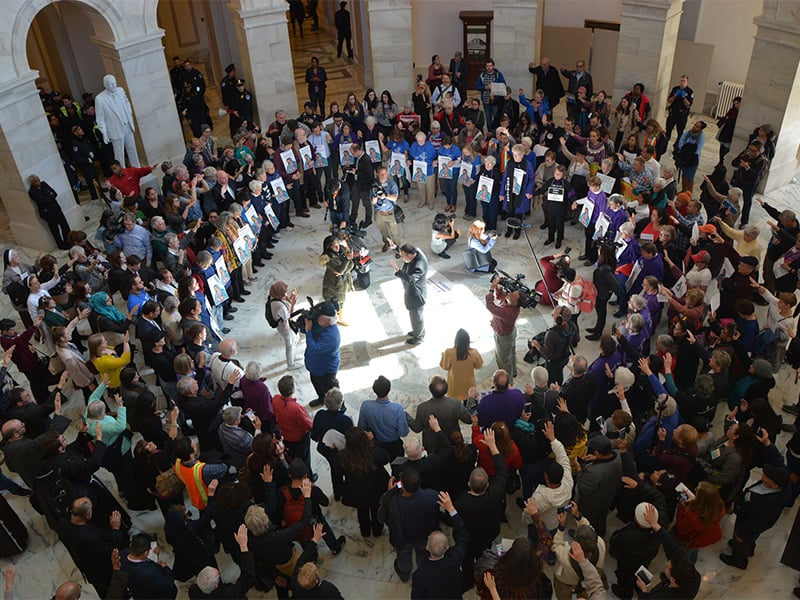 Roughly 200 Catholic demonstrators marched on Capitol Hill to demand congressional action on the Deferred Action for Childhood Arrivals program, with the demonstration ending in the Capitol Rotunda on Feb. 27, 2018. RNS photo by Jack Jenkins

“Speaker Paul Ryan needs to hear those words, so let’s tell him: ‘Paul, why do you persecute me?!’” Reese shouted. The crowd joined in, transforming the quip into a chant.

The group then entered the Capitol, knowing that gathering under its dome would likely result in their arrests. Many of those risking arrest said they were doing so for the first time but that their faith compelled them to act on behalf of undocumented immigrants.

“I have never been arrested in my life, but with the blessing of my community, I am risking arrest today as an act of solidarity with our wonderful Dreamers,” said Sister Elise Garcia of the Adrian Dominican Sisters, who traveled from Michigan to participate. “To our leaders in Congress and in the White House, I say: Arrest a nun, not a Dreamer!”

After a brief prayer led by Stowe, a smaller group of about 40 — many of them nuns — began praying the rosary as police officers lined up behind them while issuing warnings with a bullhorn. Reese and several older nuns stood in a sunbeam and raised their fists in defiance as they belted the hymn “Amazing Grace,” their silhouettes casting long shadows across the stone floor. 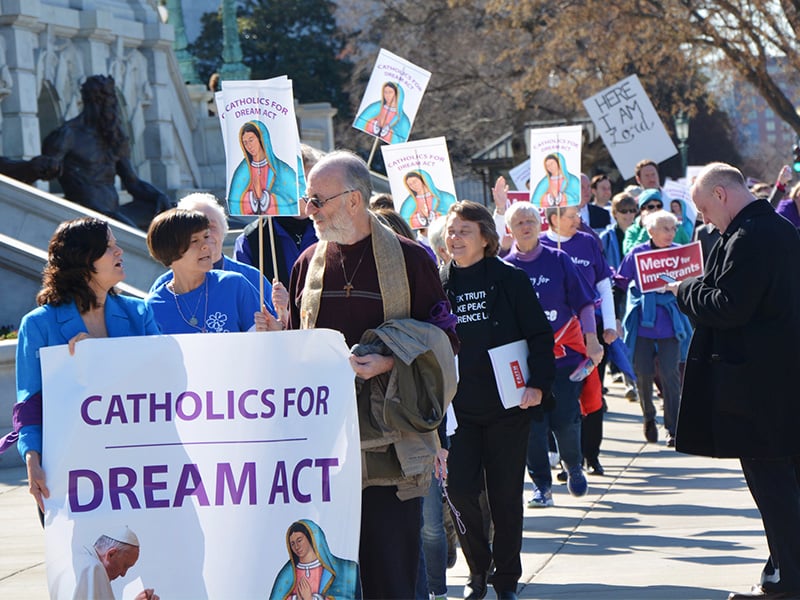 When they refused to move, police quietly handcuffed them one by one.

“Paul! Paul! Why are you persecuting me?!” the demonstrators shouted again as officers led them away, their hands bound behind their backs. Supporters in the balcony applauded as they left.

Reese and all others arrested were charged with unlawfully “crowding, obstructing, or incommoding,” according to a Capitol Police spokesperson. They elected to pay a fine before being processed and released. 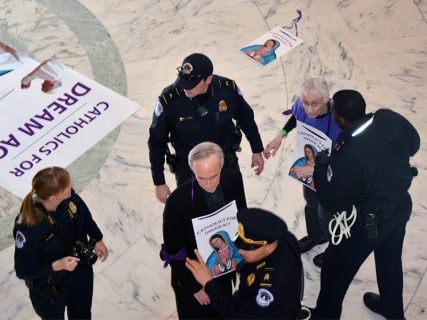 The Rev. Thomas Reese is arrested during a National Catholic Day of Action with Dreamers rally in the Capitol rotunda on Feb. 27, 2018. RNS photo by Jack Jenkins

The protest, organized by several groups, including the Franciscan Action Network, PICO and Faith in Public Life, is but the latest effort in a multiday campaign by Catholics on behalf of the immigrants.

On Monday, the U.S. Conference of Catholic Bishops sponsored a “call-in-day” that encouraged parishioners across the country to contact members of Congress and ask them to “show the leadership necessary to find a just and humane solution.”

Ashley Feasley, policy director for the USCCB’s migration and refugee services office, said the push was an expression of Catholic social teaching.

“One of the things that is so important for us is this belief in the human dignity of all people, and the ability for all people to be with their family and the sanctity of family,” Feasley said.

“To see (Dreamers) face the loss of the ability to work legally and the threat of deportation is very disturbing, and goes against this idea of dignity and family unity.” 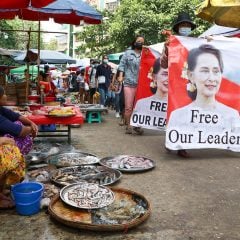 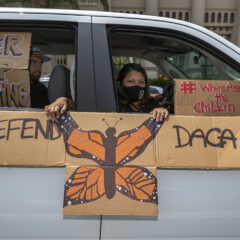 Opinion
Why Congress needs to act on immigration: It’s our nation too
Follow us on Facebook!
Submit your photos to RNS