Protesters hold signs up in opposition of the nomination of Mike Pompeo to be the next secretary of state, at the start of a Senate Foreign Relations Committee confirmation hearing on Pompeo’s nomination on Capitol Hill in Washington, on April 12, 2018. (AP Photo/Jacquelyn Martin)

WICHITA, Kan. (RNS) — Under fire from Muslim, Jewish and human rights groups for a record of anti-Muslim remarks, Secretary of State nominee Mike Pompeo is receiving spiritual support from his home church in Kansas.

Eastminster Presbyterian Church, where Pompeo is a member and former deacon and Sunday school teacher, prayed Sunday (April 15) that God would “give him strength” in his uncertain confirmation process.

“This morning, we want to pray for our dear brother Mike Pompeo as he goes through the confirmation process,” the Rev. Warren Snyder, Eastminster Presbyterian’s assistant pastor, said as members bowed their heads.

The Senate Foreign Relations Committee began hearings Thursday on whether to confirm Pompeo — the outgoing CIA director nominated by President Trump to replace Rex Tillerson in the top diplomatic post.

In advance of Pompeo’s testimony before the Senate panel, the Rev. Stan Van Den Berg, the Wichita church’s senior pastor, issued a call to prayer Wednesday. He cited a request from Susan Pompeo for “specific prayer during this very important and stressful time.” “He very well may be the first Secretary of State nomination not to receive a majority vote out of committee,” Van Den Berg said on the church’s website. (It has happened, but not since 1925, CNN reported.)

“Our church cares about the leadership of our country and about having Christian representation there,” the pastor wrote to the congregation. “We also care about the Pompeos as members of our church family.

“Mike has enemies because of his faith who may try to paint him in a poor light and make it difficult for him to reach the Secretary of State position. Let’s cover Mike and Susan in prayer for protection from the enemy, from personal attacks, and that the Lord’s favor be upon Mike. Susan also asked for prayers for Mike to have patience, peace, intellectual agility and a pleasant countenance throughout tomorrow’s hearing.”

Before his election to Congress in 2010, Pompeo, a Republican, served as a deacon at Eastminster Presbyterian and taught Sunday school for elementary-age children, said Brett O’Donnell, a political strategist to whom the church’s communications director, Courtney Browning, referred questions about Pompeo and his family.

Pompeo, 54, graduated first in his class at the U.S. Military Academy at West Point in 1986. After leaving U.S. Army active duty, he served as an editor of the Harvard Law Review while earning his law degree. He founded an aerospace company and served as president of an oil company before winning four two-year terms in the House. He gave up his seat in January 2017 to join the Trump administration as head of the CIA.

“Mike has a group of pastors who have prayed with him regularly during his time as a congressman, including several pastors from Eastminster,” O’Donnell said in an email. 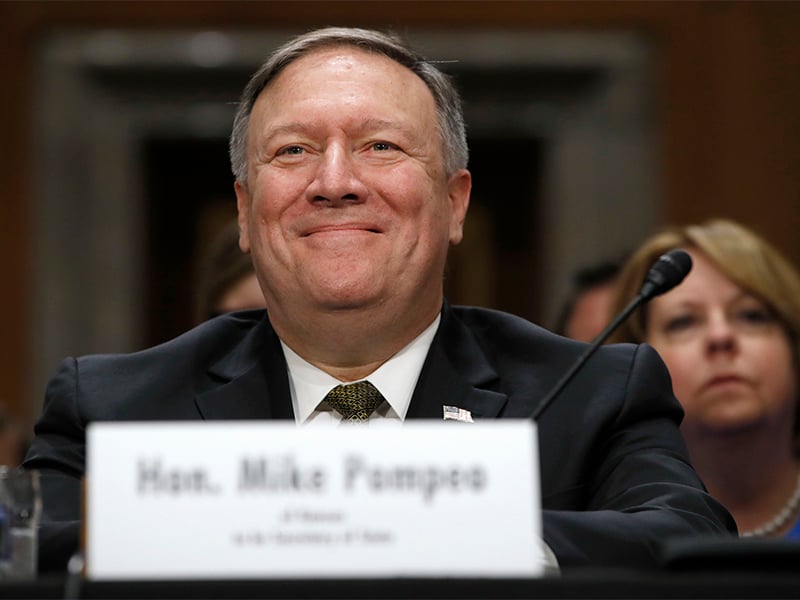 CIA Director Mike Pompeo smiles after his introductions before the Senate Foreign Relations Committee during a confirmation hearing on his nomination to be secretary of state, on Capitol Hill in Washington, on April 12, 2018. Pompeo’s remarks were the first chance for lawmakers and the public to hear directly from the former Kansas congressman about his approach to diplomacy and the role of the State Department, should he be confirmed to lead it. (AP Photo/Jacquelyn Martin)

In recent days, Religion News Service made repeated requests for interviews with Eastminster Presbyterian leaders and members who know Pompeo, but those attempts were unsuccessful. An RNS writer attended Sunday’s service, but on the condition that he not approach worshippers for interviews.

Eastminster Presbyterian is affiliated with the Evangelical Presbyterian Church, a conservative evangelical denomination with more than 600 congregations and an estimated 145,000 members in at least 46 states, the Bahamas and Puerto Rico.

The Wichita church joined the EPC after breaking away from the Presbyterian Church (USA) over that more progressive denomination’s 2011 decision to allow openly gay people in same-sex relationships to be ordained as ministers, elders and deacons.

At last week’s hearing, Pompeo, who believes that marriage is a sacred union between one man and one woman, faced questioning from Sen. Cory Booker, D-N.J., over his opposition to same-sex nuptials.

“Is being gay a perversion?” Booker asked.

“Senator, when I was a politician, I had a very clear view on whether it was appropriate for two same-sex persons to marry,” Pompeo replied. “I stand by that.”

“So, you do not believe that it’s appropriate for two gay people to marry?” Booker pressed.

“Senator, I continue to hold that view,” said Pompeo, who stressed that he treated gay couples within the CIA “with the exact same set of rights” as heterosexuals.

Meanwhile, Pompeo’s remarks revolving around the idea that Islam is an inherently violent religion and that most U.S. Muslim organizations want to replace American law with Islamic law, known as Shariah, have drawn the ire from Muslim and Jewish civil rights organizations.

READ: Muslims find Jews standing behind them in opposition to Pompeo’s confirmation

Pompeo has not been shy about proclaiming his belief in Jesus as the only true path to salvation.

Speaking to a Wichita church group in 2014, the then-congressman said that radical Muslims “believe that it is religiously driven for them to wipe Christians from the face of the earth.”

“It is absolutely a minority within the Muslim faith,” Pompeo added. “But these folks are serious, and they abhor Christians and will continue to press against us until we make sure that we pray and stand and fight and make sure that we know that Jesus Christ our savior is truly our only solution for our world.” 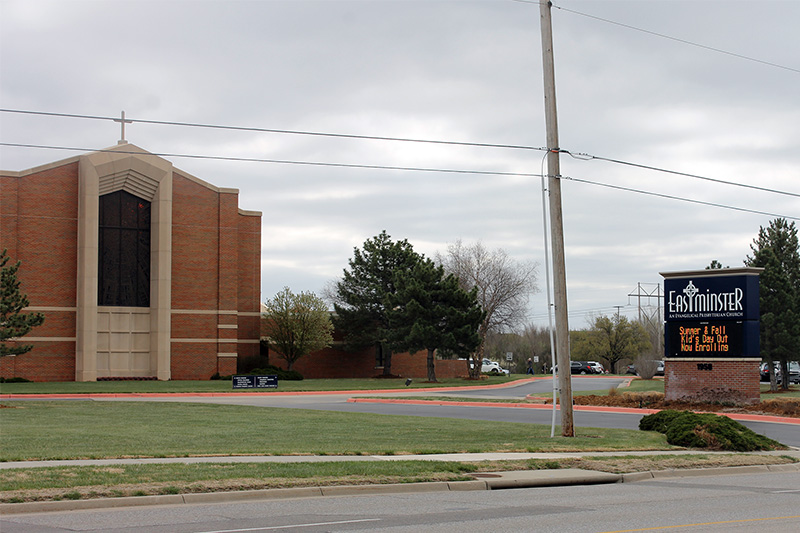 The outside of Eastminster Presbyterian Church in Wichita, Kan., on April 15, 2018. Secretary of State-designate Mike Pompeo is a member and former deacon at Eastminster. RNS photo by Bobby Ross Jr.

Pompeo retains his status as an “ordained deacon,” even though he’s not currently serving in that role, said Jeff Jeremiah, the EPC’s stated clerk — the denomination’s ecclesiastical and executive leader.

“If you are elected and ordained as a deacon in the EPC,” Jeremiah said, discussing Pompeo, “that means that that congregation has identified you as a compassionate, people person who wants to help minister in a redemptive way and a practical way to hurting people in a local church and in the community.”

In his sermon Sunday on “loving like Jesus,” Van Den Berg did not mention Pompeo, but he did speak to the church’s role in the world.

Van Den Berg highlighted the church’s plans to share its building starting later this month with a Swahili-speaking congregation made up of refugees from Congo.

“We exist to bless the city and the world,” Van Den Berg told the congregation. “Eastminster, on its best days, gives itself away for the sake of the world and the sake of love.”