The LDS First Presidency had a historic meeting with NAACP leaders this morning, but the organizations’ resulting joint announcement was less of a lightning rod than a very convincing fake news release that apologized for the Church’s past racism.

In the fake story, published with a URL that was only one character off from the Church’s official website of mormonnewsroom.org, LDS Pres. Russell M. Nelson was quoted as issuing a full apology:

Today, as Prophet, Seer and Revelator, and President of the Church of Jesus Christ of Latter-Day [sic] Saints, I offer a full unqualified apology for the error of racism which was taught from this office and in the tabernacle and over the pulpits of our churches the world over. I am joined by my counselors in the First Presidency and the full Quorum of the Twelve Apostles in making this apology and we collectively bear witness and testimony of the devastating effects of racism which were perpetuated by leaders of the church in the past.

The faux statement went on to specify some of the racist acts the Church had perpetuated, such as teaching “false and hurtful ideas about curses, skin color, and spiritual worthiness,” and excluding anyone with black skin from the Church’s temple rituals. That was the Church’s policy until 1978.

The website was clearly calculated to exactly emulate the layout and design of the Church’s official website. For comparison, here is a screen shot of this morning’s fake news story.

A fabricated press release claiming to be from the Church of Jesus Christ of Latter-day Saints. May 17, 2018.

And here is a screen shot of this morning’s actual news release from Mormon Newsroom, released shortly thereafter.

The real press release from the Mormon Newsroom of the Church of Jesus Christ of Latter-day Saints. May 17, 2018.

In the Church’s actual statement, issued jointly with the NAACP, no mention was made of past racism at all. Rather, the organizations called for “greater civility, racial and ethnic harmony and mutual respect.” They pledged to work together at the local level in the future on at least one service project to help “increase education and wage improvement.”

Details of the fake news release—fonts, sizes, colors, white space, and language—appear to have been carefully arranged to mimic the official Church’s site, with the exception of two subtle errors regarding the Church’s full name (it’s Latter-day Saints, not Latter-Day Saints or Latter Day Saints).

Mormons’ reactions to the fake apology tended toward initial joy followed by grief and anger, all playing out in real time on social media.

“I was fooled by this earlier and had some really painful whiplash,” said Natalie Prado, a North Carolina legal administrator, on Facebook. “There was a much better, less cruel way for this person to make a point. It’s deeply unkind to play with people who are hurting.”

Prado told RNS that she first discovered the fake story on Twitter through the stunned but jubilant reaction of Mormon convert Janan Graham-Russell, an African American doctoral student at Harvard.

Russell, who has written previously about the tortured legacy of racism that persists in Mormon culture, soon had her joy replaced by anguish as she learned the news release was a cruel hoax: 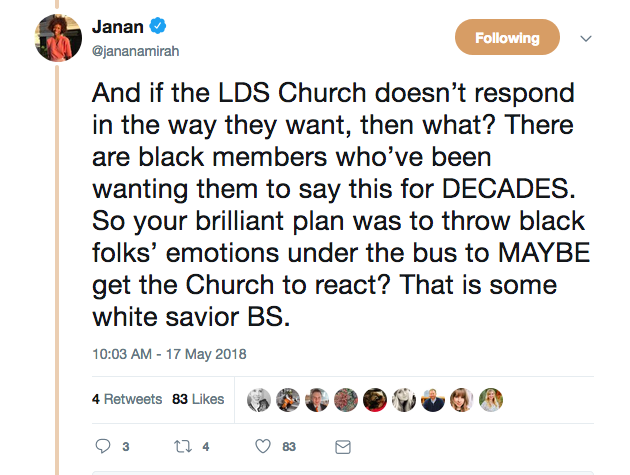 It is unclear who created the fake news story or what they hoped it would accomplish. According to a search on Who.Is, the domain name was first registered two days ago in Ontario, Canada.

LDS Church spokesman Eric Hawkins told RNS that the Church’s Public Affairs Department did not know about the fake statement’s background or provenance. “We haven’t provided any comment on it, other than to let people know it is a fake site,” he said.

In the meantime, plans are on track for the LDS Church’s “Be One” celebration in Salt Lake City on June 1, where LDS leaders will join African American members and musicians, including Gladys Knight, to celebrate the 40th anniversary of the Church extending priesthood and temple blessings to African Americans.