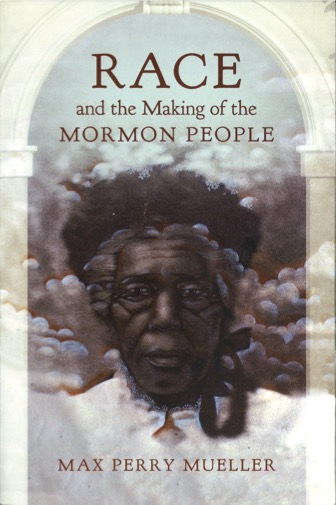 (RNS) — The last few days have seen some interesting posts and articles about Mormonism and race, including Martin Marty’s most recent Sightings column and an Atlantic article called “When Mormons Aspired to Be a ‘White and Delightsome’ People.”

Both delve into the history of Mormonism and race, and both reference the work of historian Max Perry Mueller, whose new book “Race and the Making of the Mormon People” argues that the Book of Mormon both reinforced and challenged 19th-century Americans’ ideas about race — and that it set the stage for how Mormonism would develop in the decades to come.

Here, I talk with Max about the book and its findings about Joseph Smith, Brigham Young and black Mormon pioneers like Jane Manning James. — JKR

You say that the earliest Mormons had a “vision of restorative racial universalism” that shows up in the Book of Mormon’s ideal that the Lamanites will acquire white skin when they become righteous.

For Mormons, race fundamentally is about stories, about how in the ancient biblical past and the Book of Mormon past, different members of one family sinned against other members of that family. And for those sins, they were cursed. The people interpreting the Bible and the Book of Mormon have read those curses as racial divisions: The descendants of those who committed those sins would have to bear the punishment on their skin.

And so, according to early Mormon theology, because race was not of God’s design but the result of human failing, race therefore can be overcome if those “cursed” members of the human family restore themselves to the gospel that their ancient ancestors rejected.

Many Mormons today trace Mormon racism to Brigham Young, not to Joseph Smith. But you point out that Smith embraced this idea too, or even originated it — the idea that people with black skin needed to be somehow purified.

Joseph Smith was certainly a man of the 1830s when he emerged onto the national scene. And he, like most Americans, ascribed to the same origin story of racial difference. They took these stories of curses that resulted in human division very literally.

In the biblical stories of Cain and Abel, or Ham and Noah, where these curses first are mentioned against Cain and against Ham’s descendants, there is no explicit mention of those curses resulting in dark skin. Joseph Smith reads the subtext into the text in his various translations, including the Book of Mormon and other sacred scriptures.

What’s important to recognize here is that Joseph Smith did not believe that those curses would prevent people of African descent from becoming full members of the church, like in having priesthood or access to the temple. Later on, his successors pointed to those scriptures as key reasons to justify their racist exclusionary policies, especially against people of African descent.

One thing that’s groundbreaking in your book is that you bring so many marginalized voices back into the narrative.

I was really interested in exploring how people we call nonwhite participated, fought against and even sometimes accepted the exclusionary theologies developed by the Brethren.

One of those was Jane Manning James, whose story is key in the book. Can you tell us more about her?

Her story is one of the most thoroughly Mormon stories in Mormon history. She was converted by Mormon missionaries in Connecticut in 1842 or 1843, then traveled with her whole extended family to Nauvoo, including her young son Sylvester. In Nauvoo, she was welcomed with open arms into the Nauvoo Mansion House by Joseph and Emma Smith. She lived with the Smiths and worked with them as a washerwoman for the next year or so, until Joseph’s assassination.

During that period, she became a confidante to the Smith family. She even claims that the Smiths offered to adopt her as their spiritual child, but she said no because she didn’t understand the Mormon theology of spiritual adoption. That decision was one she regretted for the rest of her life.

After Joseph’s assassination, she trekked to Utah, arriving in September 1847, so she belongs to that very special class of 1847 pioneers. And in Utah, she helps to build up Zion, working as a farmer and a seamstress, and as a matriarch to a large Mormon family.

One thing she did in Utah in particular was be a storehouse of memories of Joseph Smith. She, among others who knew him from the Nauvoo days, kept his memory alive. She became such a prominent figure, and really a singular figure, in Salt Lake that near the end of her life she and her brother Isaac had their own special reserved seats in the Tabernacle when the church gathered for special events.

What’s fascinating about Jane Manning James is that she was taught this theology of the potential for nonwhites to be restored to whiteness from Joseph Smith himself, and also Hyrum Smith, Joseph’s older brother, back in Nauvoo. She worked to demonstrate through her actions that she accepted the notion that she was a member of a cursed branch of the human family, but she could exert her human agency to overcome that curse through devotion to the gospel and her work to build up the kingdom.

By the time she died in 1908, Hyrum’s son Joseph F. Smith, then church president, taught that no matter what people like Jane Manning James did, she could never overcome the curse that placed her on the margins of the Mormon community, and also the margins of the human family. She held on to the lessons that she received from Joseph F. Smith’s father Hyrum, that she could overcome and be restored. Those lessons included the offer to become Joseph’s spiritual daughter. She petitioned Joseph F. Smith and other church leaders for decades to have that sealing occur. Smith and others refused to seal her as a child, but in 1894 did seal her in the temple (though she wasn’t allowed to participate herself) as a “servitor” to the Smiths for eternity.

You note that just four months after James’ death in April 1908, the First Presidency issued a statement saying that “negroes or anyone tainted with negro blood” could be baptized, but not ordained or given access to the temple. So let me ask about the timing: Not a coincidence? It’s like they waited until after Jane’s funeral to make the policy explicit.

I don’t think it is a coincidence. Of course, the exclusions had been practiced since the 1850s, but with James’ death, a vestige of the church’s more racially inclusive beginnings has passed from the scene. And the church leaders therefore could more easily make the argument that Mormons could not only be exemplary white Americans, but that their church could epitomize American whiteness.

Recently we saw the LDS Church coming out against white supremacist groups. What do you think is going on here?

That is essential for the church’s present and future because Mormonism is truly a global religion, with more Mormons living outside of the U.S. than inside, and likely more nonwhite Mormons on the church’s rolls than white ones. And yet, there are parts of Mormon whiteness embodied in cultural aspects of the church, like notions of dress, family organization and worship style. Those remain a key part of Mormon identity worldwide.

So instead of white exceptionalism, the Church is really grappling today with American exceptionalism, which remains a key part of the Church’s identity. So while it’s amazing and something to applaud when the Church basically subtweets certain infamous white supremacists in its membership, saying their views don’t have a place in the Church’s community, the Church still must grapple with notions of America that still shape its identity.