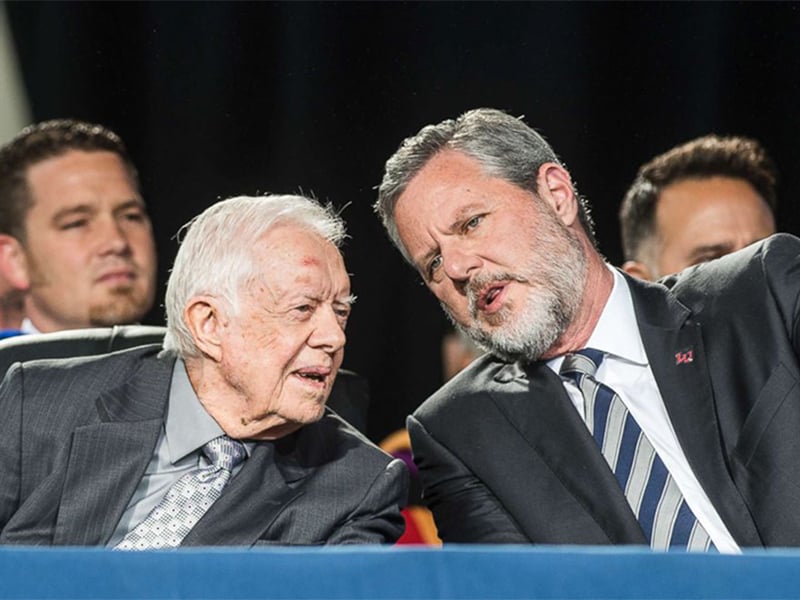 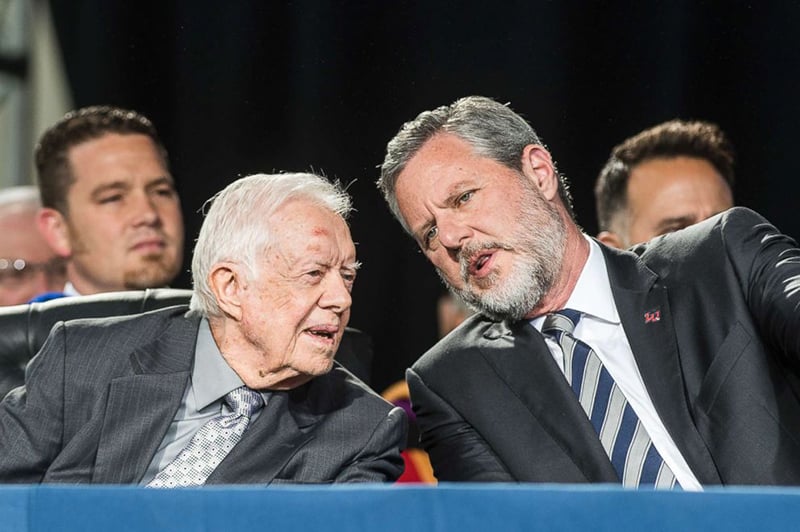 (RNS) — As Jimmy Carter waited to appear before a commencement crowd at Liberty University, it looked like he might be entering the lion’s den. The school, founded by Carter’s political foe, Jerry Falwell Sr., has stayed true to its socially conservative roots. Carter has been steadfastly to the left.

But Liberty President Jerry Falwell Jr. gave Carter a generous introduction, praising his kindness, warmth and humility. In a curious comment, Falwell said: “The longer I live, the more I want to know about a person and give my political support to a person. Policies are important, but candidates lie about their policies all the time to get elected.”

For his part, Carter, 93, resisted the urge to re-litigate old institutional battles. Instead, he deployed his characteristic humility and charm to emphasize his closeness with and affection for fellow Baptists and other Christians in spite of significant differences.

As he always does, Carter emphasized the plight of women and girls who experience sexism and other forms of degradation. He also spoke on themes that progressive Baptists often emphasize: wealth disparity and the threat of nuclear war. But Carter lifted up other issues that, along with sexism, conservative Baptists routinely denounce: human trafficking, discrimination and rising prison populations.

Carter’s address began and ended with standing ovations. His presence and the audience’s generosity called to mind what I viewed as one of the high points of the 2016 presidential campaign: Sen. Bernie Sanders’ visit to Liberty. That event was also a model of civility and mutual respect in spite of profound political disagreements. 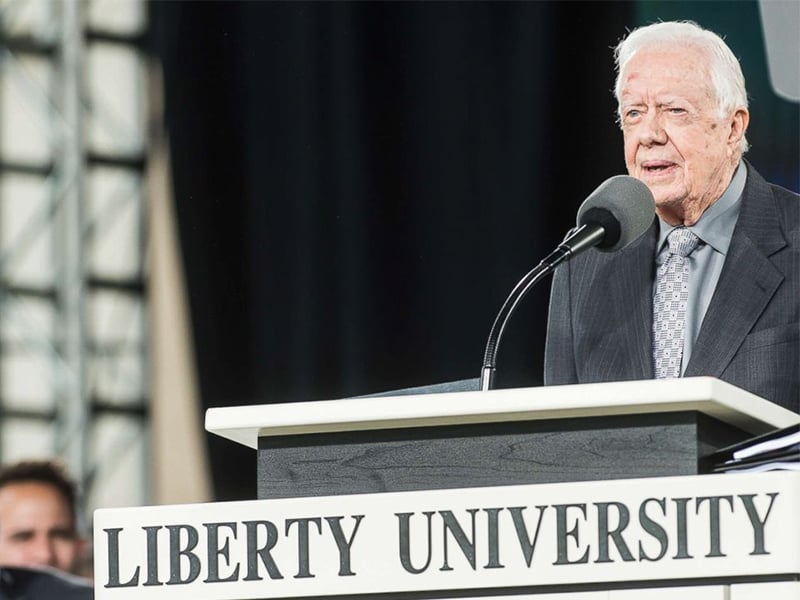 Baptists haven't always been so keen to get along. Extending into many corners of cultural and political life, the Baptist battles have been the biggest story in American religion during my lifetime. Though never “my tribe,” I have witnessed and chronicled these developments for nearly two decades. It seems Carter and Liberty might model a better way.

Thus, when Mr. Carter stood to address Liberty’s graduates and their families, it offered a judicious moment to take stock of where the Baptist battles stand.

When I was born in November 1980, Carter’s presidency was winding down in the wake of Ronald Reagan’s election. Around the world, a wave of fundamentalism was forcing scholars and policymakers to take note of religion, once thought to be on its way out.

Here in the United States, the Southern Baptist Convention was in the earliest stages of a conservative resurgence that would definitively break with mainline Protestantism. The SBC, now America’s largest Protestant denomination, would usher in a new era of leaders who would face public and private temptations concerning influence, faithfulness and proximity to political power.

In 1980, Carter was the only evangelical many elites knew. Liberty University was a fundamentalist Bible college.

Today, Carter is an international humanitarian icon. Grieved by some of the Southern Baptist Convention’s changes, Carter severed ties with the SBC in 2000. This fact was little noted in press reports on his Liberty speech, but the substance of his critique was over an SBC powered by resurgent conservatives who more rigidly specified gender roles. Carter has subsequently expounded on his egalitarian views, making women’s rights a centerpiece of his advocacy work.

In the 11 years since his father’s death, Falwell Jr. has grown Liberty’s prominence through ambitious fundraising and a massive online-degree business. Founded as independent institutions, Liberty and nearby Thomas Road Baptist Church, pastored by the Rev. Jonathan Falwell, are closely linked to the SBC through their relationships with the Southern Baptist Conservatives of Virginia, a rival state convention founded in the mid-1990s over fears that the regular one was run by liberals and heretics.

All this to say that while political officials, candidates and media trumpet Liberty’s political relevance, we still see how endless debates, competing interpretations and divergent emphases in Baptist life have little to do with national politics.

White evangelicals who think they mostly oppose Carter’s politics would do well to give him the same respect Falwell and the Liberty University crowd gave him. Likewise, progressives predisposed to hate Jerry Falwell Jr. should take note of his generosity to Democratic political leaders who visit the campus. Many more Democrats should accept the invitation to speak at Liberty.

Presidents come and go, but the Baptist battles will continue apace. As leaders and ordinary believers debate what it means to be Baptist, these two important leaders with close ties to the presidential office have shown us that politics matter less than we suppose.

Falwell and Carter offered a model of civility and generosity that all Americans, whether Baptist or not, can stand and applaud.