WEBSTER GROVES, MO., June 13, 2018 — Change doesn't come easy, yet Rev. Musa Maina of Kenya recently helped achieve a milestone transformation in the Reformed Church of East Africa (RCEA). For the first time in the church's history, women are approved to be ordained ministers in the church. 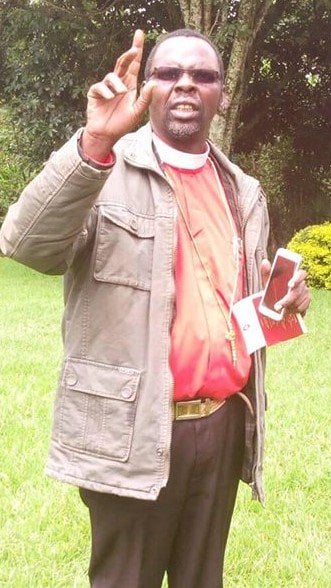 "We continue on the path of female vocational calling with the first female ordination planned for July 2018," he says.

"Notices have been sent, and I feel a strong sense of God's presence and God," he says.

Rev. Maina attributes this progressive church advancement, in part, to the insight he gained while studying at Eden Theological Seminary, Webster Groves, Mo. "We owe this to God who in Revelation 21:3ff, makes a dwelling place among people. I owe the boldness to the formation I received especially at Eden. Whatever lies ahead, one thing I know for sure is that I have no apologies over it," says Rev. Maina.

This realization fueled Rev. Mania's process of transforming church politics to ordain women minsters. While already a pastor and faculty member of the Reformed Institute of Theological Training (RITT) in Kenya, Maina decided to further pursue his religious education at Eden. He earned a Master's Degree in Theological Studies (MTS), graduating in 2005. Thus, began the long path Maina followed to change RCEA policy on women as ministers.

Eden Theological Seminary is a graduate school preparing women and men for ordained Christian ministry. One of six seminaries of the United Church of Christ, the Eden community is committed to advancing the greater good. The school welcomes everyone, regardless of denomination, gender, race or background.

After returning to Kenya, Rev. Maina continued his leadership role in RITT and worked as a moderator for the RCEA. The partnership of RITT/RCEA and Eden allowed him to collaborate and engage the RCEA in new progressive ideas that were more inclusive of women as preachers and worship leaders.

His efforts, with support from Eden and others, resulted in the first RCEA woman, Everlyne Biboko, to attend Eden and earn a MTS degree to prepare for ordination in the RCEA church.

David Greenhaw, Eden Theological Seminary president and professor of preaching and worship, says, "While at Eden, Rev. Maina used our program to help expand his knowledge of critical biblical interpretation. It also exposed him to women in leadership roles in many U.S. churches.

"Our program provides a religious education with a global scope, yet it's intimate in setting," says Greenhaw. "Students live, learn and worship alongside classmates from diverse backgrounds. We help establish a career path for our students through a family of faculty mentors and other students from across the U.S. and the world.

"While studying at Eden, students enjoy easy access to entertainment and culture offered in the St. Louis area. They leave our seminary with a graduate degree in theology and lifelong friendships built with roots in Christ."

Enrollment in the Eden graduate programs ranges from 160 to 200 students. In 2017, the entering class consisted of a 50-50 ratio of gender and race from multiple Christian denominations. Student ages range from those in their 20s to those in their 60s and 70s. It's a diverse student base for exploring different theologies and interpretive approaches.

Deborah Krause, dean of Eden Theological Seminary, describes the educational experience at Eden as partnership between faculty, students and global communities. Sharing knowledge and developing friendships within the global community helped pave the way for the sort of transformation that Maina pursued.

"Rev. Maina told us coming to Eden early in his ministry offered him insight into a more progressive theological context and expanded his understanding of who God has called to church leadership," she says. "His years of effort since graduating from Eden helped lead to the November 2017 RCEA reform which approved of women ordination."

During a sabbatical to Kenya, Krause also broadened her friendships and experienced a knowledge exchange that enriched her work as a teacher of Biblical interpretation.

Krause explains that while in Kenya she taught classes and met with RCEA faculty, many of which were men. During her conversations, she says, "It became apparent that these teachers recognized that women's church leadership was a positive trend that would continue. Yet, there were some parts of the church still holding the traditional view that only men could be leaders."

While Krause was in Kenya, she and Rev. Maina visited many churches where she was invited to preach and lead worship. "This was an opportunity for me to learn about the RCEA and for Rev. Maina to engage the church with an example of women's leadership," says Krause.

"Such a partnership offers opportunity for transformation for all involved. Exposing people to different ideas and approaches relies upon a true partnership between Eden and our students. That's how transformative change happens."

Ultimately, the Eden mission is simple, says Eden President Greenhaw. "When you look around at towns, communities and countries around the world, you see the influence of the Christian church. Not just in congregations, but in hospitals, nursing homes, schools and outreach ministries of many kinds. The church makes its mark every day.

"Eden welcomes everyone, and we hope to provide an exchange of ideas that can be transformative to help our graduates influence positive change for the better good when they return to their home communities."

To learn more about the Eden Theological Seminary, visit https://www.eden.edu/our-story/