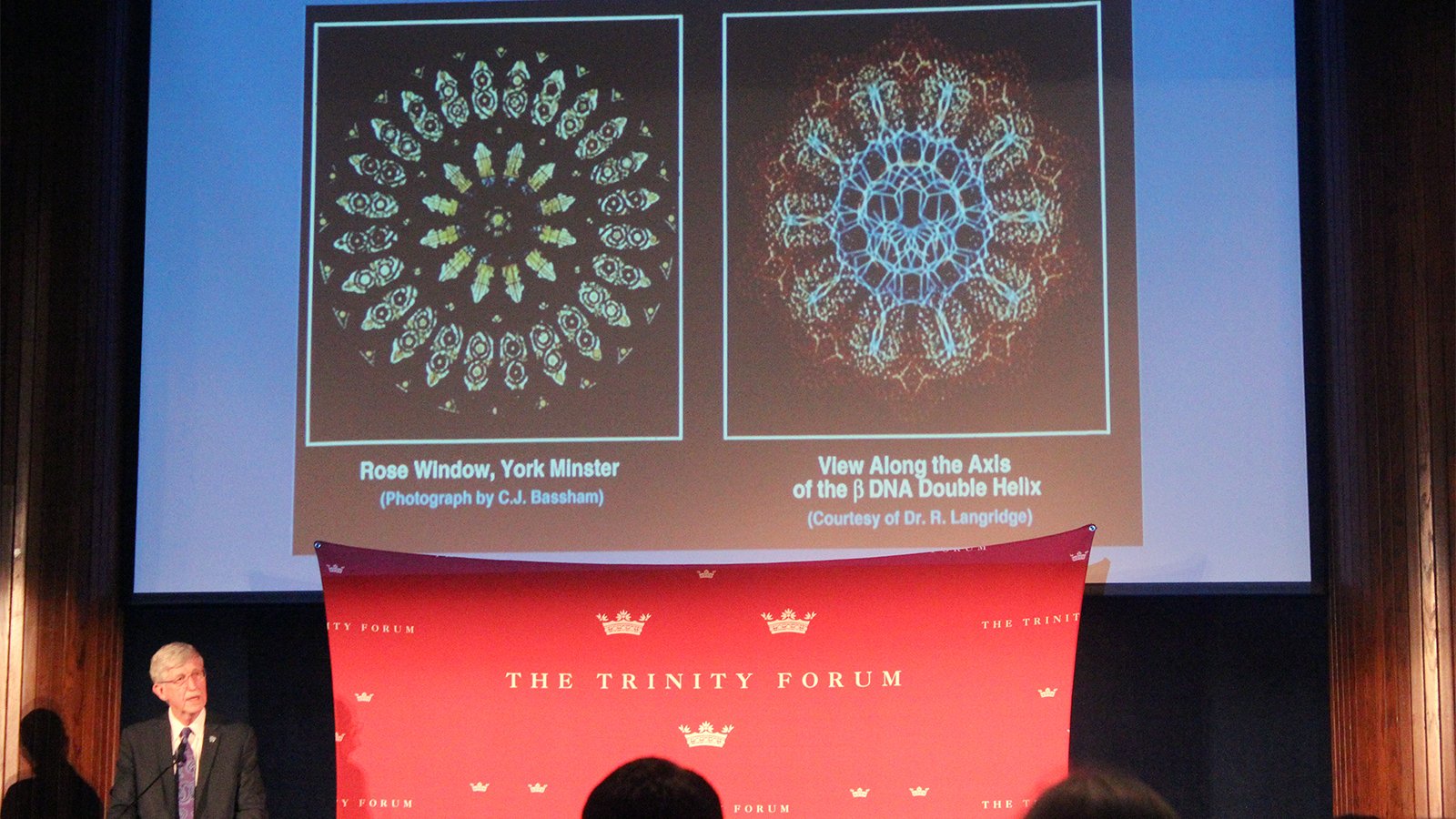 Francis Collins, bottom left, compares the beauty of a rose window, left, with DNA while speaking at the “Moving Beyond Conflict: Science and Faith in Harmony” event in Washington on June 18, 2018. RNS photo by Adelle M. Banks
June 19, 2018
Adelle M. Banks 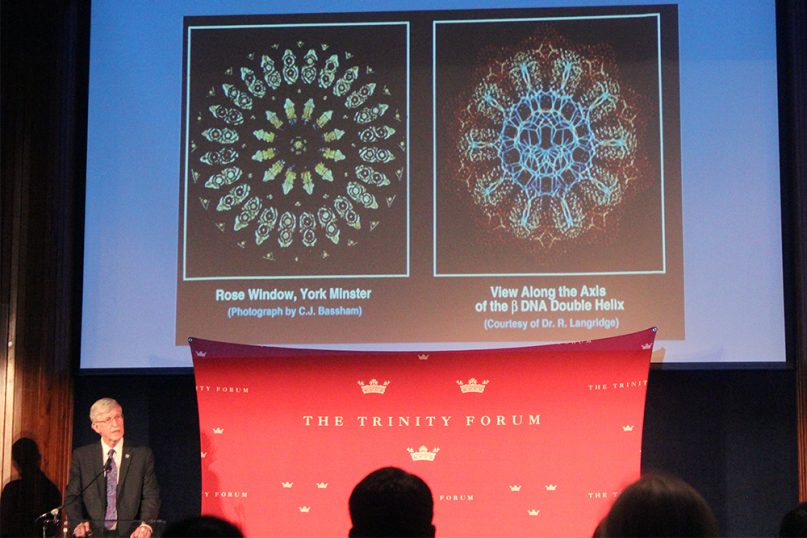 Francis Collins, bottom left, compares the beauty of a rose window, left, with DNA, right, while speaking at the “Moving Beyond Conflict: Science and Faith in Harmony” event in Washington on June 18, 2018. RNS photo by Adelle M. Banks

WASHINGTON (RNS) — To geneticist Francis Collins, a person’s DNA can be compared to the beauty of a Gothic cathedral’s rose window.

“I think that is a visual way to point out the beauty of what it is that God has given us as a creation,” Collins said as he stood below a screen at the National Press Club with two images side by side: the window of England’s York Minster and a view down the long axis of genetic material. “We ought not to miss that, even as we get excited about its practical consequences.”

The medical doctor who has directed the National Institutes of Health for almost a decade said he was speaking Monday (June 18) as a private citizen: “Tonight, I'm just Francis Collins.”

In a talk co-sponsored by organizations examining the intersection of faith and science, Collins told his audience of more than 300 about the wonder and the cautions that come with biotechnology. He also gave them a look inside his perspective as an atheist-turned-Christian.

“How do we feel about the opportunity to actually reinvent ourselves?” he asked. “Is this something we can embrace because it has great potential in medicine or is it something we should think a little more deeply about before we plunge in?”

The event, titled “Moving Beyond Conflict: Science and Faith in Harmony,” was the last in a series on “Discovery and Doxology” co-sponsored by the nonprofit Trinity Forum; BioLogos, a foundation Collins founded; Church of the Advent, an Anglican congregation in Washington; and Templeton Religion Trust. 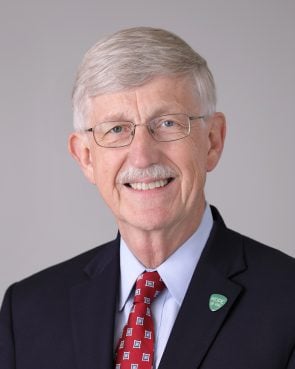 Francis Collins in 2017. Photo courtesy of National Institutes of Health

Collins, who is known for his leadership of the Human Genome Project, described how his work as a geneticist has led to advances in treating diseases, including cystic fibrosis, the most common genetic disease in the U.S. He said deciphering the “instruction book of a human being” has helped lead to more discoveries about treating inherited diseases and has improved health prospects for children. It's also shaped how he understands his work.

“For me as a believer, as well as a scientist, every time we discover something new, that is a moment of doxology,” he said, using the term for a hymn of praise to God. “That makes science also a form of worship. And it does feel that way to those of us who are believers.”

But he also cautioned that there are still unseen consequences to biotechnology, including germline editing that changes genetic material in ways that can affect future generations and could eventually lead to “designer babies.”

Collins said there is no international body to help determine important boundaries for this research. He urged people of faith to learn more about it so they can defend treatments that should go forward and question those that should not.

"If we’re really contemplating changing the human DNA, the germline, the consequences of this are profound,” Collins said. “And I’m going to argue this is not a line that we should be crossing right now.”

Collins displayed a chart in which "Designer babies with precisely predictable outcomes" was plotted as unacceptable and in a range of between 100 years and "never." The same chart predicted "drugs to treat morbid obesity" as acceptable and occurring within a decade. 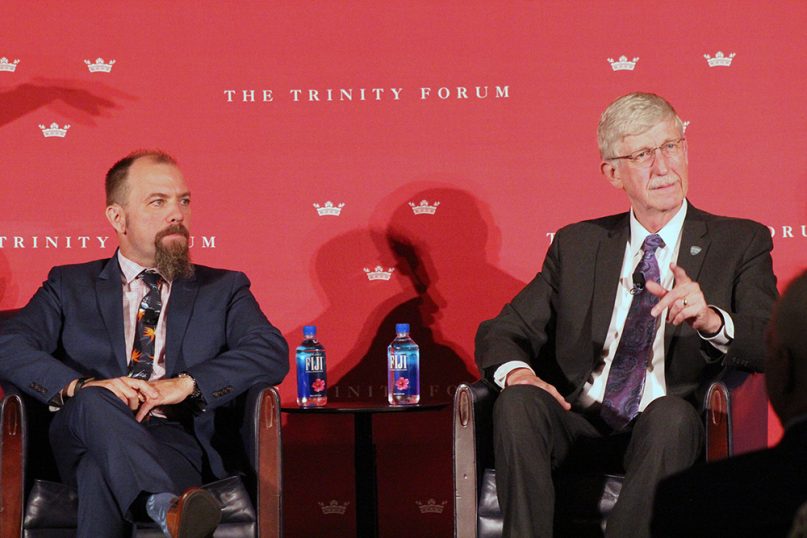 In a response to Collins’ remarks, James K.A. Smith, a Calvin College philosopher, agreed with the geneticist that the lack of an international group to address these issues is “worrisome.” He urged people of faith to speak up in the midst of that void.

“We actually need to speak publicly from the specificity of our religious understanding,” Smith told the audience in the press club’s ballroom, citing biblical stories of "unconditional dignity" and human interdependence. “On these matters, Jews, Christians and Muslims share so much in common about what we can testify to about the historic understanding of human nature.”

Collins said he has disproved naysayers who didn’t think he could combine his beliefs in faith and science.

“We are not just detective people who are trying to uncover answers to questions,” he said of Christian scientists like himself. “We are also exploring God’s creation and learning about it and its elegance in a way that increases our awe day by day.”

(This story was written with support from a Templeton Foundation grant.)