LOS ANGELES (RNS) — Alison Le sees a little boy running down a cobblestone street lined with brick buildings. She somehow knows he gets into trouble a lot. He’s lonely. He’s an orphan.

That little boy is Le, but not in this life. In this lifetime, Le is a 31-year-old woman living in Los Angeles.

Le is part of a Meetup group for past life regression, one of nearly 70 such gatherings available in and around Los Angeles for anyone who wants to take a hypnosis-aided trip into his or her previous existence.

In past life regression, participants view what they believe are memories from their past lives or incarnations. The practice is more than a century old and saw its biggest boom in the United States in the 1970s and early 1980s.

More closely related to the field of psychology than religion, practitioners nonetheless spend much of their time discussing the soul. With a strong spiritual-not-religious sentiment among young urbanites, the practice is gaining steam around Los Angeles.

Jeroen de Wit, who leads a past life regression group in Hollywood, points to a benefit for young people who reject traditional religious beliefs about life after death: understanding past lives, he said, makes death feel less permanent.

Not long ago, Le heard about a Meetup group in Anaheim a few miles from Disneyland and traveled two hours to attend.

At BOTI Studios, a wellness center in a low-slung building on a busy thoroughfare, participants enter a dimly lit room set up with reclining chairs and meditation pillows.

The group’s leader, Karuna Chinchkhede, 47, begins by explaining how hypnosis works — it feels like that moment just before you fall asleep, she says — and explains what past life regression is. Then she instructs the attendees to focus on their breathing and her words.

Chinchkhede starts small, asking Le and the other participants to imagine activities such as walking down a hallway. Eventually, she asks them to imagine opening a door where they are now standing in a past life. Then she asks them to look around. “Is anyone with you or are you alone?”

She guides them through situations from daily life such as eating meals, asking the same questions each time, until she asks about their death and what they did in their final moments.

The participants don’t answer out loud. They simply mentally follow their past lives in each scenario, hoping to get a more complete look at those lives.

An engineer by day, Chinchkhede said she always wanted to help people but wasn’t sure how until she learned about past life regression.

Chinchkhede said she was a tree, a cliff and a dust particle in three former lives.

“Everything has consciousness,” she said. “Some things we really can’t explain with the very logical, rational mind. Maybe the reason lies somewhere else that we don’t even know.”

Chinchkhede’s description may sound like past life regression is associated with Asian religious doctrines about reincarnation, but it is strictly a Western phenomenon, said Courtney Bender, a religion professor at Columbia University.

“There’s an enormous variety of interest in reincarnation starting in the 19th century among American liberals, what we now call spiritually religious people,” Bender said. 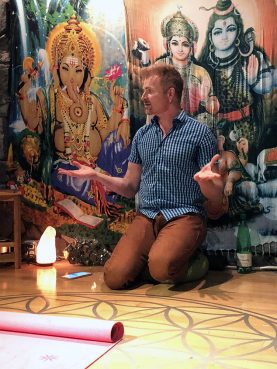 Freudian psychoanalysis fed the notion that we could be enlightened by hidden memories of childhood. Bender thinks past life regression mirrors “the excitement that people had about healing themselves through knowing their past.”

“There’s so much we don’t know about our souls and our ability to heal ourselves,” said
Patricia S. McGivern, a hypnotist who has specialized in past life regression for two decades.

McGivern became interested in past life regression some years after she miscarried, she said, when she heard her unborn baby talking to her. She discovered other women with similar stories. She wrote about the topic in her 2009 book, “Angel Babies.”

McGivern came to believe that the baby was an incarnation of her father’s soul.

“We’re all souls choosing to come into this incarnation,” she said. As the soul of her fetus, she said, her father “chose not to come because it would propel me on my spiritual path.”

Revelations like that, McGivern said, are why past life regression can be such an emotional experience. “If I see people cry I often encourage them because I see it as ancient tears,” McGivern said.

Bender said that during past life regression, people often find the souls of someone they know in their current life. “It’s a way to sort of supercharge everyday relationships with acquaintances who you want to have some sort of intimacy with,” Bender said.

But how reliable are the memories conjured during past life regression?

Jim Tucker, director of the Division of Perceptual Studies at the University of Virginia School of Medicine, said researchers have found 2,500 worldwide cases, mostly from regions where reincarnation is a common religious belief, that are worthy of study.

Before the division’s researchers consider a case to be authentic, they verify names, places, facts and dates from a past life memory. And every case must come from a child.

“We focus on the children because adults have had a lot of opportunity to learn things” that could pollute their memories, Tucker said.

Tucker said many cases share a common theme of a person dying violently or unnaturally in a previous life. “There is something that has continued on after the previous person died and appears present in the child,” Tucker said. “There does seem to be this continuation taking place.”

“They do contribute evidence that there can be this continuation of consciousness after a person dies, and with that is an important question that all of us consider,” Tucker said.

Tucker said, however, that his division never relies on hypnosis, as the visions it induces are unreliable.

Calvin Banyan, 62, is a board-certified hypnotist and CEO at the Banyan Hypnosis Center in Plano, Texas. He has seen clients regress into a past life while under hypnosis, but believes a hypnotist shouldn’t purposely take a client there.

When patients are led to a past life to fix a problem in this one and there isn’t anything there, he said, the subconscious will try to make something up to “fill in the blanks.” Instead, Banyan said, people should work on their issues in this life.

Not everyone is convinced that past lives are worth looking into.

The American Psychiatric Association (APA) doesn’t have an official statement on past life regression, but a former APA medical director called the practice “pure quackery.”

“During this mental state, the hypnotized person is vulnerable to get false memories from the hypnotist,” Andrade said, and these false memories can traumatize a person. Past life regression and its association with reincarnation veer too closely into religion.

“Doctors are entitled to their private religious beliefs, but they should keep them out of their medical practice,” he said.

For Le, the experience wasn’t an attempt to fix a problem in this life or about religion or medicine. Instead, she said, she was curious about opening doors she didn’t know were there. “I do want to try more, whatever the next step is.”