WASHINGTON (RNS) — Vice President Mike Pence used a State Department summit of foreign ministers and religious leaders to call on Turkey to release U.S. pastor Andrew Brunson and threatened the country with sanctions if it did not.

“If Turkey does not take immediate action to free this innocent man of faith and send him home to America, the United States will impose significant sanctions on Turkey until Pastor Andrew Brunson is free,” said the vice president on Thursday (July 26), the day after the North Carolina clergyman was released from jail and placed under house arrest.

Turkey’s official Anadolu news agency said Brunson was allowed to leave jail after 1 1/2 years because of “health problems.” The 50-year-old has lived in Turkey for 23 years and has served as pastor of Izmir Resurrection Church.

Pence asked “believers across America” to pray for Brunson, who has been charged with “dividing and separating” the majority-Muslim country as he spread his Christian faith.

“To President Erdogan and the Turkish government, I have a message on behalf of the president of the United States of America: Release Pastor Andrew Brunson now or be prepared to face the consequences.”

Pence’s remarks about Brunson drew several rounds of applause, along with a “Whoo!” from someone in the audience. Ralph Reed, one of several informal evangelical advisers to President Trump in attendance, stood and applauded. 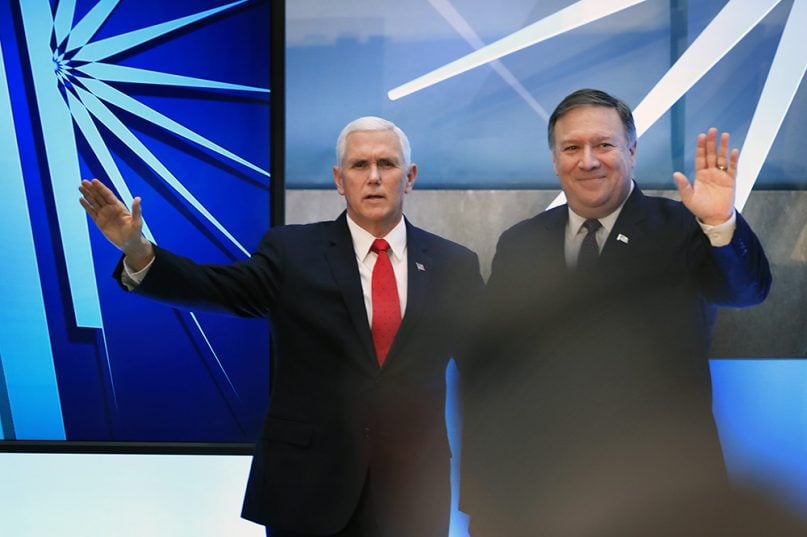 Vice President Mike Pence, left, and Secretary of State Mike Pompeo wave after Pence’s speech at the close of a three-day conference on religious freedom at the State Department in Washington, on July 26, 2018. (AP Photo/Manuel Balce Ceneta)

Turkey’s foreign minister responded in a tweet: “We will never tolerate threats from anybody. Rule of law is for everyone; no exception.”

Turkey did not send representatives to the three-day ministerial, which concludes Thursday and drew some 350 government officials, religious freedom advocates and others from more than 80 nations.

The Ministerial to Advance Religious Freedom, billed as a first-ever gathering of its kind at the State Department, aimed to develop “concrete ways” to reduce religious persecution across the globe, according to its organizers. Among the victims of religious persecution and their relatives who spoke at the summit were Brunson’s daughter Jacqueline Furnari and a Uighur Muslim who has moved from China to the U.S. to leave a region where his people are “living in horror.”

Pence, who spoke for more than half an hour, said that 83 percent of the world’s population live in a nation where some religious practice or belief is banned or threatened.

He cited the Nicaraguan government of President Daniel Ortega “virtually waging war on the Catholic Church,” the torture of Tibetan Buddhists in China, forced abortions and the outlawing of the Christian Bible in North Korea, and Russia’s imprisonment of Jehovah’s Witnesses.

Pence noted that some free societies, such as those in Europe, are also sites of religious intolerance.

“Just 70 years after the Holocaust, attacks on Jews, even on aging Holocaust survivors, are growing at an alarming rate,” the vice president said.

Pence, along with Secretary of State Mike Pompeo, listed several new initiatives to continue the goals of the summit, which will become an annual event. 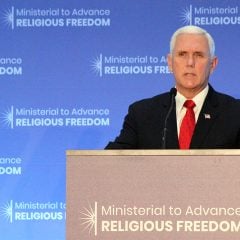 Vice President Mike Pence addresses the final day of the Ministerial to Advance Religious Freedom at the State Department in Washington on July 26, 2018. RNS photo by Adelle M. Banks 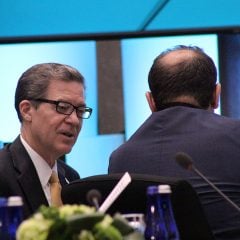 U.S. Ambassador-at-Large for International Religious Freedom Sam Brownback visits with attendees at the Ministerial to Advance Religious Freedom at the State Department in Washington on July 26, 2018. RNS photo by Adelle M. Banks 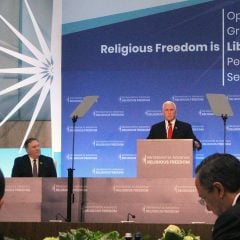 Vice President Mike Pence speaks during the final day of the Ministerial to Advance Religious Freedom at the State Department in Washington on July 26, 2018. RNS photo by Adelle M. Banks Secretary of State Mike Pompeo addresses the Ministerial to Advance Religious Freedom at the State Department in Washington on July 26, 2018. RNS photo by Adelle M. Banks

Pence said the U.S. is launching a Genocide Recovery and Persecution Response Program, under which the State Department and the U.S. Agency for International Development will help persecuted individuals and households.

“Americas will help the victims of ISIS reclaim their lands, rebuild their lives, and replant their roots in their ancient homelands, so that all religions can flourish once again across the Middle East and the ancient world,” he said, drawing applause.

Pompeo, who introduced Pence, also addressed the rebuilding of religious communities in Iraq that have been devastated by the so-called Islamic State, also known as ISIS. He said his department will provide an additional $17 million to help remove land mines from the area around the Iraqi city of Nineveh, adding to the $90 million already spent in the country this year.

Other initiatives include a leadership program that would bring those on the “front lines of religious freedom issues” to the United States; a workshop, planned for October, to support private/public partnerships defending religious freedom; and regional conferences to the summit in several countries.

Pence also announced a new International Religious Freedom Fund to assist persecuted religious minorities, and he asked other nations to join the United States in supporting it. A ministerial document describing the fund said the U.S. government would cover its personnel and administrative expenses, leaving all other donations for activities such as awareness campaigns and initiatives for conflict prevention.

Both Pence and Pompeo reflected on their own faith as they repeatedly pledged the administration would be committed to the rights of people of all faiths.

“My own faith is of the greatest importance to me personally,” said Pompeo. “As an American, I’ve been blessed with the right to live out what I believe without fear of persecution or reprisal from my government. I want everyone else to enjoy this blessing too.”

He added: “The United States advances religious freedom in our foreign policy because it is not exclusively an American right. It is a God-given universal right bestowed on all of mankind.”

Pence concluded his remarks by pointing out that a verse from the Book of Leviticus from the Hebrew Bible – “Proclaim liberty throughout all the land, and unto (all) the inhabitants thereof” — is carved into the Liberty Bell.

“As the Bible tells us, ‘Where the spirit of the Lord is, there is liberty,’” the vice president said. “So freedom always wins when faith in him is held high.”