OKLAHOMA CITY (RNS) — On a recent weekend, Pamela Jennings brought her 7-year-old granddaughter, Amara, and 4-year-old grandson, Trend, to People’s Church, an evangelical congregation. But though Jennings is a Christian, the family didn’t come for worship.

Instead, they were drawn by the church’s Day of Hope — an annual Saturday event where volunteers give away 3,200 backpacks filled with school supplies and offer free services such as medical exams and haircuts.

“It’s just awesome because some people really can’t afford to get school supplies or get a haircut,” Jennings said. “This is a real blessing for a lot of people.”

From the National Council of Jewish Women in Southfield, Mich., to the Islamic Center of Northridge, Calif., religious groups nationwide organize back-to-school events in the late summer and early fall to serve needy families. 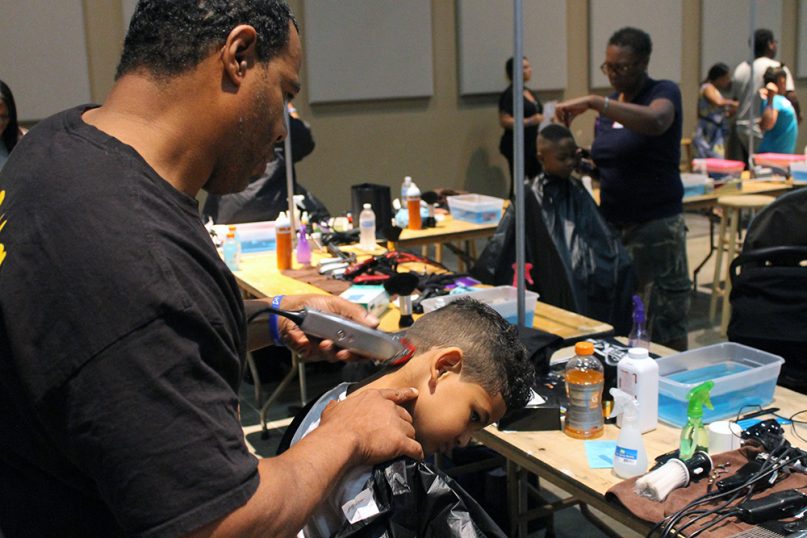 Christy Watson, communications director for the Oklahoma State School Boards Association, said she has noticed a definite uptick in engagement between houses of worship and public schools throughout Oklahoma. Since much of the activity occurs at the grassroots level, though, it’s difficult to quantify, Watson said.

Houses of worship and schools “are both places people turn to and gather at in times of celebration and need,” she said. “So it makes a lot of sense that they would join forces to serve their communities.”

Emmaus Baptist Church, in the Oklahoma City suburb of Moore, has received the award. The Southern Baptist congregation not only buys school supplies and provides mentors for students, Watson noted. It also served as a temporary school location for an entire year after a tornado devastated the community.

“I don’t have any baseline data, so I’m reluctant to claim there is a trend of any sort,” said Lallie Lloyd, director of All Our Children, a national network that promotes church-school partnerships as a way to address social justice. “However, our organization was formed because we noticed that these ministries were emerging.”

Lloyd, whose organization is affiliated with the Episcopal Church, said church-school partnerships typically have two purposes. “One is to provide direct services to the children … and that’s where the school supplies would come in,” she said.

“But the second purpose, and really the motivating aspiration and dream behind All Our Children, is taking a more systemic approach to the realities of educational inequity.” 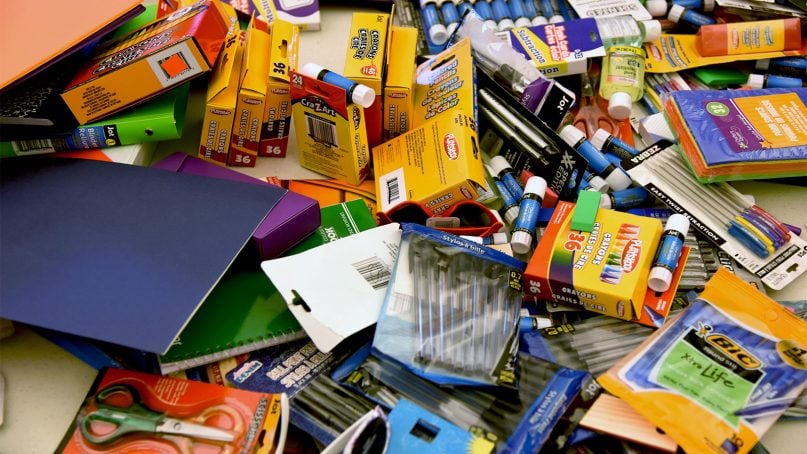 According to the National Retail Federation, families with children in elementary through high school will spend an average of $684.79 on back-to-school shopping this year.

But for the poor, buying crayons and pencils, much less shoes and jackets, can be a major financial burden, which has inspired many houses of worship nationwide to get involved, said leaders of faith groups doing back-to-school work.

“Islam teaches that you cannot just sleep at night if your neighbor is hungry next door,” said Shahid Farooqi, national coordinator for Islamic Circle of North America’s back-to-school drive. That principle applies to children who need school supplies, Farooqi said.

This year, the ICNA drive is distributing 50,000 backpacks in 34 states. Both numbers have increased every year since the project’s launch six years ago, he said. The Northridge, Calif., mosque is among the participants.

Sandi Matz, co-president of the National Council of Jewish Women in Southfield, Mich., said her organization aims to help women, children and families.

Before school starts, the group will welcome 600 Detroit schoolchildren to a shopping spree, Matz said. “They will come and shop — but they don’t pay — for a complete set of clothing, jacket, hats, mittens, pants, shirt, shoes, underwear and a backpack that will be filled with supplies and a book.”

Some of the children never have owned a new pair of socks and light up at how soft they feel, she said, “just like you gave them the biggest candy bar in the world.” 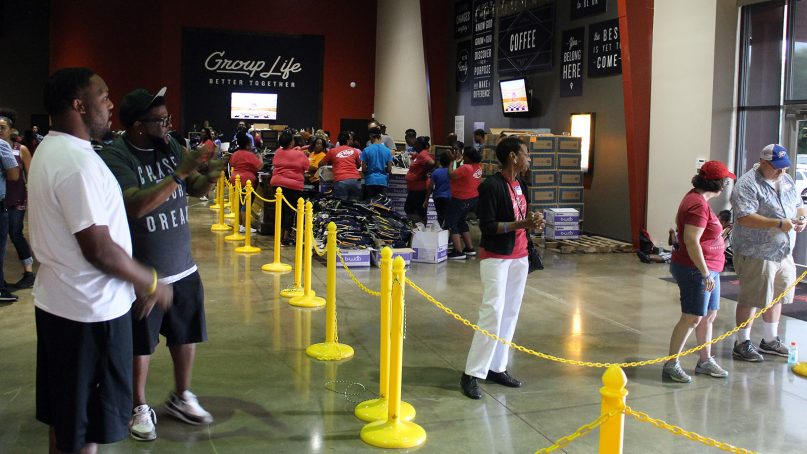 Volunteers greet guests at People’s Church in Oklahoma City during the church’s “Day of Hope” event on July 28, 2018. School supplies, haircuts, medical exams, entertainment and more were available for free at the event. RNS photo by Bobby Ross Jr.

Andy Wynn, People’s Church’s director of communications, said it’s easy to forget how costly a new school year can be.

“You’ve got to get new clothes for your kids. You’ve got to get school supplies, immunizations, haircuts, shoes and things of that nature,” Wynn said. “So when you multiply that across having four or five kids, and maybe being a single parent and having only one job, it can really add up to where it’s not possible.”

“It’s just another part of being part of the community … and just showing the love of Christ,” Wynn said.

At Day of Hope, bounce houses and “Veggie Tales” screenings on big screens welcomed children and parents. Volunteers wore bright red T-shirts with the message “How may I serve you?” on the front.

Thompson said she was motivated to volunteer “by that one smile, that one parent that’s struggling, that one kid that any other day wouldn’t be able to have any type of supplies.”

A fellow volunteer, La Keena Carter, agreed. “The community needs to know the church is there for them, no matter what the situation, that there’s always going to be an open door.”