As people take their seats, the band’s thundering bass bounces off the walls, a fog machine spews smokelike vapors and previews of coming youth events and special guest appearances flash on the auditorium’s three screens.

As the nondenominational service concludes, hundreds of people stream outdoors. Kids twirl hula hoops and toddlers play a parachute game in the fading late-summer light. Adults line up at the edge of the parking lot for food trucks dishing out burgers, hot dogs and tacos.

This dynamic megachurch is similar to many others across the country, except for this: 70 percent of church members are military families based at Fort Bragg, the nation’s largest military installation. And despite a rapid turnover of members, due to deployments, retirements and transfers to other bases, the evangelical church has not only held steady, but grown. There are 3.5 million military personnel in all branches of the armed forces. Of those about 1.2 million are active duty and about 40 percent of those identify as evangelical.  At a time when many churches are struggling to hold on to members and millennials express a flagging faith, the founder of Manna Church, Senior Pastor Michael Fletcher, thinks he has found a way to keep many of those young military families by building a church home for them wherever they go.

Over the past three years the church has grown from its flagship Fayetteville location to eight churches serving mostly military families across the country. They include one in Colorado Springs, Colo. (near Fort Carson); another in Niceville, Fla. (near Eglin Air Force Base); as well as outposts in Newport News, Va. (Langley Air Force Base, Fort Eustis and others); and Honolulu (multiple bases).

In each new location, it has relied, to a large extent, on a core group of soldiers who had attended the flagship North Carolina church and are able to carry the congregation’s culture to their new assignments on other bases.

Now Manna Church has set an ambitious goal: to open a campus in every city with a large military base. 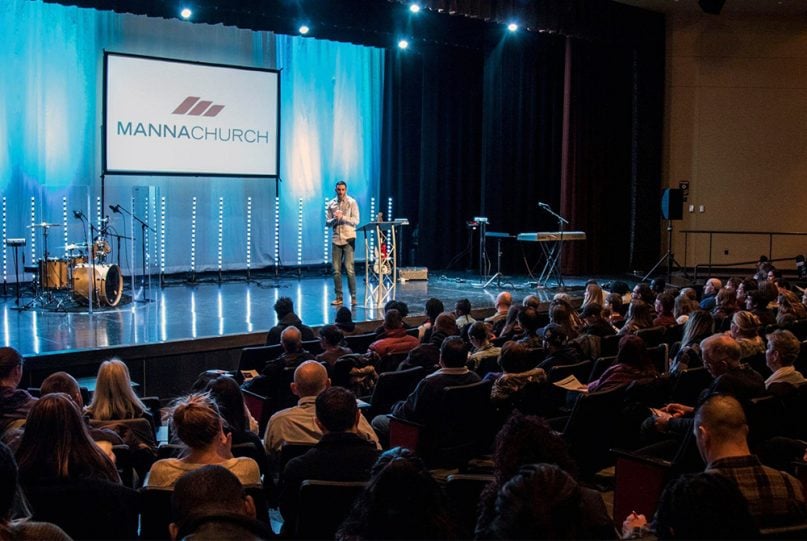 The Colorado Springs outpost has the same name, logo and vision statement as the mother church and it tries to develop the same culture. After launching in a community college auditorium in January, Adams had 469 people attending Sunday services by the end of July — an impressive start in a town with no dearth of evangelical churches.

That goal of opening new churches along what Fletcher calls “the military highway” took shape three years ago when he reviewed a report showing the church had lost 1,143 people to transfers and retirements that summer. To stay even, the church would have to add 1,143 new members before the year was out.

“Out of my mouth came these words: ‘I am tired of sending people from us to nowhere. So I’m going to plant a version of Manna Church near every U.S. military base in the world,’” Fletcher said. “As soon as I said that, I realized, ‘Well, that’s God’s plan for us.’”

Fletcher has led the church for three decades — taking a group of 350 that had formed out of a Bible study at a halfway house and boosting it to 9,300 members in eight locations (two-thirds in Fayetteville). Along the way, he’s learned something about church growth.

In a book he wrote about leadership, he argues the key to a thriving church is offering people a set of easily understandable steps to help them develop as believers and as church leaders. Fletcher’s method, which he calls “the growth track”  calls for putting new believers through a series of three small group classes he calls First Step, Next Step and Leader Step.

Those steps may help Manna in replicating its success elsewhere.

Staff Sgt. William Reinier, a public affairs specialist who was transferred from Fort Bragg to Fort Carson last year, said he was comforted by knowing he could find a church home in a congregation he already knew. 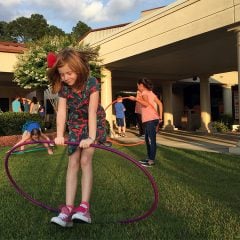 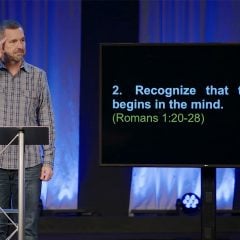 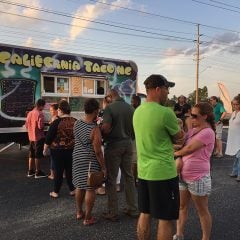 Food trucks are one of the attractions for congregants after Thursday evenings services at Manna Church in Fayetteville, N.C. RNS photo by Yonat Shimron

When he found out Manna Church was starting a new plant in Colorado, he saw it as a sign.

“It just really felt like God saying, ‘Hey. I’m sending you to Colorado Springs for this reason: It’s time for you to get involved and take the next step and grow more as a Christian,” he said.

Other churches across the country have also developed a niche competency; some also cater to military families, but Manna has taken it further.

“They understand the mindset of service people and their families very well,” said Dave Travis, senior consultant at the Leadership Network, a think tank and consulting firm for large churches. “They benefit from positive word of mouth because of people who came through there and are now deployed elsewhere, whether in Germany or Afghanistan. They say, ‘Here’s a place that gets military people.’”

Diana Juergens joined the church in 2005 when she and her husband, a soldier, returned to the States, from an assignment in South Korea. Within a month, she had formed a support group for soldiers’ wives in her Fayetteville home. When the group topped 18, she called Manna Church and asked if it could meet there.

“Manna immediately said yes,” said Juergens. “My Wives of Warriors group that started in my home has been going on for 13 years. That’s a prime example of how they support the military family.”

Juergens’ is one of 381 such small groups at the Fayetteville church alone. The church encourages people with a particular interest to form groups to help one another grow in their faith. There are small groups devoted to building decks, shooting guns, reading books, and feeding the homeless.

“Our job is to help people become who God called them to be, not just harness them as resources to build the church,” said Fletcher.

Melissa Holcomb, the wife of a soldier who attended a Thursday night service in Fayetteville recently, said other churches tend to form cliques that aren’t always welcoming to military families. “They don’t understand you’re not putting down roots there,” she said.

“My husband is career military,” Holcomb said. “We’re not going to be here forever. It’s nice to know there’s a high probability we’ll find a Manna Church someplace else.” 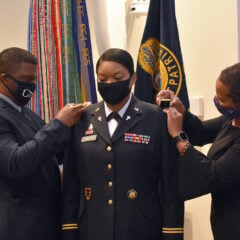