But sometimes you have to let your light shine, said the Rev. Susan Hendershot Guy, president of Interfaith Power & Light.

For California faith communities, that means taking a public role in the Global Climate Action Summit in San Francisco this week (Sept. 12-14), offering an interfaith service and faith-based workshops among other events. 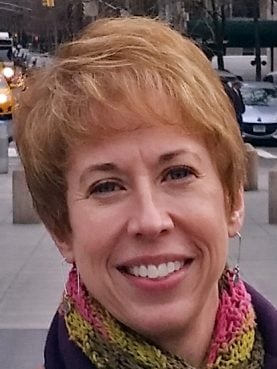 The three-day summit, co-chaired by Gov. Jerry Brown and former New York City Mayor Michael Bloomberg, has drawn international and local government, business, science and nonprofit leaders. Hendershot Guy said it is important for the faith community to show up as well.

The summit has been a chance for these congregations to raise the profile of their faith efforts. At the multifaith service, at the Episcopal Grace Cathedral in San Francisco, the Dalai Lama is expected to speak via video, and Christiana Figueres, who served as executive secretary of the U.N. Framework Convention on Climate Change, will speak in person.

“There are a lot of people beginning to connect the dots between faith, the environment, climate change,” said the Rev. Ambrose Carroll, co-founder of Green the Church, a campaign to motivate environmental action in the African-American church community.

For many congregations, the environmental focus is nothing new. Many local houses of worship have community gardens or encourage members to write letters to the editor of their local newspaper. An Interfaith Power & Light program called Cool Congregations helps congregations reduce their carbon footprint while saving money.

Some faith leaders have taken time to call or meet with local policy makers — an important step, said Hendershot Guy. “We can all change a light bulb,” she said. “But at the end of the day we need the right policies in place in order to get where we need to go as quickly as we need to get there.”

Recently a number of faith-based organizations backed a new California law, signed by Brown this week, that requires the state to get all its power from renewable sources by 2045. 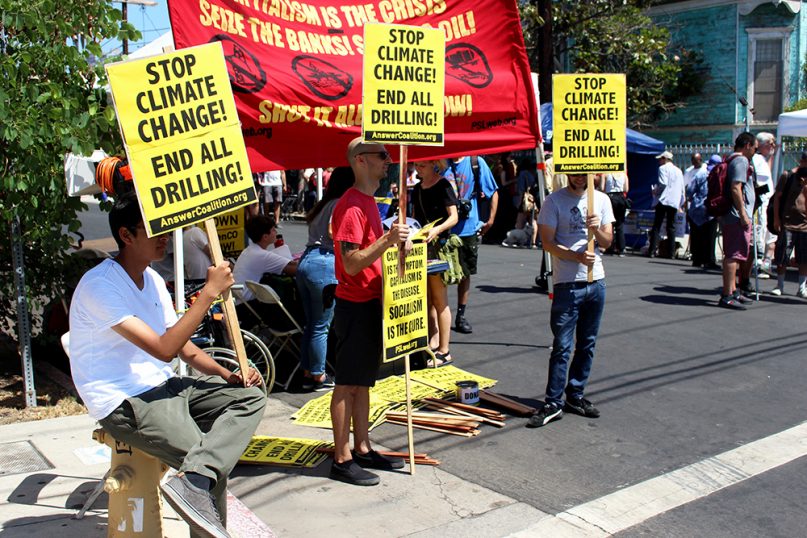 Attendees hold signs and banners during the Rise L.A. for Climate, Jobs and Justice Rally in the University Park neighborhood of Los Angeles on Sept. 8, 2018. RNS photo by Heather Adams

Bishop Marc Andrus of the Episcopal Diocese of California said his denomination has been working on corporate and individual action. The Episcopal Church remains committed to the Paris climate accord, even though President Trump pulled the U.S. out of the agreement. The denomination has also passed a number of resolutions focused on creation care.

The resolutions include encouraging churches to serve and promote locally grown food, promoting energy and water efficiency and advocating for ocean health through public policy advocacy.

Keeping those resolutions, Andrus said, is easier said than done, which is why the church is helping create an app to assist people with keeping their commitments.

The app, Sustaining Earth, Our Island Home, will help people make five changes in their life and then tracks their progress. The app is expected to go live in January. 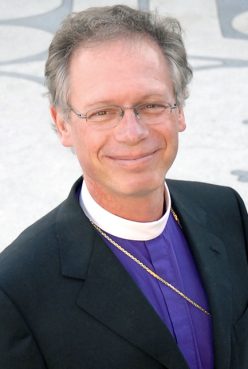 Kristin Barker, co-founder of One Earth Sangha, which brings practices from the Buddhist tradition to ecological issues, said it’s important to personally commit to the Paris agreement and not wait for the government to enforce regulations.

But she also acknowledges the difficulties of living a sustainable life and wants others to feel they can acknowledge it too.

“This is hard. It takes me longer to get to work when I have to take a bus. Or, I really miss eating hamburgers,” she said.

Andrus said many faith-based groups are working on sustainability and environmental justice is very large. But they seem to be flying under the radar.

Both Andrus and Hendershot Guy are working to organize and support these communities through interfaith events at the summit.

“It’s one planet and it’s one people,” Andrus said. “We inspire each other, we learn from each other.”

Lately some faith groups in California have found themselves at odds when it comes to environmental issues.

A local environmental coalition called STAND-LA — which includes faith-based groups — is working to shut down the the Murphy oil drilling site in Los Angeles, arguing that its wells pose a danger to the community. It is one of two such sites located on property owned by the Archdiocese of Los Angeles. The Rev. Kelvin Sauls speaks at the Rise L.A. for Climate, Jobs and Justice Rally in the University Park neighborhood of Los Angeles on Sept. 8, 2018. RNS photo by Heather Adams

The land was donated to the archdiocese in the 1950s by descendants of Edward L. Doheny, one of Los Angeles’ early oil barons, according to the Los Angeles Times. AllenCo Energy bought the oil production facility on the site in 2009.

AllenCo voluntarily suspended oil production in 2013 after public opposition. An investigation led to more than $99,000 in fines, according to the Times.

The site has remained closed. But AllenCo officials have discussed reopening it.

STAND-LA and other south LA residents want the diocese to help shut the site down permanently. Last year, Sauls sent a letter to Archbishop José H. Gomez asking for a meeting. The letter cited Pope Francis’ encyclical on ecology.

“We also see it as a tremendous opportunity to transition to a more sustainable economy that will create jobs for local residents, income for local institutions, and ensure a healthy community for our children and future generations,” the letter read. “We believe the Los Angeles Archdiocese can play a transformational and catalytic role in this transition.”

Gabriela Garcia, who lives near the AllenCo drilling site, has been part of grassroots efforts for several years. She said the efforts came together when neighbors started asking one another about strange odors and whether their children were also getting nosebleeds.

She also spoke during a rally at the Murphy site on Saturday (Sept. 8). Acknowledging that the issue is complex, Garcia said nonetheless that the archdiocese has a responsibility to shut down the site.

“We know that that would be the best outcome for our community and for the health of our community,” Garcia said.

In an email statement, the archdiocese told Religion News Service that it “does not have the right to shut down the site.”

“That said we are working with the City and AllenCo to find an alternative use for the site that is in the best interest of the community, royalty holders and all other stake-holders,” the statement continued.

The rally also promoted legislation for a 2,500-foot buffer between extraction sites and homes, said Niki Wong, director of policy and organizing at Redeemer Community Partnership, a local faith group.

Wong knows these rallies can make a difference.

In August, the faith-based group learned the owners of a drill site on Jefferson Boulevard would be shutting that facility down in the face of neighborhood opposition.

Now the nonprofit is working to make sure the closure and cleanup are done in a timely manner and that it isn’t left as an “orphan well,” abandoned by the company.

Then, she said, it’ll be up to the community to decide what to do with the land next. She’s heard people talking about a skate park, library or park.

“Right now this site is awful. It’s a facility that repels people from their homes,” Wong said. “It’d be so beautiful to see it transform into a park that gathers people together.”