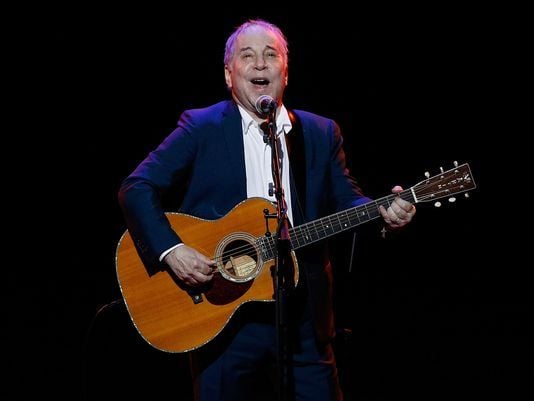 For the last more than fifty years, my rock rabbi has been Paul Simon.

I fell in love with Paul Simon’s music, with the music of Simon and Garfunkel, when I was ten years old. His music shaped and defined my world – almost as much as Judaism itself. We saw him two weeks ago, on his Homeward Bound tour. At the age of 77, he is retiring from touring. He deserves it.

Let me share one of his recent songs with you -- Paul Simon's Yom Kippur sermon.

The song is called “Rewrite.”

I've been working on my rewrite, that's right

Gonna throw away my title

And toss it in the trash

Every minute after midnight

All the time I'm spending

It's just for working on my rewrite

Gonna turn it into cash.

I've been working at the carwash

I consider it my day job

Cause it's really not a pay job

But that's where I am.

Everybody says the old guy working at the carwash

Hasn't got a brain cell left since Vietnam

That you were there

Thank you, for listening to my prayer

Where the father has a breakdown

And he has to leave the family

But he really meant no harm

And a race across the rooftops

When the father saves the children

And he holds them in his arms

That you were there

Thank you, for listening to my prayer

Paul Simon is singing about a man who understands the insight of the psychoanalyst Adam Phillips.  “Adulthood,” he writes, “is when it begins to occur to you that you may not be leading a charmed life.”

The man in “Rewrite” did not live a charmed life. If he had great dreams, he left them somewhere in a rice paddy in southeast Asia. He returned from the war, broken and shattered.

He’s working in a car wash. His customers can only cluck their tongues and whisper about the guy who lost it in the war, the old guy who hasn’t had a brain cell left since Viet Nam.

Someone once said that dreams don't make noise when they die. No, they don't have to. But, they die nonetheless.

The man in the song can imagine a more heroic way of having lived.

He imagines a car chase. He imagines saving his children from some unseen or unknown disaster or danger, and fleeing with them in his arms across the rooftops.

The man in the song wants to re-write his book of life, his sefer chayim. In the song’s chorus, he turns to God and almost in the voice of the ancient Psalmist, the man says: I have experienced my life as being one massive void, a spiritual vacuum. But in the process of even wanting to re-write my book of life, I found You.

Once upon a time, the man believed that real heroism was to be Bruce Willis and to become an action hero.

Even before you work on your re-write, you have to open the book that you already have -- and you have to interpret it.

A man named David Lilov is about to die, and his friends gather around and they ask him, “David, when the righteous die, in the world to come they study a holy text in a seminar where God is the teacher.

“What book, what holy text will you study in the world to come?”

This is what David Lilov said:

“I do not expect to study the Torah or the Talmud. The book that I will wind up studying for eternity will be Sefer David Lilov – the Book of David Lilov."

Our sages say that when you study Torah, there are seventy facets of Torah -- seventy ways that people can interpret the Torah.

Because each of us is a Torah in miniature, then it is possible that we can each interpret our own lives seventy ways.

Each of us is a sacred text that cries out, as ancient holy texts would cry out: Darsheini! Interpret me.

The last rebbe of the Warsaw Ghetto was Rabbi Kalonymous Kalman Shapira.

Seventy seven years ago, on Rosh Ha Shanah, 1941, just two weeks before Paul Simon was born in Newark, New Jersey – Rabbi Shapira spoke these words in the secret synagogue in the Warsaw ghetto.

The worst Jewish denial of faith is the heresy of saying that what is, is; that it is impossible to work on your rewrite.

I’m working on my rewrite, that’s right. How about you?