RALEIGH, N.C. (RNS) — In the end, it didn’t matter much what the bishop said during the Mass of Reparation and Prayer for Healing for victims of the sex abuse scandal.

His gesture said it all.

Standing in front of the altar Tuesday (Sept. 25) in Raleigh’s Holy Name of Jesus Cathedral, Bishop Luis Rafael Zarama took his violet zucchetto from his head and fell to his knees.

“I’d like all you who have been abused, who have been victims of this horrible crime, in the name of the church, I ask for forgiveness,” he said.

For the next 20 minutes, as he delivered his homily without notes in his heavily accented English — he is Colombian — Zarama was on his knees.

The Mass was one of many such healing services specifically tailored to address the clergy sex abuse crisis, which got new life last month after the Pennsylvania attorney general released the report on a two-year grand jury investigation into widespread sexual abuse and cover-up within six Catholic dioceses across that state.

The dioceses of Washington, D.C.; St. Louis; Seattle; St. Petersburg, Fla.; and Richmond, Va., are planning or have already held services focused on repentance and atonement.

In Washington — where Cardinal Donald Wuerl is facing allegations he improperly handled predator priests while serving in Pennsylvania — a “Season of Healing” is planned to extend for six weeks and beyond to “give voice to the pain and suffering of the survivors of clergy sexual abuse” and the church as a whole. 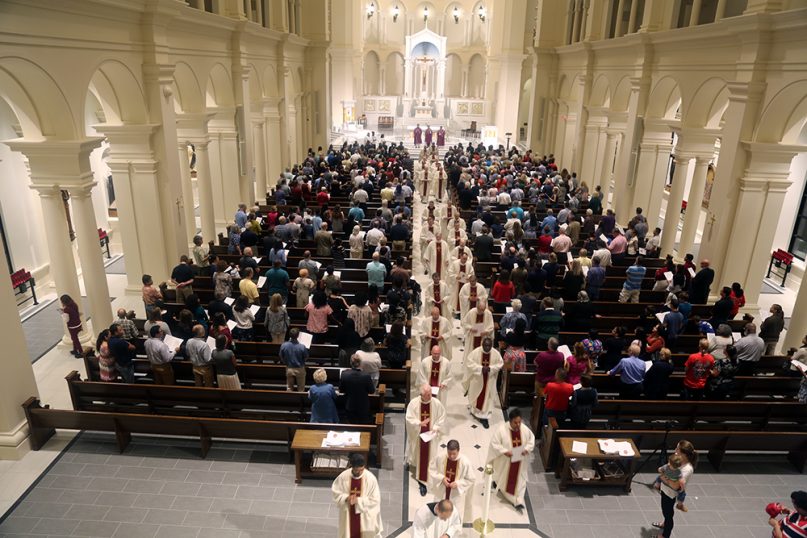 More than 30 priests participate in a Mass of Reparation and Prayer for Healing in Raleigh, N.C., on Sept. 25, 2018. Photo courtesy of Diocese of Raleigh

“For some of our parishes, it may be a Mass, while for others, it may be Holy Hour (Eucharistic adoration in the presence of the Blessed Sacrament) or perhaps a recitation of the rosary,” said Chieko Noguchi, director of media relations for the Archdiocese of Washington, in an email. “Each pastor was provided with resources to supplement the efforts that are already taking place in our parishes.”

In Pennsylvania, bishops announced they would support a fund to compensate victims, essentially paying people who are barred from pursuing civil claims because the statute of limitations has expired.

But in most other places, rituals of healing have been the typical response.

The Rev. Gary Dowsey, priest at Our Lady of Lourdes in Dunedin, Fla., recounted his church’s Stations of the Cross service — a traditional way to recount the story of Jesus Christ’s crucifixion — designed to address the abuse crisis.

When performing the first station, which recalls Pontius Pilate condemning Jesus to death, Dowsey said those gathered participated in a prayer that reflected on the experience of abuse victims.

“For some people, abuse is a life sentence — something they have to carry for the rest of your life,” he said. “It’s like being condemned, losing your own dignity and worth. If people looked the other way, if people don’t believe you, you’ve been unjustly sentenced in a sense.”

The reaction from the congregation, he said, was “very, very positive,” and he said they may have to perform it several times.

“We realized those who have been abused, the road to recovery and resurrection and recovery can be as difficult as the road to the cross,” he said.

In Raleigh, the service was carefully scripted, with clarion bells, a full choir and a long litany of supplications with the refrain: “Out of the depths, I cry to you, O Lord.”

Zarama and his entourage of priests wore purple vestments, the color of penitence, typically worn during Lenten season. 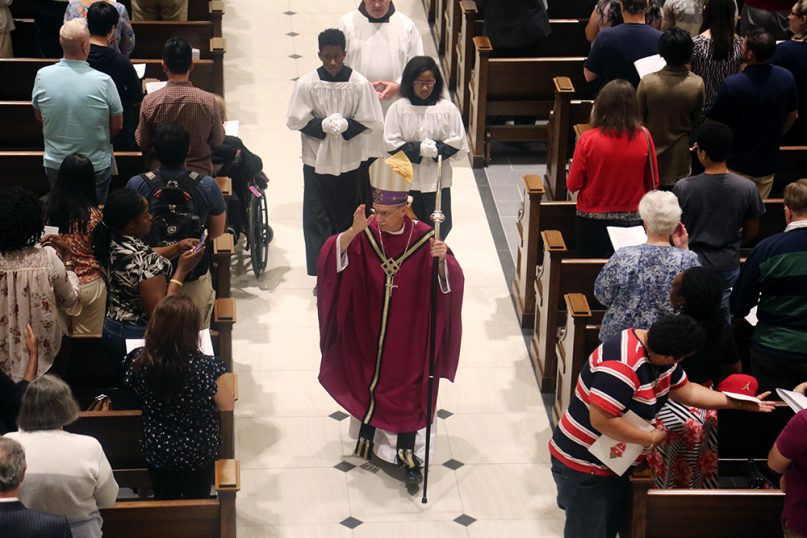 Bishop Luis Rafael Zarama at a Mass of Reparation and Prayer for Healing in Raleigh, N.C., on Sept. 25, 2018. Photo courtesy of Diocese of Raleigh

“I am very sorry,” Zarama said. “My heart is crying because I would like to have a magic touch to be able to heal your wounds. But the only thing I have to offer to you is praying together.”

Later, he personally served Communion to hundreds of worshippers who had flocked to the Romanesque Revival cathedral, though many of the 2,000 seats remained vacant.

Many of the 130 priests in Zamara’s 54-county diocese, which straddles eastern North Carolina, could not make it to Raleigh because of Hurricane Florence. About 30 priests walked in the procession ahead of the bishop.

Some abuse victims and their advocates discounted these rituals of healing, saying the cost of their horrific experiences — both spiritually and financially — will linger throughout their lives.

Certainly, the crisis is far from over. On the same day as the Raleigh Mass, a report was released about Germany’s Catholic Church that found 1,670 priests there abused more than 3,600 people.

But the North Carolina diocese, which counts 200,000 registered Catholics, and as many as 300,000 others, mostly Hispanic Catholics, who do not formally register, has had a low incidence of sexual abuse at the hands of priests. That’s mostly because until recently, the area has had one of the smallest populations of Catholics in the U.S. Worshippers at the Mass of Reparation and Prayer for Healing in Raleigh on Sept. 25, 2018. RNS photo by Yonat Shimron

“We have such good priests and consecrated lay people that do such good work,” said Jennifer McKinney of Raleigh, who attended Tuesday’s Mass.

Of the 300 priests named in the Pennsylvania grand jury report, two worked in the Raleigh Diocese during the 1970s and 1980s.

McKinney was among many who said they appreciated the diocese’s efforts to begin the healing process. “It’s going to take time,” she said. “It’s like a severe illness. It’s not going to heal overnight.”

Indeed, Zarama in his homily did not go into details about the scandal besides referring to those who “committed terrible crimes.” Neither did he point to the reasons for the scandal or the accountability measures that must be put into place to prevent such abuses from happening again.

Instead, he expressed his personal sorrow and implored his fellow Catholics to “let the love of Jesus come and touch your hearts.”

For most, that was enough. They said they saw the Mass as a first step and they appreciated the effort to bring Catholics together.

“It’s good for us as a church to come together and pray and ask for healing,” said Stephen Yates, who serves as a deacon at St. Thomas More Catholic Church in Chapel Hill. “It’s a reminder that we’re one body in Christ and where anyone is hurting we are united.” Raleigh’s Holy Name of Jesus Cathedral held a Mass of Reparation and Prayer for Healing on Sept. 25, 2018. RNS photo by Yonat Shimron