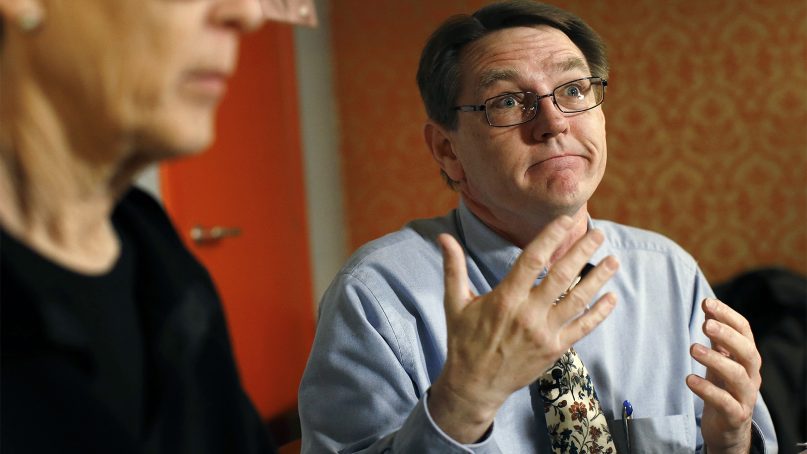 David Clohessy during a news conference in Rome on March 6, 2013. Photo by Tony Gentile/Reuters

ST. LOUIS (RNS) — David Clohessy, a longtime leader with Survivors Network of those Abused by Priests, known as SNAP, stood on a sidewalk near the Cathedral Basilica of St. Louis and told a group of reporters about nine Catholic priests who were named in a recent Pennsylvania grand jury report on child sex abuse.

The church removed these men from their parishes and sent them to the St. Louis area to live at Roman Catholic facilities that treat sexually abusive priests, according to SNAP, which aims to expose abusive clergy and provide support for victims.

The Archdiocese of St. Louis has said the nine priests did not serve in any capacity locally.

But local Catholics were not told that abusive priests were living in the community, said Clohessy.

“They are among literally hundreds of predator priests from across the country who have been sent and spent time in St. Louis with virtually no warning to parents and parishioners,” Clohessy told reporters on Sept. 20.

Speaking to reporters about abuse is a familiar role for Clohessy.

But it’s also a new one.

He recently returned to SNAP as a spokesman after resigning in 2016 as national director of the organization amid controversy over a lawsuit from a former employee. That employee alleged that SNAP had taken kickbacks from attorneys who represented victims of sexual abuse.

Both SNAP and Clohessy deny the allegation. And the lawsuit was settled. David Clohessy, a longtime leader with SNAP, addresses the media near the Cathedral Basilica of St. Louis on Sept. 20, 2016. Clohessy holds a list of abusive priests that SNAP says were brought to St. Louis for treatment from Pennsylvania. Some of the priests could now be deceased. RNS photo by Eric Berger

Clohessy’s return is part of a reboot for SNAP.

The group recently hired a new executive director and hopes to move on after a period of internal conflict. The organization has a lot of work to do in the wake of a renewed scandal over how the Roman Catholic Church has dealt with priests accused of abusing minors.

The 62-year-old Clohessy said he left the organization in December 2016 because of internal conflicts and because of concerns about his health. He is undergoing treatment for cancer. His departure was made public after news of the lawsuit broke.

Barbara Blaine, the founder of SNAP, announced her resignation in January 2017 and also said it was unrelated to the lawsuit. She died in September 2017.

But Gretchen Rachel Hammond, its former director of development, claimed SNAP fired her in 2013 because she questioned whether the organization was referring potential clients to attorneys in exchange for donations. She sued after being fired. That suit was settled earlier this year.

Hammond said the terms of the settlement prevented her from commenting. SNAP leaders also declined to discuss the lawsuit.

“We just see it as resolved and are pleased with that,” said Tim Lennon, president of SNAP. After the resignations and Blaine and Clohessy, Lennon and other board members took over the leadership of the organization.

Since March, Lennon, who lives in Arizona, had been spending most of his time at the organization’s headquarters in St. Louis, helping to find a new director and manage the organization.

Then came the Pennsylvania grand jury report in August, which documented cases of 300 Catholic priests who grand jurors said sexually abused more than 1,000 children over 70 years in several Catholic dioceses.

Lennon said he and others involved with SNAP anticipated the findings because of previous investigations in Pennsylvania, such as a 2016 report on the Altoona-Johnstown Diocese that found 50 priests allegedly had committed abuse. 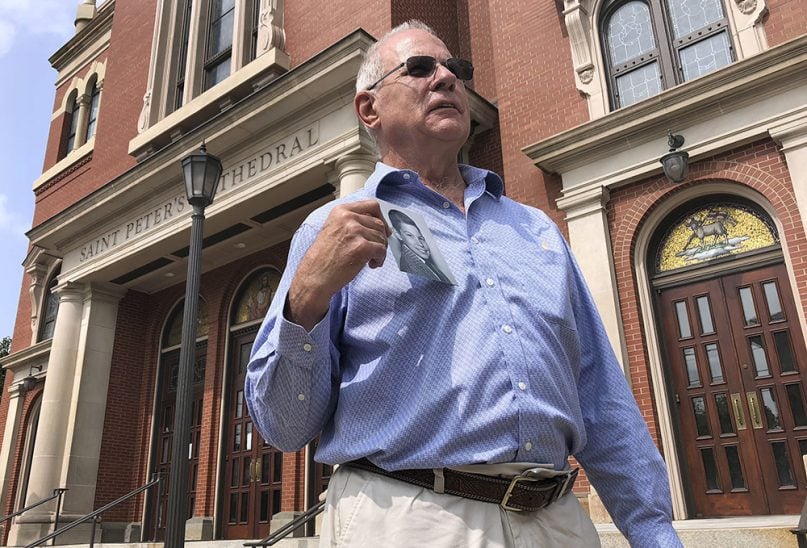 Tim Lennon, president of the Survivors Network of those Abused by Priests, holds a photo of himself as a young boy, in front of the Cathedral of St. Peter in Scranton, Pa., on Aug. 20, 2018. (AP Photo/Michael Rubinkam)

He predicts that an investigation into Catholic parishes in Missouri, if done thoroughly, will find abuse on a similar scale. Missouri Attorney General Josh Hawley announced an investigation into the state’s dioceses last month, but thus far the Catholic leaders have only been asked to voluntarily comply and provide records rather than being subpoenaed because Hawley does not have criminal jurisdiction, he said.

SNAP and others have urged Hawley to cooperate with local prosecutors who could subpoena the dioceses for records on priests, including those who were transferred from Pennsylvania to Missouri.

“As long as the church controls the information, they control the investigation. I don’t see how there can be any kind of an investigation where the church says, ‘Well, we’re here,’” said Lennon, who was raped by a priest.

Lennon estimates that he has received at least five times as many calls and emails each week from survivors and members of parishes in the wake of the Pennsylvania report.

Clohessy, who is now back in a voluntary capacity after four surgeries related to the cancer, said he feels the organization has “become stronger because of the incredible hard work and dedication of volunteers and board members who stepped into the breach over the past year or so. New blood is always helpful.”

The organization recently hired a new executive director: Zach Hiner, who had served as an assistant to Blaine, the founder, and as communications director with Prevent Child Abuse America. He started on Sept. 24.

Clohessy said he “can’t imagine” that the organization has changed its practices regarding referring clients to attorneys because “we haven’t done anything wrong.” Attorney Nicole Gorovsky speaks to reporters in St. Louis on Aug. 22, 2018, with clergy sex abuse advocate and victim David Clohessy by her side.  (AP Photo/Jim Salter)

Ken Chackes, an attorney who has represented abuse victims in lawsuits against the Archdiocese of St. Louis, was at the news conference and told Religion News Service he has made donations to SNAP but “there has never been any system of kickbacks.”

“Lawyers like myself who believe that SNAP is doing a good job … have made some contributions, but it’s never been, ‘You refer me cases and then got some of the fees,’” he said.

Barbara Dorris, a longtime SNAP outreach director, resigned in April after differences with board members. She is no longer associated with SNAP but described Clohessy as “a very talented, wonderful individual, and I hope they use his talents.”

Lennon said that the lawsuit and transitions had raised questions about SNAP. But, he said, the organization has moved on from them.

“I would say for a month or two, there was a great amount of fear, doubt, questioning that would be similar to any organization,” he said. “We also work in a community where trust is diminished because of the abuse by priests and nuns and deacons and brothers, so trust is an issue that sometimes come to play when change is made. It was a transition, and we have functioned amazingly well in the last four or five months.”

A few days into the new job, Hiner said, “It’s a whirlwind, and it’s a bit of an adjustment coming here and dealing with all of the survivors who are reaching out to us, and there are a lot of people coming forward who need support.”

Noting that he has “big shoes to fill,” he added, “I think one thing, particularly with survivors, is they had a very trusting relationship with David and Barbara (Blaine) and Barbara (Dorris), so I have some trust to build up and goodwill to earn.”