WASHINGTON (RNS) — As the national drama played inside, demonstrators from across the religious spectrum camped outside the Capitol building Thursday (Sept. 27) to protest for and against Brett Kavanaugh’s confirmation to the U.S. Supreme Court.

Roughly 300 students from Liberty University, a conservative Christian school 200 miles away in Lynchburg, Va., made the trek to voice their support for Kavanaugh.

About 150 students at the university’s Helms School of Government had signed up to visit the hearing in coordination with Liberty’s chapter of Concerned Women for America, a grassroots advocacy group, according to several at the Capitol. School president Jerry Falwell Jr., hoping to double that number, later expanded the offer of free transportation to other academic concentrations.

Liberty ended up sending at least two buses to the event, which students said was partly to counter protests against Kavanaugh earlier in the week by enrollees at Yale, his alma mater.

The delegation included both women and men, some brandishing “Make America Great Again” hats. Most were quick to shower praise on Kavanaugh. 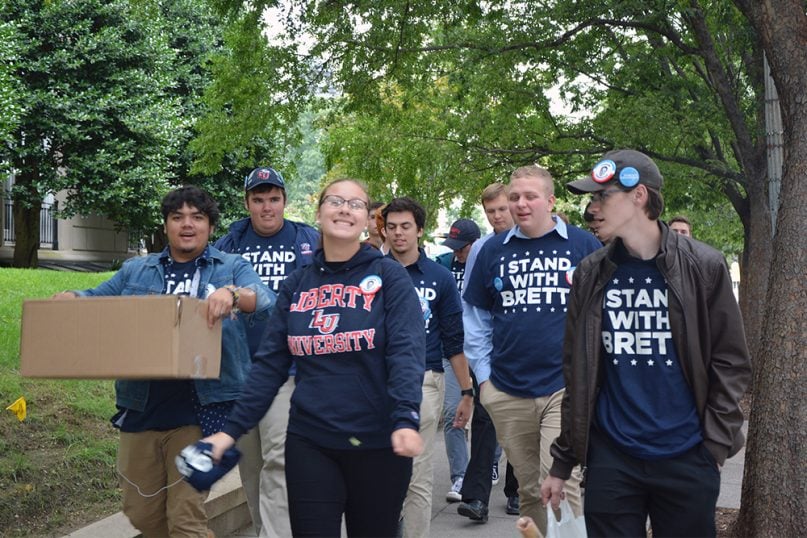 “We believe President Trump is an amazing man, and if he picked Judge Kavanaugh then I think he’s a good choice,” said Liberty freshman Alexander Swerdloff, one of several dozen Liberty students chatting excitedly as they stood in line to take a tour of the Supreme Court after a morning protest.

“I think he’s an exemplary candidate for the next justice,” she said. “I don’t think that just based on an allegation that he should be slammed without actual proof, without actual evidence, without due process.”

Audrey Boyette, a sophomore at Liberty’s Helms School, said her faith played a role in her support for Kavanaugh, whom she had hoped Trump would pick.

The tone was very different at the reflecting pool in front of the U.S. Capitol, where hundreds of demonstrators gathered later in the day for a “Cancel Kavanaugh” protest led in part by prominent Muslim American activist and Women’s March organizer Linda Sarsour. 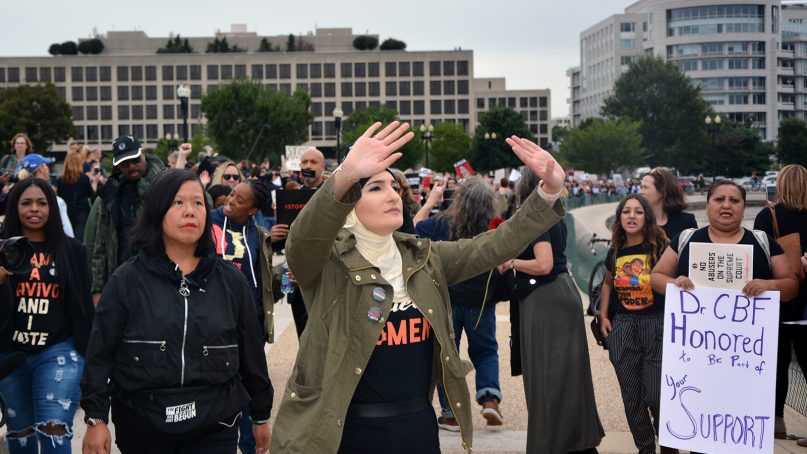 Signs with slogans such as “Kava-nope” bobbed alongside outstretched hands with “Believe women” written across their palms, amid chants of “Hey hey, ho ho, Kavanaugh has got to go!”

Among the protesters was the Rev. Susan Frederick-Gray, head of the Unitarian Universalist Association, who with other UUA ministers had donned her clerical collar and stole to protest in the office of Senate Judiciary Committee chair Sen. Chuck Grassley in the morning.

“As a Unitarian Universalist and as a progressive faith tradition we honor the leadership and the religious leadership of women,” she said. “I do think there is an issue that compels me as a faith leader that is about standing up for women’s rights — protecting women’s rights, women’s choice, and women’s consent.”

She added: “Truth matters. Facts matter. Having people of integrity and credibility in our leadership matters.… I hope that anyone of any theology or political persuasion would believe that.”

At least three religious groups — Catholic, Mormon and Episcopalian — led by women have spoken out in recent days, calling on lawmakers to further investigate the claims of Kavanaugh’s accusers. America Magazine, a Jesuit publication that had previously endorsed Kavanaugh’s elevation to the nation’s highest court, rescinded its support for him on Friday following Thursday’s extraordinary hearing and called for his nomination to be withdrawn.

Even among the students who had come by bus from Liberty,  some were more circumspect when it came to assessing the claims of California professor Christine Blasey Ford, who says Kavanaugh sexually assaulted her when both were high school students.

“If, based on the testimony today, there seems like there could be more behind the claim, then yes, it should be investigated,” said Satagaj. 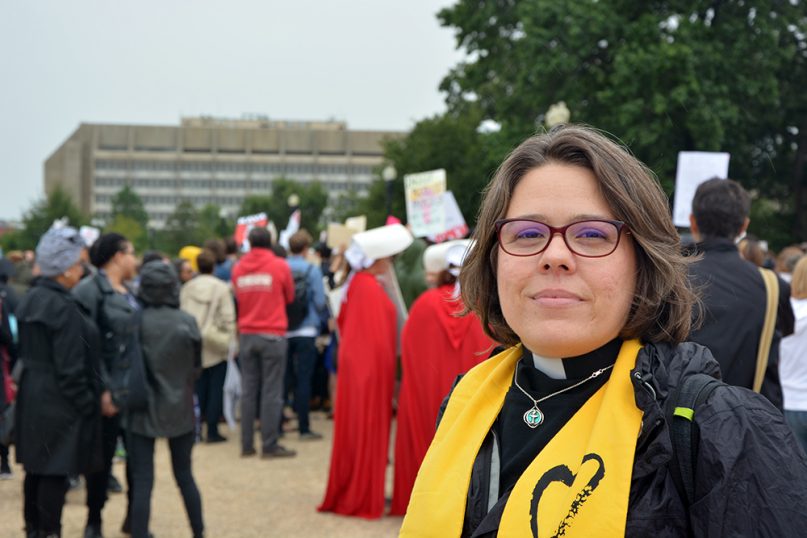 Several current and former Liberty students contacted Religion News Service to voice their frustration with Liberty’s presence, arguing the school did not offer to accommodate students who wanted to travel to Washington to demonstrate against Kavanaugh.

“Many students here were against going to the hearing today where, as most of the nation knows, our college sent many students,” Hannah H., a junior at Liberty who asked her last name be withheld for fear of reprisal, said in an email.

“I am very unhappy with my school’s presence at Dr. Ford’s testimony today,” A.J. Strom, a senior at Liberty, said in another email. “I think that it is insulting to Dr. Ford and women who have been sexually assaulted to, instead of listen to what Dr. Ford has to say, go and protest the fact that she is telling her story.”

The tension between Kavanaugh supporters and his detractors was made palpable when, as Ford’s testimony was getting under way, a large column of Liberty students in “Women for Kavanaugh” shirts walked past a demonstration in support of Kavanaugh’s accusers outside the Dirksen Senate office building.

A single protester holding a bright red umbrella walked over to the middle of the sidewalk. She silently turned her back to the students, thrusting her umbrella high into the air as they passed her on either side.

Scrawled across the umbrella in bold black letters were two words: “Believe women.”

Spiritual Politics
A good week for the culture war
Follow us on Facebook!
Submit your photos to RNS