PITTSBURGH (RNS) — At 9:52 a.m., they stood in silence in the cavernous sanctuary of Congregation Beth Shalom in the Squirrel Hill neighborhood here, less than a mile from the Tree of Life synagogue, where at 9:52 last Saturday (Oct. 27), a gunman had begun shooting.

Then they sat down to continue the litany of prayers and Torah readings that Jews have recited for generations.

Dressed formally in ties, jackets and dresses, and carrying babies in tow, these Jews wanted to send a message that they are proud of their faith and will not cower in fear in the wake of what has been described as the deadliest attack on the Jewish community in the history of the United States.  Eleven people were killed.

Earlier in the week, Robert Bowers, a truck driver from the Baldwin borough of Pittsburgh, pleaded not guilty in a federal courtroom to 44 counts, including hate crimes and using a firearm to commit murder in a crime of violence.

The Shabbat service at Beth Shalom was part of a nationwide initiative by the advocacy group AJC, #ShowUpForShabbat, encouraging Jews to come together in response to the horrific massacre.

There was also healing work to take care of. 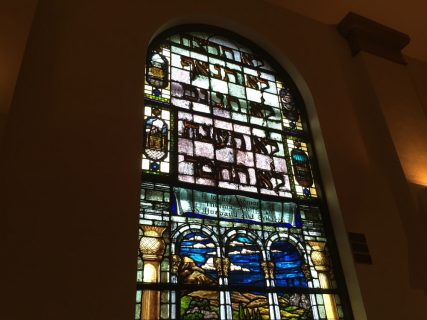 A stained-glass window at Congregation Beth Shalom in Pittsburgh’s Squirrel Hill neighborhood, pictured Nov. 3, 2018, bears the words of the Ten Commandments. The top line says “Do not kill.” RNS photo by Yonat Shimron

After members from among Tree of Life’s three congregations took turns reading the Torah portion for the day, Rabbi Jeffrey Myers, the rabbi of Tree of Life, stood up to give the sermon. He wanted to explain to a largely — but not exclusively — liberal Jewish community why he welcomed President Trump, who visited Pittsburgh along with First Lady Melania Trump on Tuesday.

First he pointed out that the day’s Torah portion offered wonderful examples of goodness, kindness and respect in the story of how Isaac takes Rebecca as his wife.

“I will not let anyone tell me how to welcome a guest to my house,” Myers said, responding to what he said were dozens of emails and calls from Jews angry that he had welcomed a president they believe condones white nationalism.

“I may not agree with some of the things any president ever says,” Myers explained. “That’s my right as an American. But I don’t have the right to spew hate. Hate does not belong in this country.”

He also said the president’s personal assistant as well as Jared Kushner, the president’s adviser and son-in-law, have called to ask how he was coping in days after the visit.

Despite some anger at the president’s visit — protesters with signs that said “Words matter” and “President Hate is not welcome in our state” marched outside as the Trumps made their visit — Myers was warmly received at Beth Shalom and was given a standing ovation at the end of his sermon.

Myers was at Tree of Life as the shooting began and was among the first to call 911 at 9:52 a.m. on that morning after he ran upstairs and found safety in a bathroom. 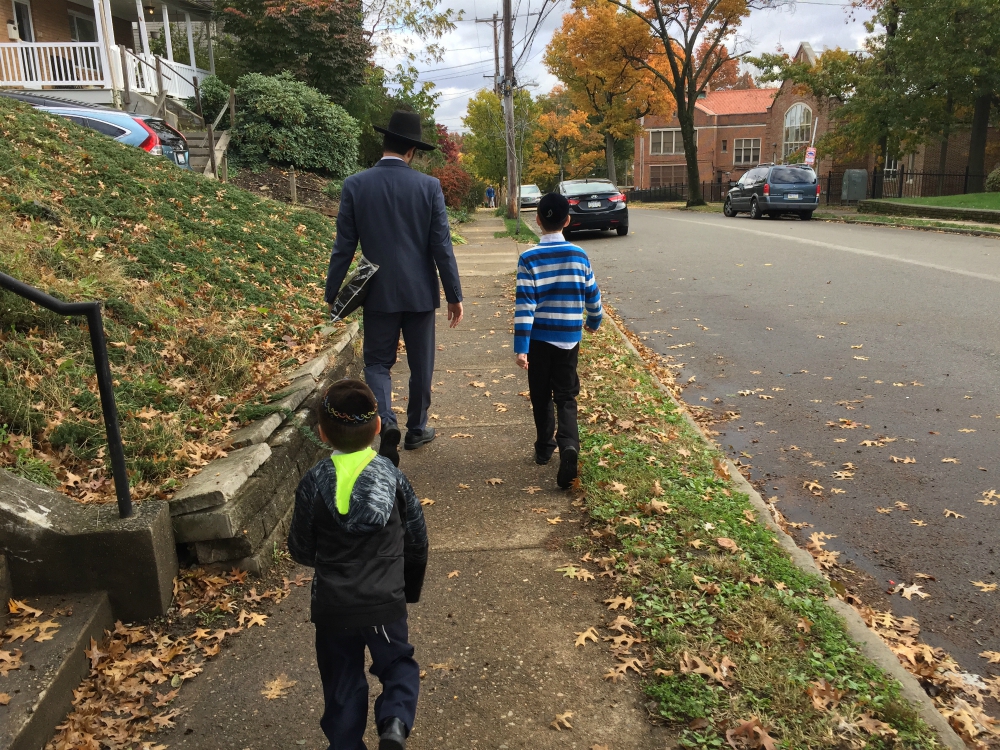 On Friday night, Tree of Life congregants gathered for the first time since the shooting for a service in the chapel of Rodeph Shalom, a Reform temple in the adjacent neighborhood of Shadyside, where they will continue meeting until their sanctuary is repaired. It is still an FBI crime scene.

At other services across the city, Muslims and Christians joined in the prayers to show their support.

“I never thought I’d say this, but ‘thoughts and prayers’ feel great,” said David Chudnow, volunteer manager at the Jewish Federation of Greater Pittsburgh, who participated in the events.

The Friendship Circle, a nonprofit organization dedicated to people with special needs, rented a tent outside its Squirrel Hill office and fed 350 people Friday as a gesture of unity.

Many came to Pittsburgh to join the embrace of the Jewish community.

“I’m here to hold people up and create a space for people to feel in community,” said Sam Sittenfield, a New York City-based program manager for Repair the World, a Jewish organization that cosponsored the event.

“You feel it at a gut level — that Shabbat is a time to get together,” said Sam Adiv of Brooklyn, N.Y., who was in Pennsylvania on a business trip and decided to swing by Pittsburgh to join the Jews of Squirrel Hill this weekend.

“Part of the power is that we help each other ride out the hills and valleys, the good and the bad,” said Adiv. “One of the most important things we can do is show up.”