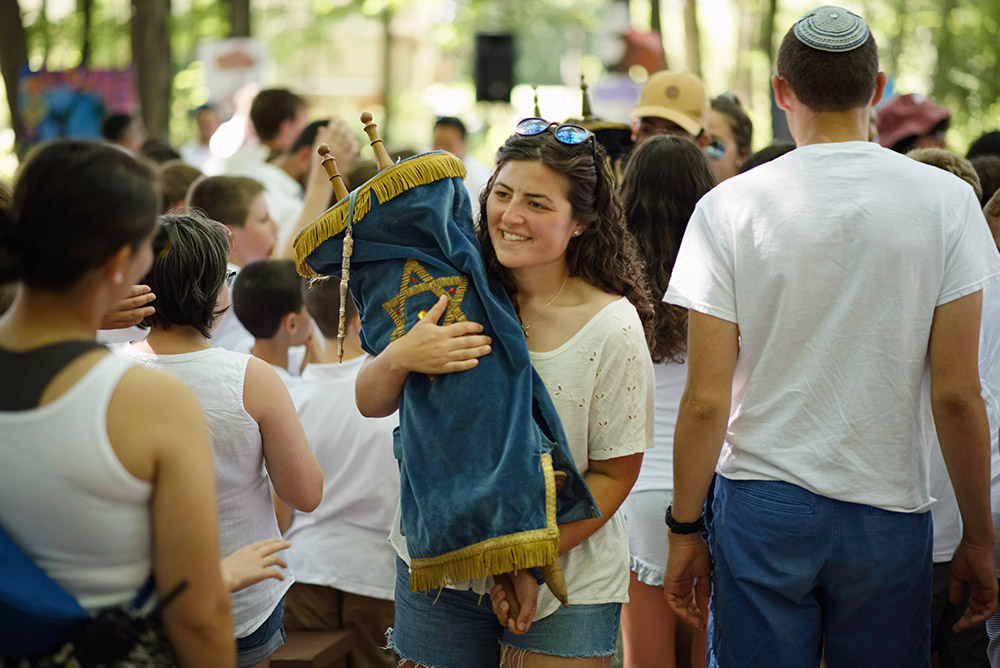 A female carries the Torah during a service at URJ Camp Harlam in Kunkletown, Penn., in the summer of 2016. Photo copyright Foundation for Jewish Camp
November 12, 2018
Jeffrey Salkin

With this post, I am sending a collective hug to my friends and colleagues in California who are enduring nothing short of hell on earth.

I am sending a collective hug to my colleagues who have gone well above and beyond the call of duty in comforting their congregants, providing aid and rescue for them – and, in one noble act, rescuing the Torah scrolls from an endangered synagogue.

Shout out to Rabbi Barry Diamond, who did precisely that.

This happened during the eightieth anniversary of Kristallnacht, when rabbis also ran into burning synagogues. It is a powerful and instructive irony.

I am sending a collective hug to those alumni of Camp Hess Kramer and Camp Hilltop in the Malibu hills, that have been destroyed.

These are American Jewish holy places. Like other holy places, they exist not only in a physical sense, but with their own emotional and spiritual footprint as well.

Let me take this opportunity to sing the praises of Jewish summer camps.

Because, if it were not for a Jewish summer camp, I would not be the rabbi, the Jew, and the person that I am today.

It was almost fifty years ago.

On a Sunday morning in January, 1969, my father drove my brother and me up to Great Barrington, Massachusetts to visit the Eisner Camp (one of the Reform movement’s camps) to see if we wanted to go there.

It had snowed the night before. We could not find the camp. We were about to ditch the entire mission and head back to Long Island.

Finally, my father stopped at a gas station to ask for directions. A gas station attendant pointed down the road. We followed his directions, and found the road. We had passed that road several times. It turned out that the freshly-fallen snow had obscured the sign that pointed towards the camp.

I have always believed that the anonymous gas station attendant was Elijah the prophet — sent by God to perform that one mitzvah on that snowy January morning.

The rest is history — my history and my family’s history. I attended Eisner, fell in love with Judaism, became active in the Reform youth movement, and went on to become a rabbi. My sons would ultimately go there and would work there. Many of my closest friends emerged from the Eisner experience.

Had it not been for Eisner, my Jewish life would have been very different — if it had existed at all.  And I know that I speak for countless thousands of American Jews.

Jewish summer camps are camps with a mission to create and model Judaism. There is a wonderful foundation that supports the holy work that happens under the trees – Foundation for Jewish Camp.

What can Jewish summer camps do that almost nothing else in the American Jewish world can achieve?

One last thing about what has been happening.

In the Bible, the prophet Elijah, fled to the wilderness of Horeb. He came to Mount Sinai, the site of God’s revelation to Moses and the Jewish people (I Kings 19: 11ff.)

God was not to be found in any of those experiences.

No. God was to be found in kol d’mamah dakah — translated here as “a soft murmuring sound,” but sometimes “a still, small voice.” An inner voice.

Jewish summer camps teach kids how to hear that voice.

That is a good thing.

An even better thing: you can help the Jewish community heal.  Congregation Or Ami in Calabasas has been particularly hard hit. They request donations to: Fire Response Fund. Go here to donate.

May Camp Hess Kramer and Camp Hilltop and those affected communities recover.

Like the Jewish people itself, may they rise again, phoenix-like, from the ashes.