(RNS) — Six years ago, an American filmmaker named Erika Cohn was at a meeting at the Palestinian Authority’s Ramallah headquarters, listening to a noisy discussion about raising the Palestinian territories’ legal marriage age and preventing domestic violence, when Kholoud Al-Faqih walked in.

Immediately, Cohn told Religion News Service, the air in the room seemed to change. “She had this really incredible presence that radiated throughout the room,” Cohn recalled.

After the meeting ended, Cohn introduced herself to Al-Faqih and discovered she was a judge in the Shariah court of Ramallah – the first female Shariah judge in the Palestinian territories, if not the entire Middle East.

When Cohn mentioned to Al-Faqih that she was a filmmaker, the judge smiled.

“I’ve been waiting for someone to come along and tell my story to other women and girls around the world,” she said.

Cohn’s documentary “The Judge,” which aired this week as part of PBS’ Independent Lens documentary series and is streaming online until Dec. 2, does just that, tracing Al-Faqih’s journey in leading a quiet social revolution.

In the Palestinian territories, the civil courts, where women have been judges since the 1970s, hear criminal, administrative and civil law cases. But the religious courts, where family cases are heard, have traditionally been headed by male magistrates and religious scholars.

An accomplished lawyer who had spent years helping battered women, Al-Faqih realized that a better avenue for change would be working as a judge to improve the lives of women facing domestic violence or family struggles.

When Al-Faqih first broached the idea with the leaders of the Palestinian religious court system, “I laughed and thought it was a joke,” Sheikh Tayseer al-Tamimi, the former chief justice of the West Bank’s Shariah court system, says in the film. Kholoud Al-Faqih, the first female judge in Palestine, hangs her judicial sash in the documentary film “The Judge.” Photo courtesy of The Judge

But Al-Faqih had done her homework, and she convinced him that the Hanafi school of Islamic law, one of the four major Sunni Muslim religious codes, which Palestinian Shariah courts adhere to, had no ruling against women adjudicating in Shariah courts.

“That was the origin of the idea, that I should throw a rock to stir these stagnant waters,” Al-Faqih told the cameras.

In 2009, she and another woman in the West Bank passed two judicial exams, successfully becoming the first women to do so in the more than 1,000 years that Shariah courts have existed in the Middle East.

Reema Shamasneh, a Palestinian attorney who takes on many women’s rights cases, said the two women paved the way for others. “It’s important for me because it broke the status quo,” she said. “It broke the deadlock of confining women to traditional roles. I’d love for there to be more women in this role.”

In one case shown in the film – one of about 40 to 60 that Al-Faqih sees per day – a man sits in Al-Faqih’s courtroom across from his ex-wife, arguing over his child visitation rights.

He starts to cite previous legal rulings, reading from a sheet of paper. “What she’s saying is in opposition to Article 163 and the interpretation of His Honor the Chief Justice,” he interjects.

Al-Faqih holds up her hand. “Khaled, I know all this,” she tells him. “Stop. I’ve memorized all the laws. Just tell me what you want.” Abashed, he quiets as she delivers her ruling.

“Sitting in her courtroom was this unbelievable experience,” Cohn said, “where she was part judge, part marital therapist, part counselor, part lawyer.”

With an unprecedented access to Palestinian religious courts – Cohn credits her nonthreatening team of one woman and a camera – “The Judge” offers a new look into the domestic lives and conflicts of women and children in the Palestinian territories, under Shariah and under patriarchy the world over.

“Before we named the #MeToo and #TimesUp movements, the first female judge of Shariah law revealed what it takes to fight dominant chauvinism in Palestine’s justice system,” said Lois Vossen, executive producer of Independent Lens. “A trailblazer who resembles a ‘Notorious RBG’ of her country, Judge Kholoud never suggests that Islam is anti-feminist — only the people who are resistant to equality and change.” 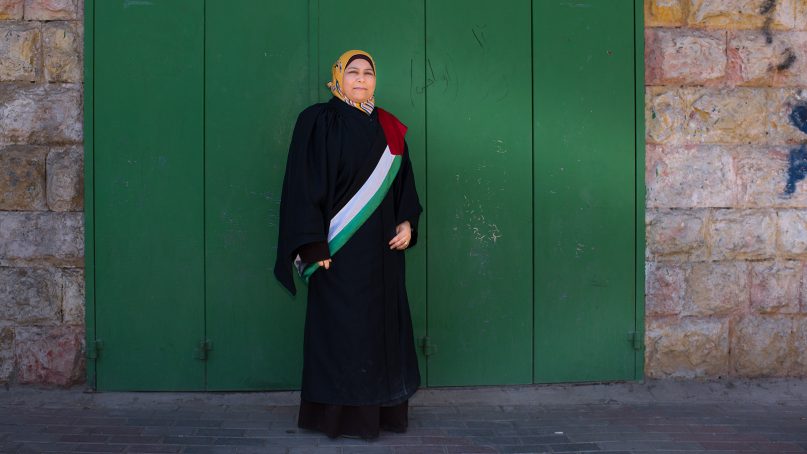 Kholoud Al-Faqih, the first female judge in Palestine, in the documentary film “The Judge.” Photo courtesy of The Judge

Cohn, who grew up in a largely Mormon community but was not herself Mormon, knows how difficult it can be to advance women’s rights while working within a religious tradition.

Al-Faqih’s “ability to work within an Islamic legal framework and a religious construct has really changed my perception,” the filmmaker said. “I once asked her if she ever felt a conflict between your feminist ideals and the Shariah, and she said, ‘The problem is not with the Shariah, but with the misinterpretation of the Shariah.'”

For Cohn, who met Al-Faqih while researching Islamic feminism at Hebrew University, that speaks to the broader way in which law is interpreted by those in power. “Law will always benefit those in power, so until you have equal representation, law will never benefit the population it’s meant to serve.”

The film, in that sense, is not about Shariah, but a reminder of the legal obstacles women and other underrepresented communities face everywhere.

“It’s a universal issue, and I don’t want people coming away thinking that this is a problem specific to the Middle East,” Cohn said. When she was doing man-on-the-street interviews in the West Bank, asking passers-by whether women should be allowed to rule Shariah courts or not, the responses sounded eerily familiar.

“People were talking about how women could be too emotional and maybe they shouldn’t be leaders,” Cohn noted. “These were the same questions people were asking when Hillary Clinton was running for president. This is very much in our own backyard.” 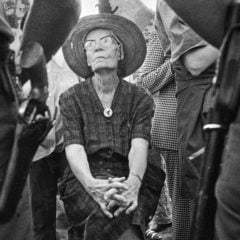 News
Dorothy Day defied definition. Now the potential saint is the subject of a new film.