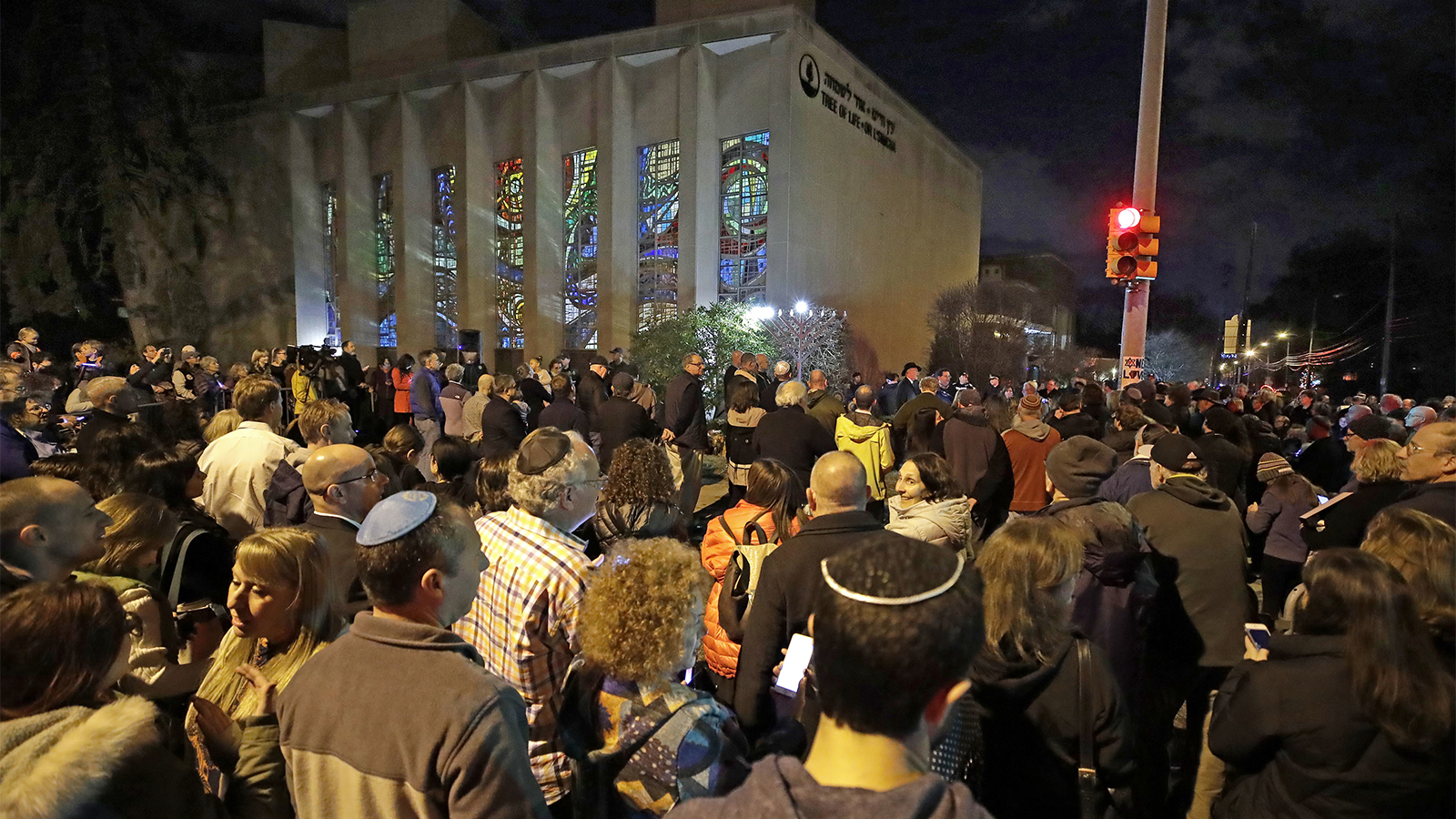 Rabbi Jeffrey Myers leads a gathering in Hanukkah songs after lighting a menorah outside the Tree of Life synagogue on the first night of Hanukkah, Dec. 2, 2018, in the Squirrel Hill neighborhood of Pittsburgh. A gunman shot and killed 11 people while they worshipped on Oct. 27, 2018, at the temple. (AP Photo/Gene J. Puskar)
December 6, 2018
Jeffrey Salkin

Every few years, the New York Times runs a contest: “Best Essay About Hanukkah By An Ambivalent Jew.”

That is the only explanation for this past week’s crop of New York Times op-ed pieces about Hanukkah.

“The Gray Lady” is showing signs of advanced Jewish arteriosclerosis.

The author, a comedy writer,  begins with the traditional disavowal of any substantive Jewish connections or affiliations.

In theological terms, there is little love lost between me and Judaism. But culturally — with my unwavering devotion to [Howard] Stern on the radio, [Philip] Roth on the page, [Bob] Dylan on the stereo and kugel in the oven — I am a Hasid.

This self-identification as a Rhett Butler Jew — “Frankly, my dear, I don’t give a damn” — points him in the direction of embracing the "traditional" Hanukkah symbol — Hanukkah Harry — a fictional character on Saturday Night Live.

My wife, who grew up in Italy, seemed skeptical. “Did you learn about Harry at Hebrew school?” she asked. “I don’t recall,” I said, truthfully. “It was a Reform temple, so they mostly just talked about the Holocaust.”

But, all forms of Jewish expression are not created equal. Maimonides is still better than Matisyahu -- if only because two hundred years from now, people will still be studying Maimonides.

The self-proclaimed cultural Jew must realize that laughing at Howard Stern and loving Dylan, however enjoyable, is Jewishly infertile. It will not create another generation of committed Jews.

The author believes that the bulk of his religious education was about the Holocaust. I somehow doubt that, but it doesn't matter.

That was the piece that "stuck." Why? It is the most dramatic. It is what has sufficed for too many Jews as their Jewish connection. As such, it is far too negative to serve as any kind of regular link to a joyful Jewish identity.

Did it sting to see my movement “dissed” in the pages of the Times? Yes.

Do I, as a Reform rabbi and educator, feel chastened — about the time we dedicate to real Jewish learning in a way that would produce lasting Jewish Velcro?

As my fellow Jews the world over light menorahs, the eternal flames twisting through centuries to connect them to their woebegone forebears, my family will gather to pay our respects to Hanukkah Harry, the Not Ready for Prime Time Player who delivers toys to Jewish girls and Jewish boys.

I am sad: that this admittedly ignorant Jew would place the utterly trivial — c’mon, this is an SNL skit! — before the public as a reflection on Hanukkah.

I am sadder: that he missed the original joke. The SNL appearance of Hanukkah Harry was intended, I think, to satirize the Jewish need to create a competitor to Santa Claus.

I am disappointed: that the New York Times thought this was worthy of publication.

Which brings me to the earlier Times reflection on Hanukkah: The Hypocrisy of Hanukkah.

The author writes that Hanukkah had always been "an afterthought on the Jewish calendar...commemorating what has to be one of God’s least impressive miracles — a small container of oil lasted for eight nights!"

Today, he believes, Hanukkah has become a "Semitic sidekick for Christmas, a minor festival pumped up into something it was never meant to be so that Jewish kids won’t feel bad about not having a tree."

That is not why Hanukkah got big.

First, the miracle of Hanukkah was not the miracle of oil. The ancient rabbis invented that story, as a way of deflecting attention away from the real miracle, that they deemed too dangerous to promote.

Which is: a tiny band of Jewish fighters -- the first "band of brothers" -- took on the strongest army in the world.

If you like that military miracle story, here could be one reason.

We know that story. It is the story of the state of Israel.

Hanukkah is about modern Jewish self-definition. That, rather than Santa Claustrophobia, was responsible for the revival of Hanukkah.

And, it is about a small, seemingly minor religious culture that stood up to the most aggressive culture in the world.

And held its own against them.

This December marks the fortieth anniversary of one of the most explosive articles to ever hit the New York Times. It appeared in the "Living" section. It was "Christmas Comes To A Jewish Home," by Anne Roiphe.

In that article, Anne described how her Jewish family celebrated Christmas -- complete with Christmas stories, fables from other cultures (none of them Jewish) -- and yes, the tree.

The you-know-what hit the fan. Postal workers suffered from hernias carrying sacks of angry letters to the Times office. Rabbis had enough sermon fodder to last until Passover.

Then, something happened. Anne Roiphe endured an unexpected tsunami of anger. She got to thinking. Hmnn: if people are this angry, then perhaps, just perhaps, I have missed something in Judaism.

Maybe I need to take another look.

The result: her memoir, Generation With Memory -- one of my favorite Jewish books, the chronicle of her quest for meaning in Jewish life.

It did not take long for Anne Roiphe to win the "most improved Jewish camper" award. She became one of the most respected Jewish women writers of our time, even meriting a regular column in the Jerusalem Report.

Perhaps this week's two authors will experience a small amount of push back on their essays. Perhaps the pushback might encourage them to take a serious  look at a tradition that they have only sought to trivialize and/or to misinterpret.

Perhaps some rabbis will reach out to them, and want to become their teachers.

This is, after all, a season of miracles.

Related Posts
By Bobby Ross Jr.
Weekend Plug-in: April 3, 2020
By Omar Suleiman
At Christmas, Christians and Muslims take time to talk about loving Jesus, and each other
By Amy Butler
How to celebrate Christmas: Change the world
By Emily McFarlan Miller
Do humanists celebrate Christmas?
By Claire Giangravé
In Christmas message, Pope Francis calls on Vatican officials to embrace change