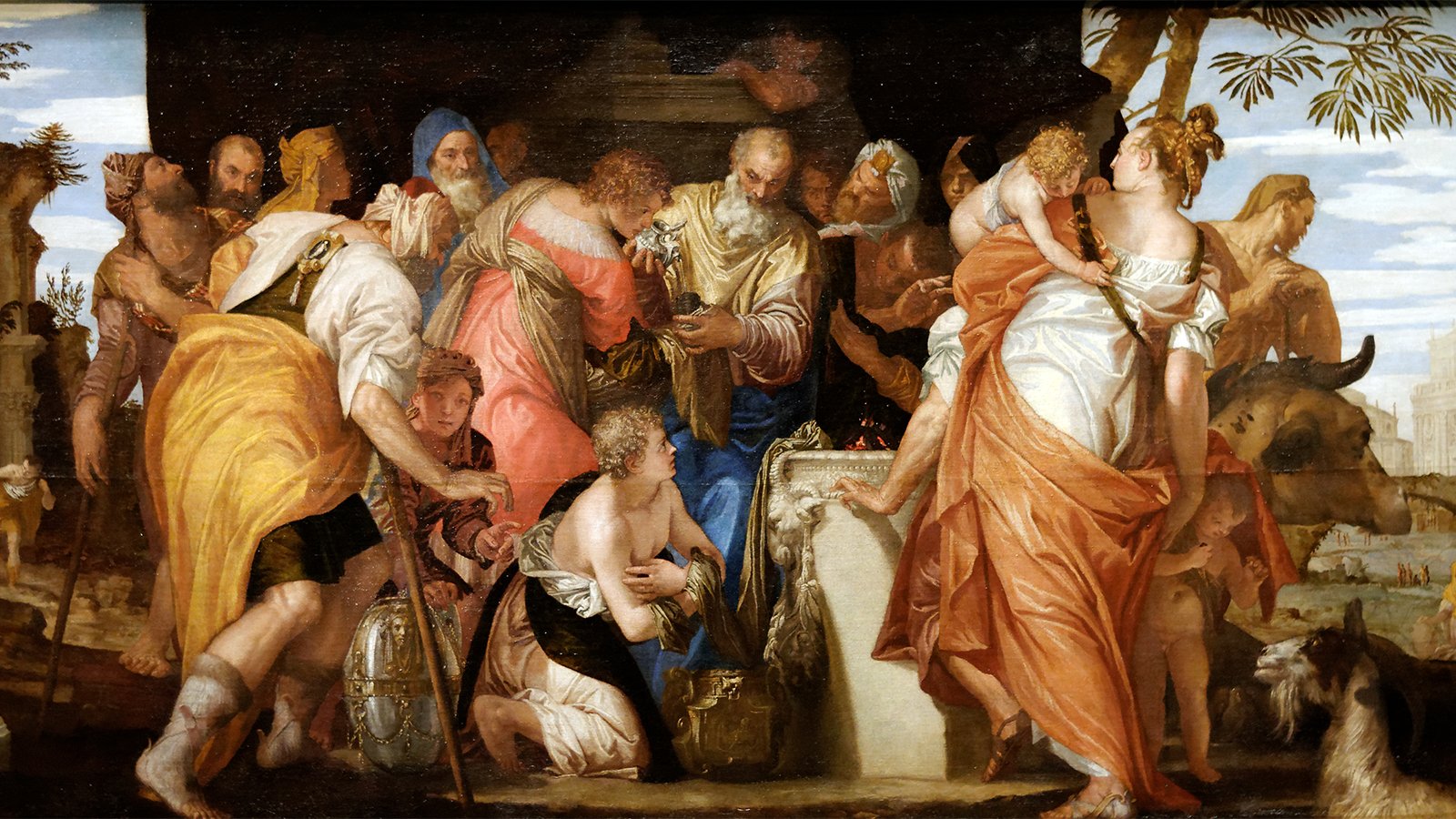 “The Anointment of David,” circa 1555, depicts the Old Testament scene when the young shepherd David is anointed by the prophet Samuel. Similar paintings have incorrectly been labeled as Saul anointing David. Image by Paolo Veronese/Creative Commons
December 6, 2018
Menachem Wecker

(RNS) — When Catholic News Service took to Twitter to wish its nearly 170,000 followers a happy Hanukkah this week, the wire outlet inadvertently shared a detail from the Arch of Titus depicting the seven-branched Temple candelabrum being carted away by Roman soldiers after the destruction of Judaism's holiest site in 70 A.D.

One group that can commiserate with the embarrassed CNS editors, who swiftly apologized for their faux pas, is the world's museum curators. With its long and tangled history, biblical iconography is a minefield for misattribution and mislabeling, especially as even casual knowledge of the Bible and other sacred texts is on the decline.

On a recent visit to the Cleveland Museum of Art, a reporter noticed a wall placard identifying a gilded and illuminated page from a 13th-century French psalter as Saul, Israel's first king, in the act of anointing David, who followed him on the throne. In the bottom left corner, a young man bows his head as a bearded, haloed older man anoints him from an oil jug. Another elderly man in a conical hat looks on, bearing another jug.

Such a scene would be very surprising because Saul, far from anointing his successor, tried to assassinate David, whom he correctly foresaw would replace him. In fact, the Bible's First Book of Samuel tells of the prophet Samuel anointing David after having first tried to crown the young shepherd boy's brothers.

After the reporter pointed out the misidentification to Stephen Fliegel, the museum’s curator of medieval art, the museum changed the label reference from Saul to Samuel. “I am not sure who originally identified the scene, probably a dealer or collector,” said Fliegel, who didn’t know of anyone questioning the trio’s identities since the museum acquired the work in 1985.

The top people at museums don’t typically write the labels, according to Linda Seidel, a medieval and northern Renaissance art professor emerita at University of Chicago. “More likely, it is someone of lesser stature, who may not be as widely read or whose expertise is not yet as broad or deep,” she said.

The Saul-Samuel confusion is apparently a common one. When asked about its identification of the same scene in its 15th-century Netherlandish Isabella Breviary, which it too had labeled “Saul anointing David,” the British Library told Religion News Service that it agreed the anointer was Samuel. “Our labelling team have been alerted, and this will be corrected,” said Kathleen Doyle, lead curator of illuminated manuscripts.

The confusion of Samuel and Saul has also plagued recent auctions. In September 2017, Christie’s sold a “Saul Anointing David” by an artist in the circle of Giuseppe Chiari for $1,250. Even a Jewish publication referred to a scene of Saul anointing David in the wall decorations of the ancient synagogue at Dura-Europos in Syria.

Matthew Gabriele, professor of medieval studies and chair of the religion and culture department at Virginia Tech, didn’t want to pick on the Cleveland museum, which he called a “wonderful place.” But he said that mislabelings can exacerbate a situation where the public already tends to prioritize the aesthetics of religious artifacts over meaning and context. The depiction in Rome's Arch of Titus of Titus’ Sack of Jerusalem includes a menorah being taken. Catholic News Service erroneously sent a Hanukkah greeting using the image of Jerusalem being pillaged. Photo courtesy of Creative Commons/Damian Entwistle

Erroneous labels can lead to misimpressions not only about biblical events but 13th-century politics, Gabriele adds. If it’s Saul doing the anointing, "then we have a weird polemic about the power of succession related to medieval kingship, and maybe also (in) a sense a critique of it," he said. “If it’s Samuel, then it says something about the power of bishops to make kings — about church and state, pope and emperor,” which in fact was much on the minds of contemporary Europeans.

Less common may be a quick response to routine mistakes. Recently Meredith Warren, a biblical and religious studies scholar at the University of Sheffield in England, alerted the British Library to an error in a label, which details John the Baptist’s baptism of Jesus in a manuscript fragment of the Gospel of John. “No such event takes place in the Gospel of John,” Meredith said.

The library likely erred either due to a lack of specific biblical studies training for curators, or to the often contradictory accounts of similar events in the Bible, according to Warren. “Jesus is baptised by John the Baptist in the other Gospels, so it’s easy to assume it happens in John as well,” she said in an email.

But the library, she said, told her to fill out what she called a generic feedback form, and then she never heard back.

Warren points out that mistakes, while understandable, spoil the experience of going to a museum. “The fun part of museum visits is really learning all the little things that we miss when we only look at the surface,” Warren said. “Accurate labels can give us a little, sneak peek at those secrets that the experts know.”

The more rare the subject, scholars say, the more likely it is to be misidentified. Old Testament subjects “would likely be the most frequently confused,” according to Rabia Gregory, associate professor of religious studies and affiliated art history faculty at University of Missouri.

Most of the errors Gregory has seen involve confusing a more familiar subject with a similar less-famous one. “Depictions of Jael killing Sisera are sometimes mistaken for Judith killing Holofernes,” she said, referring to two women who vanquish foes of Israel. “Confusing the names of figures in an anointing scene would be a similar kind of mistake.”

Islamic subjects are also vulnerable to error, said Ken Chitwood, a University of Florida doctoral candidate who studies and writes about Islam. Museums often display Islamic texts without context, according to Chitwood, and identify Islamic art and artifacts as foreign, rather than part of Western civilization, drawing on long-standing Orientalist tropes, he said.

Wall labels that quote from the hadith — narratives that don't appear in the Quran but are attributed to the Prophet Muhammad or those in his orbit — also can blur the authority of different sayings, according to Chitwoood.

Because the origin of a teaching from the hadith is as important as what it says, simply quoting the text without giving its chain of transmission can be misleading. Chitwood said he has seen exhibits that include the quote, “Seek knowledge even if you have to go as far as China,” without cautioning that many scholars see the teaching as highly unreliable.

“Most people probably wouldn’t know that they saw a hadith ripped out of context or appreciate that the Arabic was misspelled or completely wrong,” Chitwood said.

That visitors don’t know what they don’t know makes the mistakes particularly dangerous. “Museums, texts and scholarship are supposed to help us learn new things and see old things in new ways,” he said.

Or as Samuel himself might tell the museums, if he channeled his own rebuke of Saul in 1 Samuel 13:13, “You have done a foolish thing.”