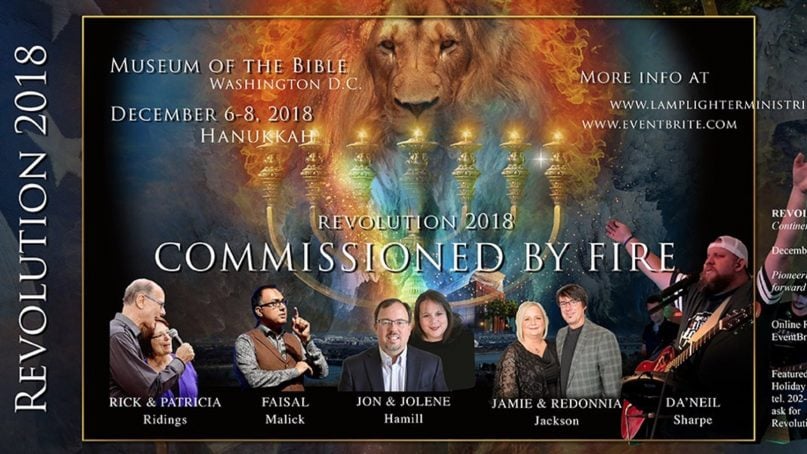 The original poster for the Revolution 2018 Commissioned By Fire event that was to be held at the Museum of the Bible in Washington. Screenshot

(RNS) — After encountering a barrage of criticism for agreeing to rent space to a charismatic Christian group that claims the Trump presidency is part of God’s plan, the Museum of the Bible abandoned plans to host the group and moved its meeting to the Trump International Hotel.

The Revolution 2018 event, a three-day conference run by Jon and Jolene Hamill of Lamplighter Ministries, begins in the nation’s capital Thursday (Dec. 6). It is intended, its website said, to “focus on real-time prophetic revelation with governmental authority.”

The group, which held a similar conference at the Museum of the Bible last year, boasted in promotional material for the event that the museum “represents an ‘Ark of the Covenant’ for our nation.”

It also emblazoned the word “Hanukkah” on its poster and alluded to the Jewish holiday as being providential.

“Something is about to change,” wrote the Hamills on the website. “I feel a visitation is at hand. And He is summoning us together for a very important moment which will redefine our future. Not a coincidence we are gathering over Hanukkah.”

But a group of biblical scholars, including some members of the museum’s own advisory board, objected strongly to the gathering, saying it betrayed the values the museum says it wants to uphold, including being open to people of all religious faiths.

“As a not-for-profit in Washington, there’s some clear restrictions on what we can, and can’t, support,” said McKenzie. “One of them is religious services. As we look through this, the intent and aim of the organization didn’t fit within those parameters.” The Museum of the Bible entrance in Washington. RNS photo by Adelle M. Banks

The change of venue is only the latest skirmish with scholars who claim the museum privileges the Protestant Bible above other versions and is intended to advance a broader evangelical agenda.

“They claim to be an unbiased institution of public scholarship interested in a fair and nonpartisan exploration of the Bible, and they’re not,” said Mark Leuchter, professor of religion and director of Jewish studies at Temple University in Philadelphia. “They’re an evangelical institution with a fundamentalist evangelical agenda.”

The museum has long fought suspicions of being a center for proselytism and political influence. Its founder, Oklahoma billionaire Steve Green, announced plans to open the museum blocks from the U.S. Capitol in Washington in 2012, shortly after his family’s arts-and-crafts chain, Hobby Lobby, sued the Obama administration over the contraceptive mandate in the Affordable Care Act. The company won that case at the Supreme Court two years later.

The museum, where Green is chairman of the board, has also faced questions about the problematic origins of some of its antiquities. In October, it acknowledged that five Dead Sea Scroll fragments it had on display were forgeries and pulled them from a display case.

Earlier this year, the museum returned a medieval New Testament manuscript to the University of Athens after learning the document had been stolen. And last year, Hobby Lobby agreed to return nearly 4,000 artifacts to Iraq after they were found to have been looted from Iraqi archaeological sites.

The latest conference appeared to suggest that the museum was particularly welcoming to charismatic Christians. Lamplighter Ministries is part of a larger movement of independent charismatic groups that see President Trump as fulfilling God’s plan to “bring heaven to Earth” by placing Christian believers in top government posts.

McKenzie, the museum’s new CEO who came on board in August, said the museum wanted to work toward being open to all: “We have a wide constituent base of folks that support us and we want to be open as the mission states to all people to engage with the Bible,” he said.

Scholars, including Marc Brettler of Duke, said the change of venue was welcome.

“I see this as an important first step among many steps,” said Brettler, a professor of Judaic studies and an expert on the Hebrew Bible. “It will be crucial to see what further changes are taken in the future in the exhibits, the bookstore and the publicity, to see that the museum is really listening to the scholarly community, to the Jewish community, and to others who have offered strong objections to the museum’s current direction.”