(RNS) — As the 115th Congress winds down amid chaos in Washington, one unsettled debate concerns a long-uncontroversial line added to Section 501(c)(3) of the Internal Revenue Code in 1954 barring nonprofit entities, including houses of worship, from endorsing candidates for office.

Republican-aligned elites in and out of government are once again having a field day raising money and rallying their troops against a legislative solution that has worked extremely well for more than six decades.

It’s time to stop the insanity and start focusing on real problems.

The Johnson Amendment, named for the Texas senator who later became the 36th president, was considered settled law for more than 60 years. It held together a broad social consensus against electioneering in churches. Secularists and lay believers alike agreed that nonprofits should not be taxed — but that if they wanted to engage in partisan politics, they should pay into the system like the rest of us.

For their part, two generations of clergy have been almost unanimously pleased with the provision. It provides them with a popular and respected mandate to focus on their mission rather than cater to donors’ partisan political demands. As institutional religion declined in American society, the ban on pulpit endorsements has actually helped clergy retain some of their legitimacy and moral authority.

Preachers know that, though their personal political zeal often threatens to carry them across the line from exhorting on moral issues to endorsing or opposing candidates from the pulpit, it’s not taken well in the pews.

And for preachers whose congregations do want them to use their pulpits that way, they are free to do so in almost every case, as the law is almost never enforced.

President Trump signs an executive order in the Rose Garden of the White House in Washington, D.C., on May 4, 2017, asking the IRS to use “maximum enforcement discretion” over the regulation known as the Johnson Amendment, which applies to nonprofits and places of worship. (AP Photo/Evan Vucci)

The Rev. Leith Anderson, president of the National Association of Evangelicals, wrote last year that pastors know their parishioners have diverse political views. “They are grateful for rules that keep them out of political endorsement differences and battles,” he said.

The Catholic Church, which does not permit church funds to be spent on behalf of parties or candidates, also does not allow political endorsements during homilies for reasons of theological and pastoral integrity, regardless of their legal permissibility.

But for many conservative evangelical organizations, there is a “legality-morality gap” at play — they don’t want to talk politics in church, but they don’t want the government telling them they can’t. As a result, even before Trump captured the issue for his personal benefit, a few conservative groups, such as the Alliance Defending Freedom and the Southern Baptist Convention, began opposing any imposition on churches’ political endorsements.

But enabling pulpit electioneering didn’t become a Republican priority until Donald Trump’s 2016 presidential campaign — and then only sort of.

No clergy outside the Republican interest-group universe were clamoring for repeal, but Trump nonetheless made it a signature item on his religious-liberty policy agenda. Amid Trump’s and conservative evangelicals’ mutual manipulation after his election, the Johnson Amendment became an issue again.

Trump-loving and Trump-skeptical evangelicals soon ramped up their advocacy for repeal of the Johnson Amendment, even if they seldom emphasized it before Trump crashed the party. They couldn’t risk appearing insufficiently loyal by the standards of their Trump-adoring constituencies. 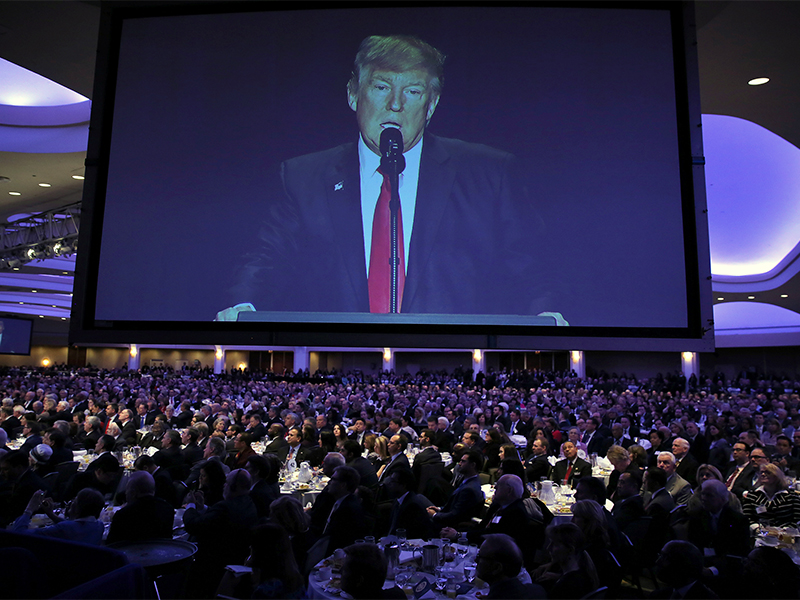 President Trump said he would destroy the Johnson Amendment during remarks at the National Prayer Breakfast in Washington, D.C., on Feb. 2, 2017. Photo by Carlos Barria/Reuters

Let’s be clear: Trump is never going to succeed at politicizing the nonprofit sector in the way he so self-servingly and destructively seeks. Responsible actors, including the IRS, seek no change because the current law works in the best interests of nonprofits, the government and society at large.

But since we now have this debate every time Congress has to pass a tax bill, let’s at least be honest about what is really at stake here.

If, hypothetically, Congress ever does repeal the Johnson Amendment, a lot could go wrong, and probably would. Democrat-aligned groups would demand that bureaucrats censor sermons. Republican advocates would have to answer for why they cheered as churches devolved into Super PACs.

As Maggie Garrett, vice president for public policy at Americans United for the Separation of Church and State, recently told me, “Changing the law would allow endorsement activity to permeate throughout tax-exempt organizations, transforming them from charitable organizations to tax-exempt partisan campaign organizations.”

The question is, in short: How much more damaging and obnoxious do we want politicized religion to become in this country?

We already live in a world in which Trump’s most eager evangelical lap dog, Southern Baptist megachurch pastor Robert Jeffress, hosts the Fox News All-America Christmas Special from his church. This event gives us the obscene spectacle of Trump disciple and hack journalist Todd Starnes standing in the pulpit where Baptist legends like George W. Truett and W.A. Criswell once preached.

The Johnson Amendment works great, protecting us from our worst instincts in religion and politics, and saving us from ourselves. Well, most of us.