PITTSBURGH (RNS) — In the first week after the shootings in the synagogue where my husband is a rabbi, our family received a packet of letters from a young woman in Los Angeles whose father had been killed along with 86 others in the bombing of a Jewish community center in Argentina nearly 25 years ago.

Notes came too from young people who had lost family members in other terrorist attacks: a child of one of the 343 firefighters who died on Sept. 11, others whose parents were in the buildings, the children of people killed in the Basque ETA terrorist attack in Madrid in September 1985.

One of them, Juliette Scauso, wrote, “These events although life shattering, bring out an indescribable sense of strength and community that directly go against all the perpetrator’s main goals. This strength and support from others is what may be at times all that seems positive and a source to continue on, however it is a vital part of the healing process to surround yourself with community.”

Since Oct. 27, when 11 Jews were killed at our synagogue, New Light, which rents space at Tree of Life, along with Dor Hadash, our family and congregation, and our neighborhood, Squirrel Hill, joined these victims affected by gun violence and hate crimes. 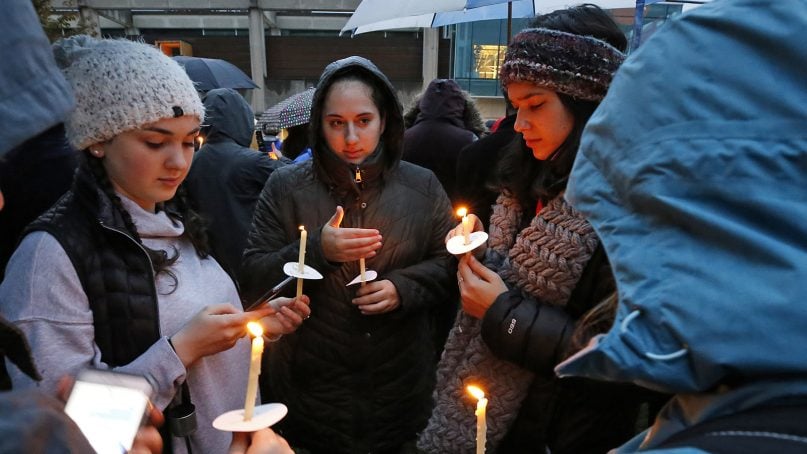 Holding candles, a group of girls waits for the start of a memorial vigil at the intersection of Murray Avenue and Forbes Avenue in the Squirrel Hill section of Pittsburgh for the victims of the shooting at the Tree of Life Synagogue. A shooter opened fire Oct. 27, 2018, killing multiple people and wounding others, including several police officers. (AP Photo/Gene J. Puskar)

There were always dangers, but since the attack, there is a pervasive sense of danger in the neighborhood. We feel jumpy in our worship space, and have been looking for ways to feel less vulnerable.

One way is to try to feel less alone. As soon as we became victims of this hate crime, we thought of those who had had similar experiences. The Mother Emanuel AME Church in Charleston, S.C., had been attacked in June 2015 and lost nine members; a mosque in Quebec had six members killed in a January 2017 attack; and six people were fatally shot at a Sikh temple in Oak Creek, Wis., in August 2012.

The way to connect with someone is to meet them, which is how we decided to go to Charleston to visit Mother Emanuel Church. We saw it as a way of taking control of the narrative, to say that both New Light and Mother Emanuel Church were harmed by hate but that we in turn were sending a message of unity and of love.

For a long time, our synagogue had gone on bus trips. In fact, Dan Stein, one of those killed on Oct. 27, had been the president of the men’s club and often arranged them. Our last one was in July last year, when we visited Jewish and African-American sites in Pittsburgh’s Hill District with members of the Rodman Street Missionary Baptist Church.

The association with Rodman had begun a few years before, when New Light Rabbi Jonathan Perlman spoke to their committee for visiting the sick. It expanded to joint Martin Luther King Jr. Day services and then classes, most recently on the Book of Proverbs, which is a shared wisdom tradition. When we thought about a trip to to Charleston, it made sense to have the Proverbs class make the journey to glean their wisdom on how to cope with the horror of being victims of a hate crime. One of the victims from New Light, Dr. Richard Gottfried, had been part of the Proverbs class, along with his wife, Peg Durachko.

Being attacked in a sanctuary, a place where one feels safe and protected generally, makes one feel violated on a variety of levels. It makes one question God and where God was and why this happened. It has also displaced us for the time being from the space where we had been praying and celebrating.

Marching together in Charleston’s Martin Luther King Jr. Day parade and chanting “No Place for Hate” and carrying banners (made for us by Squirrel Hill resident Aaron Hausman) that said the same, we communicated our beliefs as we rallied and invited all those lining the parade route to join us.

They did, and the chanting grew louder as Rainell Adams, one of our fellow travelers, began a new chant, “We are Pittsburgh strong and there’s no place for hate.”

As we all chanted the new words, we were empowered by the affirmation that whether in Pittsburgh or Charleston, there was indeed no place for hate. We were not afraid, despite the fear others had tried to impose upon us. We sang as loudly as we possibly could, “We Shall Overcome” and, from Psalm 133, “Behold how good and nice it is for brothers to dwell together.”

I don’t believe that it is possible to make good out of evil — nothing is equivalent to the 11 precious lives that we lost. No matter how much good comes out of our attempts to raise consciousness about hate crime, I wish every one of the 11 souls was here with us again.

I do think that it is incumbent upon us to respond to evil with good, or in the words of Psalm 34, “Turn away from evil and do good.” The best and strongest way to turn away from hate is to promote love and turn toward it. 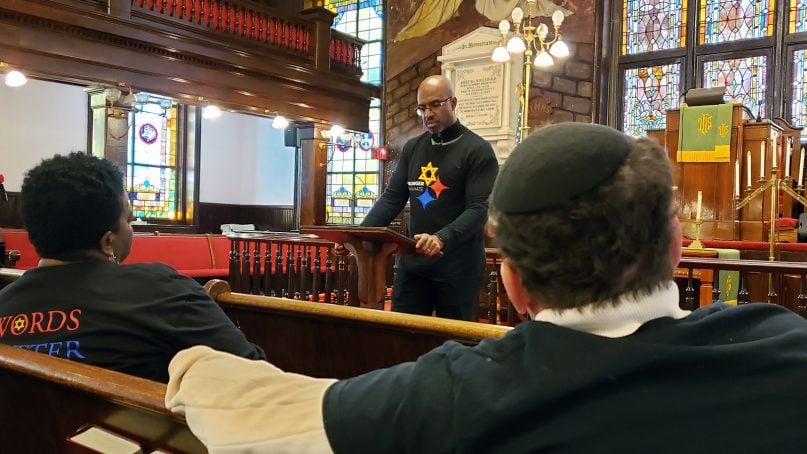 Pastor Eric Manning speaks to a group from Pittsburgh at the Mother Emanuel AME Church on Jan. 21, 2019, in Charleston, S.C. Photo by Brandon Fish/Charleston Jewish Federation

Pastor Eric Manning of Mother Emanuel did precisely that in inviting the 10 members of our New Light-Rodman delegation to the front of his church on Jan. 20. Others who were present in the congregation that morning, including Charleston Mayor John Tecklenburg and his wife, Sandy, were invited to embrace us. The baseless hate we felt Oct. 27 began to be eliminated from our consciousness as baseless love took its place.

Good cannot come out of evil, but good can come in response to evil. Worship should be a way of structuring the world, connecting to a God who is a source of strength and meaning and blessing. For me, worship creates a framework for a new narrative for how to perceive the world.

Worshipping along with others who have experienced deep-seated hate, marching with them to honor a man who supported the dignity of all people and believed in the importance of unity, we chose how to respond to the hate we experienced.

In response to hate, we rallied and worshipped to increase good in the world and to honor the memories of the three women and eight men who were slain in the Tree of Life synagogue on Oct. 27, 2018. May their memories be for a blessing. 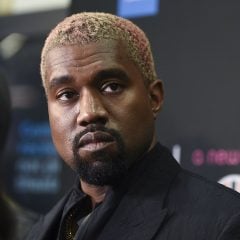 Opinion
We can’t overlook Kanye West’s antisemitism even if we’re tired of Ye news
Follow us on Facebook!
Submit your photos to RNS