WASHINGTON (RNS) — Religious leaders and people of faith offered mixed reactions to President Trump’s State of the Union address Tuesday evening (Feb. 5), which was billed as a unifying message but which some say maintains a polarized status quo in Washington.

Standing before Congress, Supreme Court justices, the Joint Chiefs of Staff and other dignitaries, the president did not offer a lengthy discussion of faith in his speech. But he did sprinkle his rhetoric with intermittent references to religion.

“We can make our communities safer, our families stronger, our culture richer, our faith deeper and our middle class bigger and more prosperous than ever before,” he said.

That line triggered applause from members of both parties. But other moments in the speech offered a reminder of the partisan divide that has riven Washington in recent years, with Republicans leaping to their feet to support the president and Democrats groaning or refusing to respond at all.

One such moment came when Trump mentioned God while emphasizing his opposition to abortion.

“Let us work together to build a culture that cherishes innocent life,” he said. “And let us reaffirm a fundamental truth: All children — born and unborn — are made in the holy image of God,” he said.

Very few Democrats applauded during Trump’s discussion of abortion, although West Virginia Sen. Joe Manchin — arguably the most conservative Democrat in the Senate — stood and clapped.

Trump also referenced his administration’s conciliatory stance toward Israel, a posture popular among evangelical Protestants who make up a substantial portion of the president’s base.

“Our approach is based on principled realism — not discredited theories that have failed for decades to yield progress,” he said. “For this reason, my administration recognized the true capital of Israel — and proudly opened the American Embassy in Jerusalem.”

The line, along with the reference to abortion, played well with Ralph Reed, head of the Faith and Freedom Coalition.

“President Donald Trump delivered an uplifting and inspirational message outlining the administration’s record level of achievement and describing his vision for the future of our country,” Reed said in a statement. “In two short years, President Trump has created 5.3 million new jobs … moved the U.S. Embassy in Israel from Tel Aviv to Jerusalem, defended religious liberty for people of faith, and protected the right to life for all Americans, including the unborn. As people of faith, we echo President Trump’s call for bipartisan cooperation and working together to put people ahead of politics and solve problems to improve lives.” 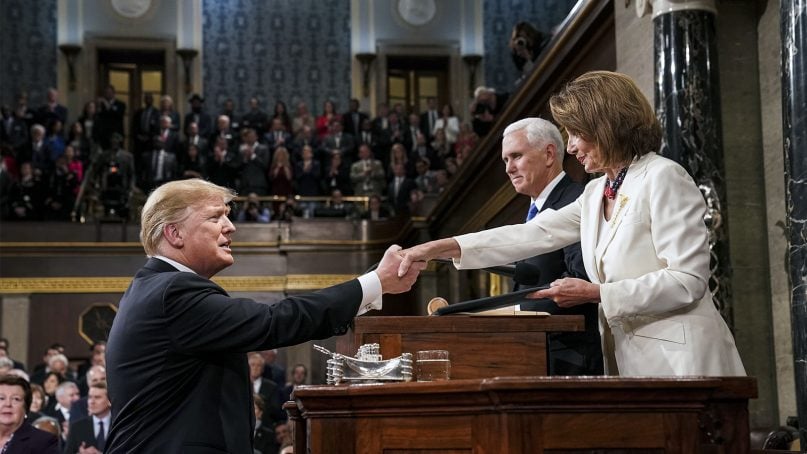 President Trump shakes hands with House Speaker Nancy Pelosi as he arrives in the House chamber before giving his State of the Union address to a joint session of Congress on Feb. 5, 2019, at the Capitol in Washington. (Doug Mills/The New York Times via AP)

Some Democrats in attendance also applauded Trump’s line about the embassy. Others did not visibly respond, including Reps. Rashida Tlaib, D-Mich., and Ilhan Omar, D-Minn., the first two female Muslim-American women elected to the U.S. House of Representatives. The two freshman lawmakers, who sat next to each other during the address, have drawn heated controversy for their criticism of the Israeli government and opposition to legislation that targets the boycott, divestment and sanctions movement regarding Israel.

After a discussion of his policy in the Middle East, Trump addressed rising anti-Semitism in the United States, which he described as a “vile poison” and a “venomous creed.” He pointed out two Holocaust survivors in the audience, including Judah Samet, a survivor of the October 2018 Tree of Life Synagogue shooting in Pittsburgh that left 11 people dead.

The president’s comments did not go over well with some Jewish groups.

“(Trump’s) invocation of Jewish victims of the Holocaust and the Tree of Life massacre rings hollow when he has consistently utilized antisemitic tropes, such as his campaign ads denouncing ‘globalists’ and espousing conspiracy theories about George Soros, all while advancing a white nationalism that puts Jews and so many other Americans in danger,” read a statement from Ginna Green, chief strategy officer of Bend the Arc, a Jewish social justice group that has been critical of Trump.

Similarly unimpressed were representatives from HIAS, a Jewish refugee resettlement organization that was also reportedly a target of the Tree of Life shooting suspect’s vitriol.

“Stories of Holocaust survivors are reminders that we should welcome the stranger and protect the refugee,” Melanie Nezer, senior vice president of public affairs at HIAS, said in a statement. “Making the U.S. great means upholding our commitment to international law and asylum seekers. Blocking people from applying at ports of entry and forcing asylum seekers at our southern border to remain in Mexico to await their hearing is illegal, dangerous and unprecedented in American history.”

The most contentious section of the evening was Trump’s discussion of his immigration policies, which largely revolved around defending his administration’s hard-line stance on border protection and warning of “organized caravans (that) are on the march to the United States” — a disputed claim that drew groans and boos from Democrats in the audience.

Some lawmakers who oppose Trump’s immigration policies invited guests who were immigrants, refugees or others impacted by the president’s policies.

Omar, a former refugee who spent Tuesday morning discussing her Muslim faith during a faith-and-politics event at the Center for American Progress, invited a Liberian immigrant facing deportation due to the Trump administration’s decision to end Deferred Enforced Departure protections for Liberians.

Mungsan told Religion News Service he is taking Trump’s speech “positively” but questioned why the president would call on immigrants to enter the country legally while also repeatedly reducing the refugee cap as president.

Lutheran Immigration and Refugee Service, the parent organization of Mungsan’s group, was skeptical of the speech.

“The only border crisis is one the administration concocted — one that separates families and makes it more difficult for those with a credible fear to claim asylum,” Bishop Michael Rinehart, LIRS board chair, said in a statement. “Children are dying out there. Families desperately seeking protection in the U.S. are being turned away or told to wait.”

Sen. Brian Schatz, D-Hawaii, brought along Valdir Solera, a man who came to the U.S. from Brazil in 2013 as a victim of human trafficking. Solera, an asylee whose attendance was promoted by the group Church World Service, said he was unimpressed with the president’s remarks.

“While the president attempted to bring Americans together, he continues to label all immigrants as criminals and ignore that good work that we have done for this country,” Solera said in a statement. “A wall wouldn’t have stopped me from being a victim of human trafficking, and a wall will not address the humanitarian crisis this administration has created at the border.”

However, Trump did manage to achieve at least one moment of bipartisan celebration when he mentioned the story of Alice Johnson. Johnson, who was also in attendance, was sentenced to life in prison in 1997 as a first-time nonviolent drug offender, but the president said she responded by spending the next two decades becoming a prison minister and “inspiring others to choose a better path.”

Trump explained he gave her clemency on June 6, 2018, but said her story is a reminder of the need for criminal justice reform such as the First Step Act, a landmark piece of bipartisan legislation. Although some Democrats and progressive clergy members argued the bill, which allows thousands of people to earn an earlier release from prison, didn’t go far enough, it enjoyed passionate support from many faith leaders — particularly evangelicals— and passed overwhelmingly in the House and Senate before being signed into law in December.

“Alice, thank you for reminding us that we always have the power to shape our own destiny,” Trump said, calling her a “terrific woman.”

As he spoke, Johnson, wiping away tears, stood and waved to the crowd. Virtually every lawmaker in both parties rose to applaud.

“America is a nation that believes in redemption,” the president added.